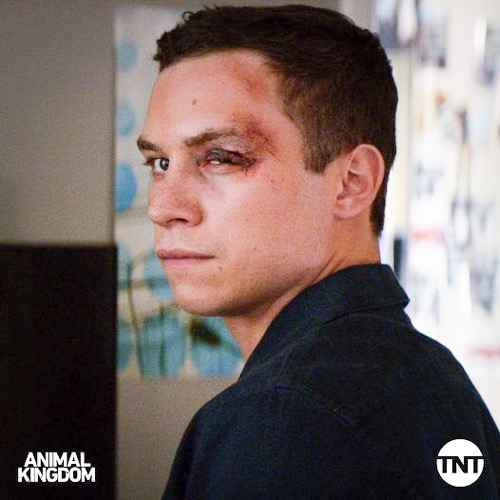 Tonight on TNT Animal Kingdom returns with an all-new Sunday, August 29, 2021 episode and we have your Animal Kingdom recap below. On tonight’s Animal Kingdom season 5 episode 8  called, “Gladiators” as per the TNT synopsis, “Pope helps a new friend; Deran, J, and Craig deal with the fallout from past mistakes as they make new friends and enemies.”

In tonight’s Animal Kingdom episode, the episode begins with young Smurf, she is trying on a diamond bracelet in a jewelry store. All of a sudden, three people walk into the jewelry store and start spraying for termites, they are masked. Smurf complains about the smell, the manager of the store tells him that she has to leave the smell is so strong.

She walks out and the three pull out their guns and proceed to rob the jewelry store. Meanwhile, Smurf gets into a truck, the three masked gunmen leave, but not before stealing a surveillance video. Smurf is actually in the getaway vehicle, Janine was one of the masked robbers.

Fast forward to the present day, Pope gets out of his truck, he has a gun in his hand and he is at Liam’s house, he finds him swimming in the pool and pulls a gun on him. Henry is in the kitchen studying, Pope scares him by being there and tells him that they have to go.

J is looking for Deran and can’t find him, he leaves him a message to call him. He heads over to see Craig and tells him that he can’t find Deran. He tells him that Livengood’s card made it into Pete’s hand. Craig says Deran dealt with the Adrian problem. J tells him that Deran made him move the coke. J says, Adrian was Deran’s problem and now he is all of our problems.

Craig does some coke, then smashes a beer at Cody’s door. Then we see Pope, he has Liam and Henry in the truck and Liam says that Cassie is a shit mother. Pope pulls over, pulls out his gun. Pope walks him out in ta desert area, Liam has his hands and feet tied. Pope takes a kind and throws in the distance and leaves Liam a bottle of water.

Craig shows up at the bar, he tells Deran that Pete flushed the coke. The two argue and Craig walks out saying he is sick of this crap.

Back to young Smurf and the holdup. They blow up the van in the desert and take off in another vehicle.

Craig goes on a coke-fueled robbery spree. Jake’s wife shows up at the trailer, she is furious with him and goes to get a baseball bat to take to him and anything else that she can hit.

J meets with Lark, she tells him that he and his uncles have to sign an addendum giving them equal shares and control of Smurf’s estate. He asked how long it would take to split everything and the lawyer advises that it would be easiest if his uncles just bought him out. Smurf goes over and grabs her by the hair and threatens her and tells her that she banged her husband.

Henry asks Pope if he killed his father he says no. Henry asks why Pope is doing this, he says cause kids should be with their mothers if their mothers are good. On Craig’s killing spree, a guy shoots at him and he loses the money he stole.

Pope delivers Henry to Cassandra, he gives her some money and tells her to leave, she needs to make her way to the Canadian border.

Deran pays a visit to Pete and calls him a liar. Pete tells him the next time he, his nephew or his brothers show up, they are not going to be leaving.

Deran, Craig, and J finally meet up at Cody headquarters. Deran tells J that he told him to move the coke, not move it to Pete’s. Deran hits J for saying he didn’t have the nerve to shoot his boyfriend and all hell breaks loose with the three of them. The three end up in the pool fighting until Pope almost drowns.

Later J starts packing his bags, Pope returns and finds a mess. Deran comes outside and Pope asks what happened, Deran says he has been gone a long time and asks where he has been. Pope says he is home. Deran asks if he is going to continue acting like a psycho or did he get his shit together, they hug. Deran and Craig are attending to their aches and pains, Craig straightens out Deran’s nose that is crooked, then says it is still hideous.

Pope sees J packing, asks where he is going. J says he is leaving, Pope says he is not, put his stuff back. Pope then says if he leaves, he will find him.