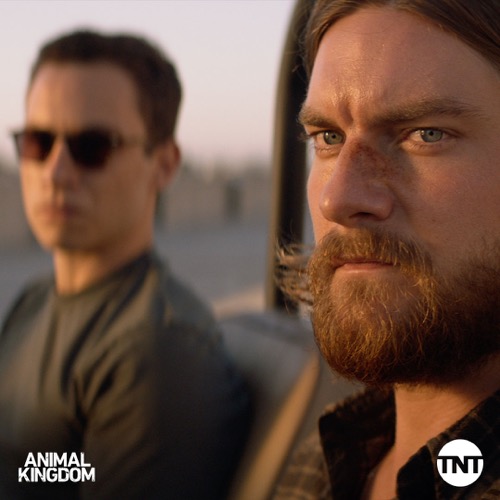 Tonight on TNT Animal Kingdom returns with an all-new Sunday, September 5, 2021 episode and we have your Animal Kingdom recap below. On tonight’s Animal Kingdom season 5 episode 9  called, “Let It Ride” as per the TNT synopsis, “Local law enforcement turns up the heat on the Codys as further secrets threaten to destabilize the family; Deran gets some news about Adrian; Craig discovers Renn has been keeping a secret.”

In tonight’s Animal Kingdom episode, the episode begins with Ren in the shower and Craig decides to join and have sex while the baby is sleeping. People are cleaning up the house, getting rid of some of Smurf’s things. J gets a cheque for $530,000.00 for selling the condo.

He also got a postcard from Cassandra. J. goes to see Deran and tells him the condo is sold, he says he can pull ten grand for each of them but it will take a few days. He says he has a way to wash the money so they can avoid taxes. Deran sees Pope getting rid of Smurf’s things, he says he is doing it because he doesn’t like the stuff. Deran leaves, he tells J they will talk later.

Ren is making pancakes, he gives her a stack of money. We jump young Smurf, Manny is MIA and she and Jake have to do a job to pay off his gambling debts. Smurf asks him if he is trying to get back in the house, and just then her inside person at the strip joint comes out, she is Baz’s mother, and this was their job, they are going to rip off the place. Later, they find Manny beaten up, he says Peter did it. Manny tells them that he is into Pete for ten grand. Smurf wants to know where to find Pete.

Present-day, the boys show up at a skateboard race with drinks. Deran is annoyed when the other bar owner, Parker, shows up with t-shirts and when he gives one to Deran he says he will wipe his butt with it later. Parker invites them to the bar later, drinks with him. Deran burns the shirt and the cops show up.

Chaswick pulls over Pope and J who tells him that he has the police files for six hours, he goes on to say where to find them.

Craig and Deran are at the bar, Craig notices that he is losing business to Parker and wants to do something about it. Pope gets new furniture and accents for the house, specifically Smurf’s room that he is taking over. He makes the bed and sits down, looks at the photo of him as a child with Smurf and his sister.

Craig goes to see Carlos, he wants him to redirect all his stuff to Deran’s bar and tell everyone else to do the same and he will double his pay. Carlos lets slip that Ren is still slinging.

Deran and J find Baz’s murder file. The boys look over the files together, they are looking for information on Livengood and find out that Jake is an associate of Smurfs.

Smurf meets with Pete about Manny, she goes inside to speak to him, Jake stays outside. She pays him the 10 grand that Manny owes him and she tells him that she wants to work with him, she is looking for opportunities.

Craig is back home, he calls for Renn and she is not there. He searches the house for her stash and finds it in a tampon box.

Deran and J meet with Chadwick to work with him, offer him one grand a month and he says that he says that he is worth more than that. Chadwick wants two grand, he shared that the DEA plans to get Deran for aiding and abetting for the money he is sending to Indonesia.

Craig confronts Renn about her drug dealing, he is furious, she slaps him when he calls her a shitty mother. They continue in a heated argument.

Pope meets up with Chadwick and asks him why he wants to work with his family. Chadwick says public service is overrated and asks if they have a problem.

J meets with Lark, he gives her money to retain her services that they may need when they expand their services, someone who is creative. She says she is a legit attorney. She flirts with him and asks if he ever smiles, he smiles for her. She says she will make a few calls.

Deran meets Adrian’s sister Jess who has been sending money to Adrian in Indonesia. She thought her process was foolproof. She tells him that Adrian loved him, believed in him. he tells her to stop sending money, she wants to know if it is a threat, he says yes, but not from him, from the DEA.

Pope tells Deran that he is taking all Smurf’s shit out. Deran apologizes to him, that he had to come back to all this, the DEA, Livengood. He should have taken out Adrian, Pope tells him there is nothing to apologize for.

Craig is at the bar, Deran shows up and he tells him that Ren left him and took Nick. Deran tells him that she will come back, they have a kid together. Parker shows up to confront Deran and Craig takes the first hit, they end up fighting.

Smurf tells Manny that he paid Pete and he can pay her back later; the beginning of Smurf building her empire.

J shows up at the bar after the fight, he tells Deran and Craig that he got them an attorney.