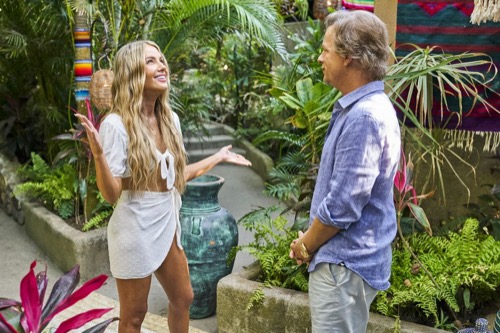 Tonight on ABC after weeks of drama, romance & more Bachelor in Paradise airs an all-new Monday, August 10, 2021, episode and we have your Bachelor in Paradise recap below.  On tonight’s Bachelor in Paradise Season 6 Episode 12 as per the ABC synopsis, “It’s time to return to Bachelor Nation’s favorite beach as a new batch of sexy singles make their way to paradise in hopes for a second – or third – a chance at love.

With the resort officially open, former fan-favorite bachelors and bachelorettes are ready to find their match while living together in a tropical oasis in Mexico. Twenty-three hopefuls kick off their journeys on day one, but will additional arrivals get in the way of their search for love?”

In tonight’s Bachelor In Paradise, the episode begins with Karl, Tre, Tammy, and Serena P. who sent Matt home and has no regrets. Brendan who was on Taysha’s season, but told her his heart wasn’t whole and he was broken at the time. Tahzjuan overheated the last time in paradise and couldn’t even think about love, but here she is again. Ivan was on Tayshia’s season as well, he is ready to be engaged, but Taysha has a different vision of who she wanted her husband to her

. Queen Victoria is back, Victoria L. from Matt’s season and since then she has had a rebirth, the queen is dead and now she says she is a blond goddess. Mari is back from Matt’s season, she says she is known for having a big butt, she is so excited to be in paradise and her goal is to have a ring on her finger. Kenny shows up naked and says he is in the best shape of his life at 40, with no clothes and no cares, he is going to bare it all. Kelsey is back, you will remember her from the champagne gate, she is not the same person that we saw in Peter’s season, she is not looking for someone to fill her holes.

Connor B. showed up in a cat costume in Katy’s season, and he is so excited for paradise, he hopes the chemistry is there. Jessenia put everything out on the table with Matt and she says she deserves validation and to be happy. Grocery Store Joe is back, he dances, he makes pasta – he was on Bachelor In Paradise 5, his father tells him that he hopes he meets someone, he wants him to have grandkids before he is dead.

Host David Spade welcomes viewers to the show. Abigail is the first to arrive in paradise, she was on Matt’s season. Grocery Store Joe is the next one to arrive, he tells David that his past relationship worked for two years, he is looking to leave there in a relationship. Abigail wasn’t expecting to see Joe, but he is really good looking and she is excited.

The next one to arrive is Ivan, David tells him that he is a fan favorite. Serena P. is back and both guys are excited because they have a crush on her. Kelsey is next, she brings a bottle of champagne for David Spade – he thanks her for the present and tells her to have a good time. Brendan arrives and the women think he is really hot, he is a major upgrade to paradise according to Serena P. Next is Natasha from Peter’s season. Tammy is there, she meets David Spade and says he looks like John Paul Jones, then she calls him Dave Shepell.

Aaron is from Katie’s season and the girls are happy to see him. Kenny arrives and David is surprised that he shows up naked. Natasha says she is enjoying the scenery. Tammy gives him her shawl to put around him. Noah just arrives and he wants to get to know Abigail.

Noah and Abigail have a chat, he says he is looking for someone to vibe with it and he was looking forward to meeting her. The vibe on the beach is chill and people are already connecting. Connor B. arrives next and he is from Katie’s season. Meanwhile, Grocery Store Joe is having second thoughts, still not over his broken relationship, and thinks maybe he should not have returned.

Victoia L. arrives, she tells David that the queen is dead and the goddess has arrived. She is looking for her sun God so she can rule the beach with him. Jessenia is looking at Victoria like she lost her mind. Wills tells David that Serena P. seems to be one woman who a lot of men are into to. They look over and Joe is taking a nap. David says he is going to fire when he misses greeting two more women, one of them is Mari and she has her eye on Kenny. Tahzhuan arrives and she is thrilled, David is there to greet her, she was there before, this is her second try. Tahzhuan walks down the steps and Tre gets up immediately, he loves her confidence.

She knows him because she dated his uncle who she met on a dating app, and she tells him that they kissed. Tre says it is like a twilight zone scenario. Jay is next and he goes right down the beach and takes off his shirt, the girls are all staring at him. Karl arrives and says paradise has officially started now that he has arrived. Tahzhuan is not impressed with Karl, he wears a watch and tennis shoes on the beach. David comes down to the beach and calls everyone to the living room for a meeting.

He says he won’t be taking his shirt off. He is going to bring out Wells, his partner in crime. Wells is the bartender, and he is in his fifth season. He says anything is possible in paradise. The rules are simple, you find love or you go home. There will be new people coming in all the time. If they don’t get a rose during the rose ceremony they are going home. Some weeks the men will have the roses and some weeks the women will, this week, the men will have the roses.

The pressure is on for the women, they don’t know who is interested in who, but they need to make a connection if they are going to stay in paradise. Deandra is scared, she doesn’t want to go home and knows she needs to make a connection quickly. Tahzhuan tells the girls that she dated Tre’s uncle, but she had a pretty good conversation with Tre, she hopes he gives her a chance. Kenny and Mari hit it off right away, but she doesn’t want to get too comfortable early on just in case he is not on the same page.

Abigail gets a dates card, she picks Noah and he says yes. Everyone is feeling for Joe, he looks a little lost in paradise, he probably underestimated how surreal it was going to be. Joe is actually wondering what he is doing there, he doesn’t want to be there to just hand out, if he can’t find anyone he is interested in, he will leave.

Abigail and Noah are on their date, they start with drinks. She tells him that she friend zones guys really easily and is trying not to do that. Meanwhile, Connor B. is taking it one step at a time since Katie says she wasn’t impressed with his kiss.

Maurissa says Katie is wrong, Connor B. is a great kisser. Tahzhuan is with Tre, he leans in for a kiss, she says it is ten our often, and she is cut off guard – she really enjoyed it, more than his uncle. Back to the date, Noah tells Abigail that she needs to relax, she is guarded and holding. Noah loves his first date with Abigail, he leans in for a kiss and is convinced that he is out of the friend’s zone.

Joe is wanting to go home, but finally finds a friendship brewing with Serena P. and just might change his mind. Everyone is watching them fully cuddling. Joe liked his kiss, and now he does want to stay. Serena P. tells him that she really didn’t think she was going to make out with anyone on day one, maybe day two.

David stops by to see Wells and asks for all the gossip. Wells said they had the most makeup sessions in the history of the show.

Kelsey is more social today, she knows there are ten men and thirteen women and she doesn’t want to go home.

Demi is back, David says he has seen her on the show before. She is so excited to be back and David is looking for chaos.

This season of Bachelor in Paradise is nothing like we have seen before. We get a glimpse at the future and it looks like Joe falls in love. The focus of being in Paradise is to find love and there looks like there is a lot of it. The biggest twist, Kendal is back and is there to stir up some trouble. There are going to be a lot of tears and a lot of broken hearts. David says he is in a mansion, that part is fun, crabs are all over the place and they are horrible