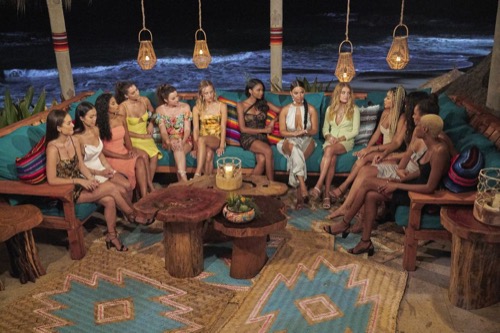 Tonight on ABC after weeks of drama, romance & more Bachelor in Paradise airs an all-new Tuesday, September 14, 2021, episode and we have your Bachelor in Paradise recap below.  On tonight’s Bachelor in Paradise Season 7 Episode 8 as per the ABC synopsis, “Heading into the long-awaited cocktail party, five women prepare to be sent home, but first, they’ll have to make it through one of the craziest nights in Paradise history. Starting off with a bang, the beach’s most controversial couple faces a reckoning they can’t come back from.”

In tonight’s Bachelor in Paradise, the episode begins with the women talking about tonight’s third rose ceremony, the guys have the roses this week. Demi says the potential five women that would be going home are her, Natasha, Jessenia, Chelsea, and DeAndra. This is the most amount of girls that are going home thus far. Natasha’s paradise experience so far was all based on lies because she spent all her time with Brendan. Demi says nobody is mad at Brendan because they are all friends with him, but Chris pretty much did the same thinking and everyone was against him. Natasha is shocked that nobody is mad at Brendan for what he did. Overall a lot of women are nervous. Jessenia is upset, Chris played a game and she was a pawn.

Time for the cocktail party, Tituss Burgess joins the singles and confirms that they are there to find love. He tells them that five-woman will be going home. It’s pretty bizarre that nobody has called out Brendan and he was way worse than Chris. Natasha is looking forward to closing the door on Brendan and Pieper. She is sitting with a group and tells them about how Brendan downplayed his relationship with Pieper, and he spent the day before he went to the island with her.

Joe is shocked, to him, it is like Brendan played a game and Natasha paid for it. If it were up to Maurissa, Pieper and Brendan would go home tonight. Joe says they need to have a conversation with them. Joe and the group of women head down to speak to Brendan and Pieper. Joe tells them that they need to settle this. Joe says people feel like Brendan and Pieper had a relationship prior to the show, this was pretty much set up. Brendan says they went out to dinner two or three times before coming to paradise, they weren’t exclusive. He says he never promised Natasha that they were going to be more than what they were.

Brendan admits that he saw Pieper the day before he left and the reason why he was there is that he has spent more time with Pieper there than back at home. Pieper said that she came to paradise to spend time with Brendan. Natasha tells Brendan that he came to the island at her expense and it was awful. Brendan says he has said everything he has to say on the matter and they have nothing more to talk about.

Brendan thinks it is a pathetic attempt to attack him and he tells Pieper that Natasha had zero chance of having a relationship with anyone there. In the end, Brendan and Pieper leave the island and everyone left there couldn’t be happier. At the bar, Will says the only rule is not to go on the show with a boyfriend or girlfriend. In the car leaving, Brendan says he didn’t want to mislead anyone, he just withheld information.

Thomas had a good date with Becca and feelings developed, and he didn’t feel guilty about it so he tells Tammy. Aaron told Tammy that she was going to regret this, now she has to own her mistake and move on. Tammy asks Thomas why he doesn’t feel like they could get there. He says he is trying to picture if he can go the long run with her outside the island and he doesn’t feel like they could.

Things feel more stable with Becca. She says she trusted him with everything and now she feels like a fool. He reassured her and she gave him her trust. Tammy walks away crying saying she gave him everything. Then, we see Thomas making out with Becca. Demi says Tammy is having the worst birthday of her life.

Time for the roses to be given out, Wills joins the singles and says that this week they were faced with the hard truth. Some people were lying to them, some people were manipulating them, and that is not ok. He says it doesn’t sit well with them, that one person, in particular, had their opportunity for love town away from her. He has an extra rose and he gives it to Natasha to give her another chance.

Now with Natasha having a rose, only four women will go home. Riley gives his rose to Maurissa, Joe to Serena, and thinks they are the strongest couple, Noah to Abigail, Kenny to Mari, Ivan to Kendall, James to Tia, Thomas to Becca, Aaron to Chelsea.

Tammy says if she knew it would end up like this she would have not chosen Thomas over Aaron. Tammy says it was the worst birthday ever. Demi says it was embarrassing, she spent so much time on Kenny and it is so frustrating. She can’t believe that Kenny was kissing Mari in front of her. Joe says the problem with Demi is that she puts on a front and if he peels back the layers, she is sad, he hopes she finds someone.

Lil Jon arrives on the island and greets the singles, he tells them that he is the new host this week and he is there to help them all fall in love. He announces that he is bringing in more dudes, he is going to make it rain men.

The next day, Natasha feels relieved that she got a rose and is still there. Down the stairs comes Blake, he was on Clare’s season. He doesn’t have the luxury of time, so if he sees someone he is interested in, he is going to pursue it. Tia says Blake is got, Natasha likes his tattoos. Riley says he is a stud and no doubt someone will want to go on a date with him. Blake reads his date card, “get ready for the ride of your life,” then he asks Tia to go talk.

James asks if he should pack his bags now, he finally found someone that he was hopeful with. Tia tells Blake that James gave her a rose the night before. Blake says he is putting his best foot forward. Blake asks Tia if she would like to go on the date with him, she says she is ready and walks away with him, not even a backward look to James. James asks Becca if he should be worried, she says she doesn’t know.

Later, James tells Aaron that things don’t seem to be working out for him on the island. ON the date, Tia and Blake go rough riding on dirt roads. Blake is driving and Tia is screaming the whole way. They finally stop and sit down on a bench to enjoy a drink. She tells him that she feels comfortable with him and that is huge to her. He says he feels the same, he chooses her for a reason and doesn’t want her to think she is competing with anyone. They kiss and then get down to their bathing suits.

James feels defeated, if Tia comes back with Blake and they hit it off, he doesn’t have a romantic connection with anyone else, it is tough. Kenny says that he has never felt for anyone the way he has felt for Mari, he is happy he has had so much time with her. The two head to the boom boom room.

Dr. Joe arrives on the island, was on Taysha and Claire’s season and they both rejected him. He has a date card, “paging Dr. Joe, it is time to find love.” He asks Natasha to go for a walk. Mari is hoping that Natasha gets this date, she deserves it. Riley says someone please pray to paradise Gods and let Natasha have this date. In the end, Dr. Joe asks Natasha about the date. He asks her where Brendan went. Back to the other singles, the men hope that Natasha doesn’t talk about Brendan because he is friends with Dr. Joe.

Back to Natasha and Dr. Joe, she tells him that she doesn’t want to get into too much detail about Brendan because she knows they are friends. She says that Brendan almost ruined the whole experience for her. She tells him a bit, and he is shocked. He says he didn’t know that Brendan was dating Pieper, he is sorry that she went through that. Natasha can see the conflict on his face after telling him about Brendan. She can tell that it is over and it sucks.

The next day, Serena admits that she is falling for Joe, but doesn’t want to say the “L” word yet. She does admit it is a little awkward dating Joe with Kendall on the island with them. She was hoping to shut off her history with Joe, but she is having a hard time.

Joe sets up some romantic time on the beach with Serena alone. She tells him that she wants to tell him something but she doesn’t know how he is going to respond. She says she is falling in love with him, he says he is falling in love with her too. Kendall is watching the two and it is heartbreaking. She tried to move on, create new memories with new people, but that didn’t happen. She doesn’t know how much longer she can do this, she feels incredibly painful and vulnerable.