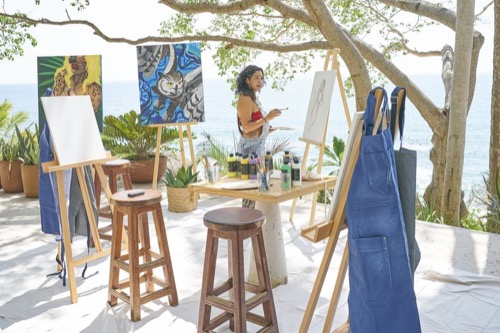 Picking up right where we left off, a devastated Kendall shares a tearful confession with her former beau, but a coupled-up Joe just can’t tell her what she wants to hear. Then, guest host Lil Jon attempts to turn up the heat, bringing in two new guys who are ready to make up for lost time.”

Tonight’s Bachelor in Paradise episode begins with Joe and Serena down by the beach kissing and Kendall watching 150 feet away and watching their love unfold. Kendall is clearly upset, Noah thinks she is unraveling. To see Joe and Serena falling in love in front of her can’ be easy, James says he couldn’t do it. Kendall goes to speak to Will, she says she has done a lot of crying, she is having a hard time and she doesn’t want to react in front of everyone. Will asks her if she is afraid she will compare everyone to Joe.

She says yes, but she hopes she doesn’t. Will says he knows this is hard for her and he is sad for her. She says she wants to talk to Joe. Kendall walks to the beach and asks Joe if they can go have a talk. Kendall is determined not to let Serena’s feelings for Joe get in the way of her happiness. Joe tells her that he sees something is off with her. She says it is mainly because of him. She goes back to how they first met there and she loves how things used to be and she feels like he is still her best friend. He asks her if she is over them, she says don’t ask her that but she admits that she never stopped loving him. Joe reaches out for her and hugs her, she cries in his arms and he says he is sorry and he is there for her.

The two continue talking, Joe tells Kendall that she is going to be ok. Joe asks her why she came there, she says for the same reason that he did. She feels like she is always going to have a love for him. He says the reason he came there is that he knew it was over between them and if he didn’t feel that he wouldn’t have. And, he was under the impression that she felt the same way. But, she was a big part of his life and he is always going to care for her. They finish talking and Kendall tells the other women that she is leaving.

Joe says this is hard, this is where they fell in love and he understands that her feelings came back but she should have told him that she wasn’t over him before he came there. Now, he has feelings for Serena and doesn’t want to let that go. Joe goes to speak to Serena and updates her, she understands. He says it is hard to see someone he cared about hurt. In the limo, Kendall says it is devastating, Joe is her person. She feels absolutely broken and this is the hardest thing she has ever had to go through, she has never experienced this before.

Ivan is alone and he says he should have known. He gave Kendall his rose last week, he definitely should have taken a different route and now he doesn’t know who he is going to get a rose from. If Ivan doesn’t figure something out he is probably going to go home.

Back at the beach, Dr. Joe is playing the ukulele. The guys are making bets, they think Natasha is going to dump Dr. Joe and keep Ed. Natasha is really excited about Ed and they seal their date with a kiss, she couldn’t be happier right now, finally, she says.

Noah planned a special date with Abigail, there is a lot that he wants to talk to her about. Just then, Kenny gets a date card and asks Mari to go on the date with him. Riley says Kenny has been wanting to take her on the date so this will be good for them. Mari is excited, she is open to an engagement, but Kenny could choose not to propose. The two put on aprons for their date, they are going to be eating tacos off each other and it is right up until Kenny’s alley since he loves to be naked.

Kenny lies on the table and Mari starts making tacos right on top of him, she loves what she is working with. She rubs sour cream all over his legs, she discovered a new turn-on. Now it is time for Mari to get naked, she lies down on the table and starts making tacos on top of Mari. He says Mari is the hottest plate that he has ever seen and behind closed doors, she is a freak. Mari says she will never be able to eat another taco again without thinking about this date. She says she is falling in love with her and tonight she plans on telling him, she hopes he says it back.

Back at the beach, James doesn’t think he has a strong enough relationship with Tia so he plans some quality time with her. Sad for James, Tia is not getting the tingly feelings that she gets when she is with Blake.

Back to Kenny and Mari, he wants to make sure they are on the same page. He cheers to finding something that he didn’t even know what he was looking for. He feels different with Mari, more so than he has ever felt in his life. Kenny tells her that he is falling in love with her and he has only said that to his dog. Mari laughs and tells her that she feels the same, she is super giddy to find out what comes next, she is really excited.

Maurissa really likes Riley, he makes her feel really good but she needs more from him. She tells Chelsea that he really hasn’t expressed anything to her, it is like he is holding something back. Maurissa speaks to Riley and he finally opens up. A lot of his issues are his family, his parents divorced when he was young and his father wasn’t good to his mother and it breaks his heart.

When he sees her talking to another man, he doesn’t like it, he thought he would be ok but he wasn’t. He does care about her, and he has been in love before and he sees himself going that way. The two tell each other that they are falling in love with each other.

Everyone is gathered at the beach and the crew comes in and announces that a tropical storm is coming their way and everyone needs to pack their bags they are evacuating. Becca thinks it is a big deal for them to shut them down like that. The storm passes and everyone is excited that they can return to paradise. They arrive on the beach and Lil Jon is there, he tells them the cocktail party is in one hour.

At the cocktail party, Lil Jon says that he heard the “L” word flying around. Joe admits that he and Serena did it. Kenny says he had Mauri have talked post-show, what that would like. The ladies are in control of the roses this week and four guys are going home. Tia is going into the Rose Ceremony torn between two guys. She goes to speak to Blake and tells him that she wants to be pursued. She tells him that James is making an effort, but he doesn’t. Blake feels blindsided, he doesn’t think he can navigate this.

Ivan is rose hunting and grabs Chelsea for a talk, they end up kissing and holding hands and Aaron is not happy about it. Aaron gets up, he asks Aaron for a quick word. Then he tells him that he lied to his face, he said that he was not going to go after Chelsea.