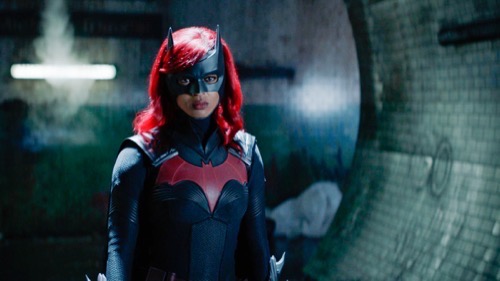 Tonight on the CW the series Batman airs with an all-new Sunday, January 17, 2021, season 2 episode 1 and we have your Batwoman recap below. On tonight’s  Batwoman season 2 episode 1 called, “Whatever Happened To Kate Kane?” as per the CW synopsis, “Kate’s friends and family hold on to hope that Kate may still be found, a homeless 25-year-old named Ryan Wilder (Javicia Leslie) stumbles upon Kate’s Batsuit.

Focused on no longer being a victim, Ryan takes the suit to use as armor and goes rogue in the streets of Gotham, taking out various members of a new gang called the False Face Society.”

25-year-old Ryan Wilder is sleeping in a van, she is dreaming about moving her mother into an apartment when she wakes up to a commotion outside. Meanwhile, Mary radios Luke and asks if Batwoman has checked in, she hasn’t so Mary heads over to the bat cave. The commotion was an airplane crash, Ryan is trying to revive a survivor.

Luke tells Mary that Kate was supposed to land twenty minutes ago, the plane crashed. Ryan finds Batwoman’s suit, mask and wig. The police, fire and ambulance are now on the scene of the crash, along with Jacob who just arrived with Sophie who says they will both look around together. We see Alice, she is just standing there with her fist clenched.

Luke tells Mary that Kate probably survived because of the suit, Bruce Wayne walks in and says he came as soon as he heard. Luke tells him it has been four years, where has he been. Mary’s dad is checking in on her, she has to leave. Bruce tells Luke that they really changed the place, he tells him to go down to the bat cave with him.

Ryan is in a meeting, she tells the woman that she doesn’t have a home or a job, nobody wants to rent or hire an ex-con. Nobody cares that the dope wasn’t hers or the crows were dirty or that is a decent human being.

Julia sits down with Sophie, there is still no news on Kate. Jacob tells the commissioner he is not giving up, he will send more men. Mary walks in and he tells her they have changed the search to a recovery. Mary tells him he can’t listen to them, these are the same people that told him not to look for Beth. She is not losing hope and she doesn’t want him to either.

In the bat cave, Bruce makes a slip up in front of Luke, he knows Beth is Alice, Luke is surprised. Bruce says of course he knows, they are cousins. Bruce asks where is the suit. Little do both of them know, Ryan is trying it on right now and says it is time to be powerful.

Alice visits Bruce aka, Hush pretending to be Bruce and he tells her that he kept his end of the bargain, but Alice is upset, she wanted to kill Kate.

Hush tells her that she wanted her dead, and she could have shot her months ago. Alice says she wasn’t going to shoot her, she wanted her dead. She had it all planned out, calculated and precise. She reminds him that he is still Tommy Elliott and if she so much as breaths a word, he goes from Bruce Wayne to the guy without a face.

Sophie is upset, she is look around to see if Kate got any death threats. Julia is there, she says that Kate told her if anything happens to her to check her safe; but she is not willing to tell Sophie where it is.

Mary and Luke are in a tunnel, they see Batwoman and call out to Kate. To their surprise, it is not Kate, and the “new” Batwoman says that she saw Kate’s plane go down too. She introduces herself as Ryan and says she is not done with the suit. Mary tells her that the suit was not meant for the lost and found. Luke tells Ryan that she knows nothing about the woman who wore that suit. Ryan says that she was number one to the mom who adopted her, and she was murdered, and that is something she cannot live with, she is keeping the suit until her murderer is dead.

Bruce walks right past Julia and she calls out to him, they hug. He says he is good and “good seeing you Jules.”

Ryan is reading an article on Kate in the Gotham City Gazette while Mary is reading up on her and she finds out that her mom was killed by the Alice in Wonderland gang, that is why she wants the suit, to go after Alice. Her mom died in her arms, she wants justice. Then, Mary tells Luke they will find Kate, he says she needs that suit to survive and she is dead because of him.

Julia calls Luke and Mary, she figured out that Bruce is not Bruce, he is Hush with a new face. Luke can’t believe it, how didn’t he see this, Bruce is his friend. Meanwhile, Bruce is in the bat cave and shooting at the walls to find the secret door that leads to the bat mobile. He gets inside and drives off just as Luke and Mary return to the bat cave.

Jacob has a gone pointed at Alice and asks her if she knows where Kate is. She says she is gone, this is his queue to get a new life – Batwoman is dead and she died knowing her father hated her.

Luke gives Ryan a heads up that someone is coming for her, Bruce, aka Hush. He tells her that he wants the suit and if he gets it, he become the most powerful person in Gotham, she has to outrun him.

Ryan is in the suit, out of her van, she drops down behind Bruce and tells him he is not Bruce Wayne, and he tells her, she is not Batwoman, them he shoots her. They fight, and the back door to the van opens, he grabs something that looks like an urn and tries to hit her with it, the two get into a fist fight and she beats the face right off of him.

Ryan gives up the suit to Luke and Mary, along with the kryptonite. She says she is sorry about Kate and she hopes they find her. The suit is bigger than her it is one thing to put it on, it is another thing to wear it and she is not a super hero like Kate.

Julia asks Sophie if she is still in love with Kate; she says she doesn’t know. Julie gives Sophie what Kate left in her safe, it is an envelope addressed to her. Meanwhile, Jacob lights of the sky with the bat signal. The letter says that Kate was Batwoman, and she didn’t tell Sophie because she loved her and wanted to protect her.

Alice is seen in the tunnels, a paper plane flies near her and written on it reads, “consider us even, Safiyah,” and it is written on the Gotham City Gazette issue where the headline reads, “whatever happened to Kate Kane?” She then lays down beside Mouse, who is laying on the ground and says it is a good thing he is dead already, there is a war coming to Gotham and there is no Batwoman to stop it.

Ryan is looking up at the sky, she sees the bat signal. She looks down at a plant and tells her mama that she did the right thing and will try to continue to do so. She looks down at her chest, she has a wound, it is green and looks like is travelling in her system.