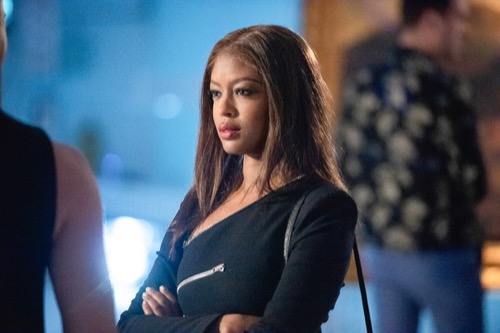 Tonight on the CW the series Batman airs with an all-new Sunday, February 21, 2021, season 2 episode 5 and we have your Batwoman recap below. On tonight’s  Batwoman season 2 episode 5 called, “Gore on Canvas” as per the CW synopsis, “Batwoman (Javicia Leslie) is approached by Commander Kane (Dougray Scott) and Agent Moore (Meagan Tandy) to boost an infamous work of art that reveals the way to Coryana – and Kate. Despite her reservations, Luke (Camrus Johnson) and Mary (Nicole Kang) convince Ryan to take the assignment, causing tensions within the Bat-team to escalate.

Meanwhile, as Alice (Rachel Skarsten) attempts to fulfill Safiyah’s (guest star Shivaani Ghai) insidious request, she slowly discovers that she may not remember everything about her time on Coryana.”

On tonight’s episode of Batwoman Jacob is speaking to man and asks about a Jack Napier painting. The painting is being by the Collective, a private club of connoisseur. All of a sudden, the man is killed by another. Two crows show up to save Jacob. Jacob tells the man to tell Safiyah, who he works for, that he wants his daughter back, batwoman appears and captures the guy.

It’s morning, Ryan is with Angelique who gives her a gift, matching bracelets for the two of them. Angelique notices an injury that Ryan has, she encourages her to go look after it. Ryan goes to see Mary, who tends to the wound. She asks Mary not to mention it to Luke, he questions everything about her.

Luke tells her that if Alice finds Ocean before they find Coryona, Safiyah is going to give Kate to her and she is going to kill her. The guy they captured wasn’t after Jacob, he was after the guy he killed in the alley, who is an investment analysis with no record.

Jacob tells Sophie they have a new lead on the Napier, Evan Blake, old friend of Kate. A likely member of the Collective who may cooperate. Sophie interviews him, he says Kate saved his life, she helped him to come out. He says he is there for them. They tell him that they think if they find the artwork, they will get closer to where Kate is. Sophie tells him that Kate was looking for canvas painted by Jack Napier. He says the Kate he knew didn’t give a crap about art. He tells them that he loved Katie but this feels like entrapment.

Batwoman and Sophie meet, Sophie tells her that she wants to make a deal. She gets everything they know on Safiyah and Coryana, and they get access to her prisoner, who knows where Kate is being held. Sophie says Kate is the love of her life and she needs her help to get her back.

Later Ryan meets with Luke, she tells him about the night when she was arrested for drug possession, they weren’t hers. He tells her that the crows killed his father, the worst thing that ever happened to him. Ryan hugs him. He says he will never forgive them and doesn’t want to help them, but they need them to help them.

Jacob and Sophie are in front of the prisoner. She mentions Ocean, Coryana, Safiyah and the painting. Jacob asks a few questions, but the guy had a cyanide capsule in his mouth and he is dead.

Alice is at a bar with Ocean, he says he grew up in nature where everything was cultivated. She asks him where he comes from, he doesn’t saw, he pays and says he has to leave, he is meeting an associate. Before he leaves, she asks him if they met before, he says no.

Alice is in front of a door, she has a knife and someone comes up behind her and hits her. It was Ocean, he has her now tied to a chair. She tells him that some lunatic from a far away island has her sister and won’t hand her over until she has him and has air mailed the evidence. She tells him it is Safiyah. He says he called her sister.

Ryan is all dressed up to attend an art collector event, Luke tells her the have VIP access. Ryan is at the event and she sees the target, she walks over to it so Luke an get a good look at it and scan the painting. Luke tells her that she needs to steal it.

Ocean is packing his things, he says Safiyah isn’t his blood sister and he knows that she wants him dead. He tells her that Safiyah must be desperate if she sent her; she didn’t have to make small talk at a bar first.

A masked villain comes into the art exhibition, it is Wolf Spider. Batwoman goes after Wolf Spider and the two get into a fight over the painting. Wolf Spider not only eludes Batwoman, and security as well. Batwoman jumps off a landing and hurts that wound that she already had. Securty runs him down, grabs the painting and leaves Wolf Spider there, they leave with the painting. Batwoman arrives and takes the mask off Wold Spider, It is Evan Blake, she asks him if he is ok. Ryan brings Evan in to see Mary, looks like he will be ok since she brought him in on time.

Alice sees a car pull up, three assasins. They go inside and see Alice tied to a chair, Ocean is in the bathroom. They ask for Ocean and all of a sudden, she jumps up from the chair and attacks them, Ocean and Alice get away.

Sophie and Batwoman are together, they disagree with each other about the crows.

Evan is waking up and he sees Mary. She tells him that he has to find a new suit, spandex is no match for an oncoming SUV. She tells him that the crows have the painting, well a decoy copy. So, the original painting is out there somewhere and so is Kate.

Alice and Ocean are in the car, the two are hitting it off and Alice is have memories of kissing him before when they were both in Coryona. Then he tells her to grab a white tube that is in the back of the car and he says to her, have you ever heard of Jack Napier?