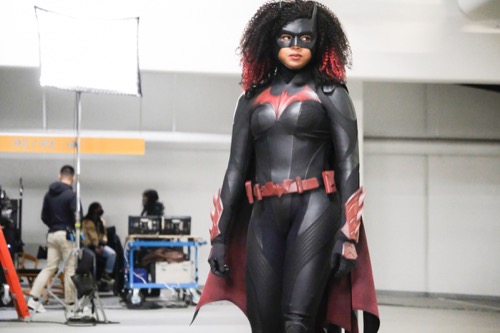 Tonight on the CW the series Batwoman airs with an all-new Sunday, March 28, 2021, season 2 episode 9 and we have your Batwoman recap below. In tonight’s episode called, “Rule #1” as per the CW synopsis, “Batwoman (Javicia Leslie) confronts Gotham’s biggest foe, while new information forces those closest to Kate to make some difficult decisions.

Tonight’s episode of Batwomen begins at the cemetery, Mary drives up and joins Jacob, Sophie, Julia, and Luke – they all take turns with the shovel, putting some dirt over her coffin.

Ryan writes Kate a letter and says it doesn’t feel right to say goodbye, but Julia spent months combing the ocean for her and they found a bone and it matched her DNA. She tells her about the desert rose plant from her mother, it is one of kind like Kate. Now, when she looks at it, she will not just think about her mom, but about Kate as well. She thought her time as a bat was temporary, but now it is permanent, and she is grateful.

Then we see someone in a mask, it sounds like Mouse and he says, “your family has declared you dead Kate Kane, but sit tight, we will make them believe in life after death.”

At the police department, Dana is interviewing the commissioner and asks if they are getting help from a batwoman’s help with a snake bite, he says they will take all the help they can get.

Mary and Ryan are having breakfast, Mary thanks Ryan for letting her crash there. Then Mary says the past few weeks have been really tough, but they feel less awful with her around.

Ryan tells her that she and Luke saved her life and they need to take care of each other. Angelique shows up, she tells Ryan that she was hoping they can talk, she wants to say she is sorry. Mary sees her exit and says goodbye. Angelique tells her she is getting out of snakebite; she wants to turn her life around and be with her.

At the Cartwright house, we see Alice sitting in the room downstairs, someone is at the door, Alice opens it and a little girl says she is there to have tea with her.

Someone shot the commissioner, Luke, Ryan, and Mary are looking at some video feed, Sophie as well.

Sophie gets in her car to leave the office and a young girl is in the back seat, she says she saw the commissioner gunned down, and she didn’t know where else to go, she feels like she is being followed. The girl refuses to go upstairs and be interviewed by the crows, she tells Sophie she came to see Sophie her sister, not Sophie the crow. All of a sudden, there is a masked vigilante and he smashes the window near the girl, another one jumps on the front windshield and smashes it, Sophie is scrambling to get to her gun. Batwoman shows up to save the day.

Jordan is starstruck by batwoman who says she knows she was tagging city hall last night. Jordan says there were three guys, two got out of the car, one in a gas mask and one in a hockey mask, and the driver, she. Jordan says the driver had a big gold bracelet with a key.

Alice is having tea with young Kate and she tells her she is not real. Alice says she asked the universe for her sister, and this is what she gets. Alice asks if she is so mentally disturbed that she conjured her up. Kate tells her she can help make her pain go away.

Ryan arrives home and shouts at Angelique that she said she was getting out, what was she thinking driving the getaway car. Angelique ask who else knows, Ryan says she does, and this is enough. Angelique says it was one last job and then they were going to let her out. She says that False Face is run by Black Mask and he will kill her before she can ever get on a witness stand. Ryan says she can protect her, she knows batwoman. Angelique says she and her comic book heroes.

Ryan shares with Luke and Mary what Angelique did. Luke is upset, Ryan looks to Mary for her to take her side and she says no, she has done this before with Kate and Alice, she won’t do it again, she should turn in Angelique.

Sophie calls Luke and tells him that she thinks Ryan has intel about False Face, and he just killed the commissioner because he spoke out about snake bite, they need to speak to her.

Angelique calls Ryan that she never signed up for someone to get gunned down. Batwoman goes to see Angelique, and she is gone, they got to her, there is blood on a lampshade. Then we see Angelique, she is tied up, there is a man hanging in front of her, dead with blood everywhere. Black Mask tells her that is what leaving False Face looks like.

Luke is able to track down where Angelique is being held, batwoman is on her way. Batwoman finds her, but they find her as well. She tries to fight them off, but fails, we then see her on a conveyor belt, Black Mask is there, and she calls him a sadistic drug lord. He tells her that his daughter was imprisoned by the crows and killed by Batwoman.

She tells him that we all have pain in their past, he can’t use it to justify killing her. He turns on a saw and the batwoman’s head is inches from getting cut off when Sophie comes inside, guns blazing. Batwoman unties Angelique, she tells her that she is safe now.

Angelique is in the crows building, Sophie is questioning her. Sophie tells her if she gives her the name of the shooters, she might be able to get her a plea deal. Angelique says she pulled the trigger, she did everything. Sophie goes to see Ryan, she gives her Angelique’s bracelet, she tells her that Angelique confessed and is going to jail. She is willing to risk her life, but she won’t risk Ryan’s, Black Mask will kill her.

Julia makes a call regarding the crash, the person on the phone says they remember her, they spoke last month. Julia didn’t call them before.

Ryan tells Luke and Mary that two days ago she didn’t know who she was outside the bat costume. She says they got each other’s back; they hold each other accountable, most importantly they stand for something bigger than themselves. She goes on to say that they are going to take down Black Mask.

Alice and young Kate are outside, Kate is digging up a grave, inside there is a wooden box, she opens it and her dead cat is alive. Alice says she is having a psychotic breakdown. Young Kate tells her the problem is that she never dealt with grief.

We see Black Mask with a woman, her name is Enigma, she goes into a locked type of cell and Kate is lying on the floor with her face all bloodied.