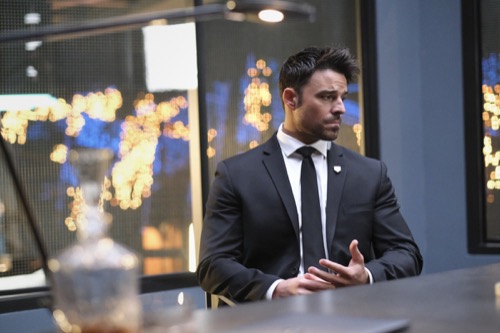 Tonight on the CW the series Batwoman airs with an all-new Sunday, April 18, 2021, season 2 episode 11 and we have your Batwoman recap below. In tonight’s episode called, “Arrive Alive” as per the CW synopsis, “With Batwoman (Javicia Leslie) and The Crows each hot on the trail of the False Face Society, their efforts collide, and tension escalates.

In tonight’s Batwoman episode, the episode begins with Batwoman thinking Sophie stole a car she was looking for. Sophie is undercover and Batwoman burns her cover. Sophie says they IDd the driver and brought him into custody, Black Mask is at the location on the phone she is holding minutes before the heist begins and he only gives the drop-off info minutes before the pickup is complete. If you show up late, it’s done. Sophie tells her that she was the one that said they would never be partners, so she better start out of her business.

Alice wants to erase Kate’s memory from her brain. Enigma tells her that she has to confront Kate and make these visions disappear, then in theory, she can erase them from her memory.

Sophie walks in to see Jacob, he is sitting with agent Tavaroff discussing the False Face operation. Sophie tells him that she had to abandon the whole operation because of Batwoman. Taveroff leaves, Jacob is upset, he says no Black Mask has her informant and she is making this personal, and it is going to get her killed. She says she is doing her job. Jacob notifies her that he is putting Tavaroff in charge of the operation, he is not letting her through herself in front of a bus for Angelique Martin. He shouts at her to get out of his office, twice, she leaves.

Sophie meets with Ryan at a bar and tells her that her lead from got from Angelique didn’t pan out, Jacob sent her home. Her cover was blown by Batwoman, but somehow it is her fault. He tells her that the new guy that is taking the lead, he is going to scorch the earth to take down False Face, and that includes Angelique. Sophie tells her that False Face is planning a new heist the moment he finds a new driver. Ryan wants to go undercover, Sophie tells her it is way too dangerous. Ryan tells her they have to find Angelique before her crows do. They shake hands.

Alice has her eyes closed, she sees a flashing light, Enigma is the one who is flashing it. Alice thinks back to when she was young, in the car with a younger Kate. Kate takes pictures of them, Alice doesn’t want to look at them. Kate tells her she would love herself more if she looked at herself. Alice takes a picture of Kate and she vanishes, then she returns. Alice looks like she is going crazy. Then she is back, in the room with Enigma. Alice tells her that she is begging to think she is toying with her.

Mary loans Ryan her car to go undercover, Sophie tells her that she has to know every single thing about driving, they are going to test her. Ryan says she will do her part, she will study. Sophie says she will wait for the coordinates of a pickup, they will put the payload in her car, and on the way to the drop-off, she will pull over and place the tracking device inside the canister. That will lead them to where they have Angelique.

Without the crows, she had to reach out to someone to help them, but he is trustworthy. Sophie introduces Ryan to Luke and she acts like she doesn’t know him. Luke creates a false identity for Ryan, she is a fast furious driver with a rap sheet ten miles long. Luke sends a message to a known False Face associate and recommends her for the job. Sophie says she is going to gas up the car.

Luke tells Ryan that he knows Angelique is in trouble, but her teaming up with Sophie and all these lies, it is only going to bring trouble. She is going to figure out who she is, she is smart.

Ryan meets with False Face associates, she does a test drive and answers questions. She is given a mask and phone, the first job is that night.

Ryan’s car is packed with the payload in the trunk, she races off. Ryan does the job as instructed and meets up with Ryan afterward, he has the tracker data and Sophie was to meet them, but she is not there. Ryan says, she ditched them for the crows. Ryan says no way, she was too worried they would storm the place and kill Angelique. Ryan thinks Sophie has taken on Falce Face herself.

Alice tells Enigma to go deeper inside her thoughts this time, she wants Ocean gone. Enigma tells her to close her eyes and take a deep breath. She tells to focus on what her senses are telling her, what she hears, and what she feels. Then, we see Alice making out with Ocean in the subway. He asks her if she is going to apologize for killing him for nothing.

Then Alice is in the office with Enigma, Ocean comes in with a gun and says he is alive and very pissed off. Alice tells him she stabbed him and watched him die. Ocean tells her that she used one of Safiya’s knives and she dipped it in desert rose. Alice hits Ocean with a cane which was in the office. But the two end up falling on the floor dazed, Enigma leaves the room.

Sophie knocks out one of False Face’s associates and all of a sudden, she is knocked out by Black Face. Sophie is tied up, Black Face in front of her and he knows she came alone. Batwoman arrives just in time to save Sophie. Batwoman fights against Black Mask and wins, but then he shows her Angelique behind a screen with a gun to her head.

Alice and Ocean are walking down an alley, he tells her that there is one plant left. He says he has made his feelings clear for her, he asks her if she regrets stabbing him. She says she had a shrink tell her today she is a monster. He wants to know if she regretted it. She pushes him against a wall and kisses him.

Tavaroff watches the scene of Batwoman fighting against Blackface, he is on-site and sees some blood on the floor, he takes a sample. Meanwhile, Sophie listens to Luke and Ryan talking when Ryan says she misses her bat suit. Sophie knows she is Batwoman.