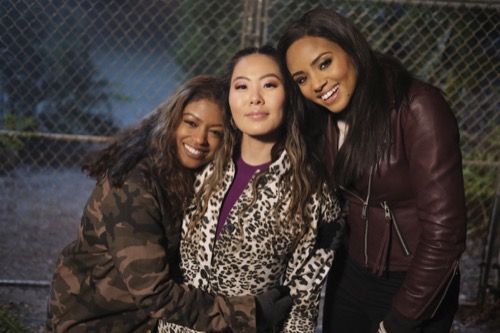 Tonight on the CW the series Batwoman airs with an all-new Sunday, May 9, 2021, season 2 episode 13 and we have your Batwoman recap below. In tonight’s episode called, “I’ll Give You a Clue” as per the CW synopsis, “When Sophie must face a foe from her rookie days with The Crows, Ryan, Mary and Luke are also pulled into the villain’s game.

The tables turn on Alice when she finds herself in dire circumstances; Jacob continues to revisit the past.”

In tonight’s Batwoman episode, an evil man, Brown, has escaped prison after tricking the correction officer who opened his cell door. Meanwhile, Batwoman is busy taking down a slew of men as she looks for Black Mask. The police arrive. After she lectures them on being morons, she disappears before they can shoot.

The Black Mask is trying to torture Beth for Batwoman’s whereabouts. Ryan realizes her roommate is hanging with Sophie. They are drinking. She joins in but it isn’t long before they realize the bottle of tequila they are drinking is from the Cluemaster and comes with a funky caterpillar and a riddle about a missing girl. They realize that Cluemaster is Brown and he has escaped prison. They cannot call the police.

Beth calls her father for help but he tells her she has the wrong number. She begs him for help. Meanwhile, the ladies go on the hunt for the missing female. They jump a fence and enter into what looks like a shooting range. Lights go on, showing Brown’s daughter in a glass box. She screams for help. They get close and talk to her. They think he may have poisoned her. Their only option is to shoot at the box. They realize before they can do that they need to solve another riddle. They manage to get her out of the box.

Beth is still being tortured and isn’t willing to give up the information on Batwoman. She talks most of her way through it. She learns who one of Black Mask’s associates is.

The ladies learn Brown’s daughter wouldn’t join in on his illegal crime spree of killing and more and this is why he did this to her. She has been solving his clues for years and this annoys him. In order to stop him. The ladies and the daughter, Stephanie, along with one of their very smart friends tries to figure out what the Cluemasster met by finishing what he started.

They head to Brown’s old game show TV set where he began as the Cluemaster before turning evil. He has the set rigged. If they cannot answer some of his questions they will be blown up. Meanwhile, Stephanie and the ladies’ friend stay behind to do some of their own research. The ladies make it through the Cluemaster’s quiz bowl. But they are running out of time. They ask Mary to call Batwoman. Meanwhile, Beth is still being tormented for a name. She brokers a deal to help fix Black Mask’s daughter’s burned face.

The ladies decide they need to deal with this after they cannot get in touch with Batwoman. Sophie calls out Ryan. She knows she is Batwoman. Ryan admits her identity. Sophie heads to get her baton. Ryan and Mary argue about her identity after Sophie leaves.

Stephanie runs into her father and confesses she put him in prison 5 years ago, not Sophie. He takes her hostage. He tells her he is going to kill them both. The ladies’ friend saves her, breaking the car window before she can die.

Sophie returns to help Ryan and Mary. Brown is taken away by the police. Stephanie worries she will be like her dad. Meanwhile, Mary calls her own dad. She hasn’t seen him in days. Just then, he is rushed into her. Several homeless men found him with a snake bite injector in his leg.

Sophie and Ryan meet up. Sophie swears she will not out her. Ryan smiles. Meanwhile, Beth has created a mask for the Black Mask’s daughter. When she places the mask on her, she realizes she is Kate!