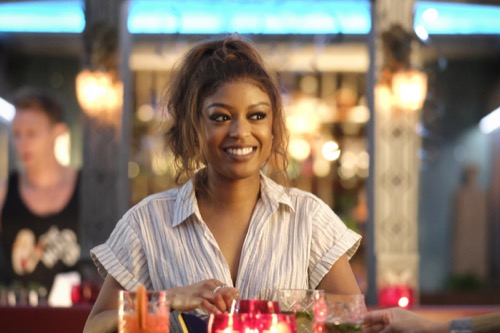 Tonight on the CW the series Batwoman airs with an all-new Sunday, May 16, 2021, season 2 episode 14 and we have your Batwoman recap below. In tonight’s episode called, “Justice for All” as per the CW synopsis, “Batwoman (Javicia Leslie) is faced with a new challenge when Gotham’s Snakebite addicts become ravenous for more than the next fix.”

In tonight’s Batwoman episode, Beth doesn’t want to leave Circe who she thinks is Kate, her sister. Circe denies knowing who Kate is. The Black Mask tells Beth to leave. She finally does.

Out fighting crime, Batwoman chases a man into a church in an effort to help him after she attacks his attacker. Batwoman comes across a woman eating the flesh of another. It makes the news the next day.

Ryan is tending bar the next day at a fundraiser. She lies to Imani about what she did the night before. Meanwhile, a man stops in an alleyway in his car to inject something called snakebite into his veins. His eyes go red.

The police show up at the fundraiser. They want to shut it down. Ryan gets mad, getting her and Luke arrested. Sophie shows up wondering what happened. It isn’t long before she ends up in the same cell with Ryan and Luke.

The man in the alley is anxious and paranoid. A cop shows up and tries to help him when he is attacked by two others who appear to be on drugs.

Beth speaks with Dr. Rhyme who she has tied up. She vents about Circe who is really Kate. The doctor tells her that her sister underwent hypnosis. The doctor offers to help as she is scared.

Mary confronts her dad about the marks on his arm when the man from the alley comes in begging for help. He identifies himself as Richard. Meanwhile, Beth heads to find a pair of keys she has been hiding. Ocean appears. He wants to know where she has been. She shares that Kate is alive.

Mary goes over the labs for Richard with her dad. They have him tied to a bed for safety. He admits he does snakebite to talk to his dead wife.

Sophie and Ryan discuss being policed by people that do not look like them and how to change this.

In their cell, Ryan and the others learn that Gotham has been overtaken by zombies. They are looking for the Batwoman’s help. It isn’t long before Imani gets them out. Ryan runs to aid the city.

Sophie calls for the crew to help deal with the zombie outbreak while Luke tells Ryan she needs to individually inject victims with the anecdote. She doesn’t know how she can do this and it will be dangerous.

Beth unties the doctor and begs to know if she can fix her. The doctor tells her it will be tough but she will try. She needs a password though and before Beth can get it the doctor is dead.

Batwoman enters a church to try and save the people of Gotham. She is attacked several times until she makes it to a safer place. Just then, Tavaroff comes in with his men and shoots dozens to death. Batwoman hides.

Mary calls out her dad. She knows he was using snakebite to see Kate and Beth. Just then, Richard gets free.

After the city is safe and calm, Sophie tells Ryan and Luke she is leaving the Crows. They understand. Meanwhile, Beth is angry at Ocean for killing the doctor. He doesn’t want her to save Kate. She always chose everyone else and not her twin. That isn’t loving and she doesn’t need that. She is protecting her.

Ryan and Imani finally spend some time together. Ryan admits she doesn’t have time for a serious relationship but Imani deserves the best. Meanwhile, Luke spots the man he shared a cell with jacking a car on the street. He tries to stop him. Tavaroff shows and the guy blames Luke. When Luke tries to grab for his phone, Tavaroff shoots him.