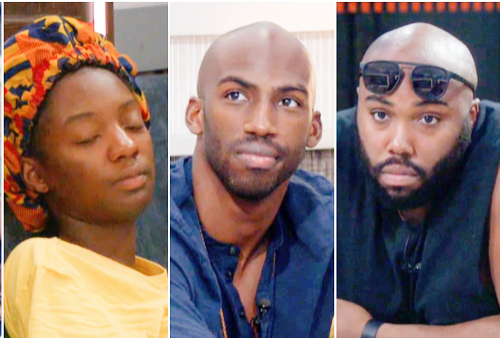 The episode begins with Julie welcoming viewers to the season finale of Big Brother. After 85 days, Xander, Big D., and Azah had each other’s back in the Cookout alliance, but tonight, they are all playing their individual game.

It’s time for Azah and Big D. to face off in the second part of the final HOH of the season, the winner will face off against Xavier in part three for a chance to become the final HOH. Today they are playing Big Brother’s Four Of A Kind slot machine. On go, they will receive their first jackpot question, the answer is always four specific house guests. To answer, they race up to the top of the slot machine and spin each wheel until they align to answer the question. The houseguest who can correctly answer three questions the fastest win. Azah doesn’t feel confident in her answers, even when she had them correct, she feels she took too long to line them up. Derek F. is slow too, he is also in pain trying to line up the answers being on his knees, he says it was the hardest competition this summer.

Time to see who won, Azah finished with a time of 13:19, Big D. finished with 20:22. Azah wins the second part of the final HOH and will be facing off against Xander in part three. Big D. doesn’t know how he feels about this whole Xander and Azah cuddling all the time, he has been carrying Azah this whole game and says she owes him. Up until this point, Azah and Big D. have been ride or die, but in the last week, she has felt disrespected because he said that he carried her in this game. The two get into an argument, the ride or die is definitely gone. She always thought they would be a final two, but he made it clear that he doesn’t respect her gameplay and now she is considering, if she wins, to take Xander to the final two. Big D. tells Xander he is tired of Azah’s shenanigans, he made deal with Xander and he plans on keeping it.

Azah tells Xander that if she wins she will take him to the final two. Xander has been quiet, the more Big D. talks the better it is for Xander and he is thrilled. Big D. and Azah sit down together, she says that if she won, she will take Xander. He says he kept her here because he thought she would pick him, and he made the wrong choice. Big D. can’t believe he is hearing this from Azah, he feels like he carried her all the way through the game.

The jury, Britini, Derek X., Sarah Beth, Claire, Alyssa, Tiffany, and Hannah meet and talk about who they think will be the next juror. Tiffany says she would like to see Big D., but it wouldn’t surprise her if Azah walked in. Claire thinks they would be smart to send Xavier out because he is playing a good game. All of a sudden, Kyland walks out. He tells them that Big D. cast the vote to send him out of the game. Everyone seems like all the jurors think Xander had the best game. Their positives for Azah are her loyalty and she was honest in her gameplay. Sarah Beth doesn’t think Azah did anything great, but if she takes out Xander, then that will be commendable. Alyssa says Big D.’s social game was very strong.

It is time for the final and third round of the HOH competition, Xander and Azah are the only two who are eligible to compete. This competition is called Houseguest Headliners and to win they will have to prove just how well they know their former houseguests who sit on the jury. They are about to watch short BB beach entertainment promotional videos. These will feature a specific member of the jury, each video will make three statements about that specific juror and their job is to figure out which statement is false, A, , or C. The houseguest with the most points after eight videos will become the final HOH for this season. With a perfect score of eight, Xander wins and has decided which house guest he is taking to the final two.

It is time for Xander to cast his vote to evict. Big D. calls him his brother and says they have the black ops together and he hopes they ride it out to the end together. Azah tells him that he respects his game and will accept any decision he makes. Julie tells Xander that he is guaranteed either first or second place and has to decide who will sit next to him when the jury makes their decision. It could be the difference between 75 thousand and 750 thousand dollars. Xavier says he loves them both and is internally grateful for everything. Then he tells Big D. that he walked in the house with him and it is only fitting that they walk out together. Azah is evicted from the Big Brother house. Big D. hugs Xavier and starts crying.

Julie tells the jury that the final houseguest was evicted. Tiffany thinks it is Big D., Sarah Beth hopes it is Big D. Azah walks out and the jury is shocked. Julie announces that Xavier was the last HOH of the season and he choose to take Big D. to the final two with him.

Julie tells Xavier and Big D. that the jury has questions for them. Kyland asks Xavier what does he think are the most important factors they should consider in crowing the first black winner. He says he played a strong game, he lied, played, and manipulated, but he never disrespected them. Britini says some of the plays he did on his own. Big D. says he started the Cookout and he came with actual facts to evict people to protect the Cookout. Alyssa asks Xavier about his biggest mistake in the game. He says probably getting too close with everyone, it hurt to see them go, it crushed them. He doesn’t regret it, but it made the game harder. Hannah asks Big D. was he there for fame more than game. Big D. says yes he wanted to be on TV, but he was also going for the money, he entertained them and sent them home one by one. Derek X. asks which two strategic moves Xavier made that they are not aware of. He says in the final four he blindsided Kyland, in week 5 he threw the HOH competition. The two strongest players were Derek X. and Kyland. Sarah Beth asks Big D. other than starting fights, what did he do to get his alliance to the final six. He says any time there was an HOH, he got in their ear to save the Cookout at all times. Azah asks Big D. why does he think he deserves the money more than Xander. He says he put in the work, he gave it his all, he never threw a competition. He even made himself a pawn if needed be to protect them, he has a heart and is there for everyone.

Big D. goes first to speak to the jury. He says he started the Cookout alliance, he has worked really hard and never gave up, he appreciates their love and Xander deserves the win as much as he does.

It is time to vote. Then, the five houseguests who left first are live from video in their homes. Brent says he had no idea that Tiffany had so much impact on the game, he gives her all credit, he didn’t see it coming at all. Derek X. says he didn’t know he was a pawn, he was love-struck and wasn’t focusing. Julie says there were some secrets this season that were hidden this year. Hannah is a master’s student studying to be a doctor, Sarah Beth is a forensic chemist, Claire is an artificial intelligence engineer, Britini is a fourth-degree black belt. Big D. also has a secret, he is the last son of the heavyweight champion of the world, Smokin’ Joe Fraser.

Xavier then reveals that he is a lawyer, and Britini wants the floor to tell everyone something. When she was 22 months old, she was diagnosed with autism. She has been living with autism every day and she wanted to be known for her, not her autism so she hasn’t told anyone. She thanks everyone for accepting her for her.

Julie brings up Kyland’s exit, it was tense. She asks him if he regrets making it personal. Kyland says it wasn’t an insult to Xavier and his game. Xavier says his nephew shouldn’t have been brought up, he wasn’t in the game. Hannah says she is so proud of making history with the first black winner of Big Brother. Julie tells everyone that they have doubled the prize money for America’s favorite player.

It is the moment of truth, Britini for Xavier, Derek X. for Xavier, Sarah Beth to Xavier, Claire to Xavier, Alyssa to Xavier, Xavier wins Big Brother. Just for the record, Xavier got all nine votes.

America has been voting for their favorite player, the top two vote-getters were Derek X, and Tiffany, America’s favorite houseguest is Tiffany.

Julie announces that in February 2022 she will be back for the celebrity edition of Big Brother.