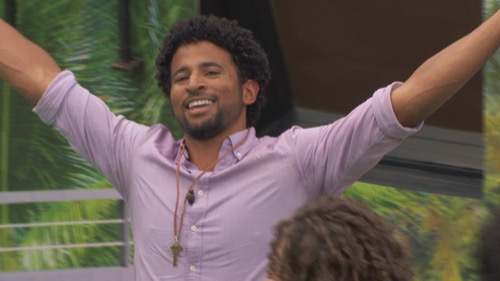 Tonight on CBS Big Brother 23 airs with an all-new Wednesday, July 18, 2021, episode and we have your Big Brother 23 recap below! On tonight’s Big Brother season 23 episode 5 “Wildcard and Nominations,” as per the CBS synopsis, “Tonight on Big Brother there will be another Wildcard competition held.  Kyland will announce the two houseguests he is putting up on the block.”

In tonight’s Big Brother episode, the episode begins with Kyland, he is the new HOH. Alyssa is feeling amazing that she is still there, she is thrilled that Travis was sent home, but she still needs to find out who the two votes were against her. Derek F. voted for Alyssa to go home, but he did it as a joke to stir up the house.

Christian is not mad that the two rogues happened, he is just upset that he didn’t know about them. Claire is thrilled that Travis is gone and she and Tiffany are both safe. Meanwhile, Kyland thinks that Tiddany was one of the rogue votes and he is right. Xavier is happy that Kyland is HOH because he is pretty tight with him.

Frenchie says he knows who the two people are who are the rogue votes, Tiffany tells him that he shouldn’t even be talking about them, he should just be quiet about it altogether. Tiffany goes to Kyland, she tells him that she loves him to death and he should be careful with Frenchie. Tiffany wants him to be careful, even though Frenchie is loyal to her, she doesn’t want this HOH to turn into a Frenchie HOH 2. This is the second time that someone has come to Kyland and warned him about Frenchie, Travis gave him an earful before he left.

Kyland invites everyone up to see his HOH room. Kyland gets a letter from his mom, Tiffany reads it for him. The letter is heartfelt, Kyland gives Tiffany a big hug after she reads it.

Tiffany tells Azah that she wants Frenchie on the block, he creates chaos in the house. Azah has a hard time with this because she is still a part of the Jokers with Frenchie.

It’s time for the Wildcard competition, the Queens are safe, so they are not competing. Hannah and Christian have already participated, so they won’t be playing. The winner of the Wildcard competition can win safety for the week. Jokers, Aces, and Kings have fifteen minutes who decided who they are sending. Frenchie wants to play, he feels like he could be put on the block. Sarah Beth would like to play, she wants to have control of the game. Jokers end up choosing Frenchie, Kings choose Sarah Beth, and Aces leave it up to faith. The draw is held for Aces, Brent will be playing. Frenchie, Sarah Beth, and Brent are participating.

Frenchie goes to see Kyland and tells him that he is his ride or die. But, something is off and Frenchie feels it. Red flags are flying everywhere for Frenchie. Meanwhile, Brent tells the house that Frenchie is a loose cannon and unpredictable. Whitney tries to speak to Frenchie to calm him down but all he says is that there are snakes in the grass and a lawnmower is needed. Frenchie goes to Brent and tells him that if he doesn’t win, he is 100% going home. Brent thinks Frenchie wants him to through the competition but he won’t do it.

Time for the Wildcard competition, they are one by one in the BB art gallery. Every round they will see a breathtaking piece of art in the art gallery. They will then be asked a question about the colors in the artwork. When they have an answer, they have to place the appropriate color swatch in the stand on their podium. Only the fastest correct answer will earn a point. The person to win three points will win the competition. Frenchie knows that if he doesn’t win this competition he is going home. Sarah Beth wants to win to show her alliance that she is a strong competitor.

Tiffany goes to speak to Kyland and basically tells him that Frenchie is a snake who is going to bite their heads off. Kyland goes and speaks to other people and the rest pretty much say the same thing.

Time for the nomination ceremony. The first nominee is Frenchie, the second nominee is Britini. Frenchie says he never quit anything yet and he never will. Britini doesn’t think she should have been put up just because she is on the same team with Frenchie. Frenchie had Brent’s trust, but that is all gone.