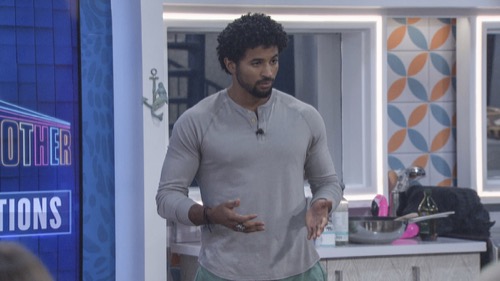 In tonight’s Big Brother episode, the episode begins with the end of the nomination ceremony where Frenchie and Britni were nominated for eviction. Kyland is not happy about the nominations but this is best for his game. Britini returns to her room and she is hysterical, Azah thinks Britini is a scapegoat.

Derek F. is upset to have two of his team mates on the block, Kyland should have told him in advance because they are working together. Frenchie tells Britini to let the focus be on him, let him go him. Britini says she doesn’t want to go home, Frenchie promises that if he wins the Veto that he is going to take her off the block.

Meanwhile, the other houseguests think Kyland’s move was a smart one. Kyland says he feels peace. Tiffany thinks that the Queens did well by putting Frenchie on the block. Whitney thought she trusted Frenchie, but he called her out in front of everyone and now she is happy that he is on the block.

Kyland goes to see Britini and tells her that Frenchie is the target. She asks him if he wins would he use the Veto, he says no it wouldn’t be in his best interest. Britini tells him that all she is going to do is focus on the Veto.

Frenchie is with Derek F., he tells him that every year the jocks make it in the game and he got one out and all he wanted to do is get the rest out. Britini tells Frenchie that everyone in the house is saying they are going to send him home.

Frenchie goes around the house and tells everyone about the alliance called the Slaughterhouse but he doesn’t mention that Derek F. and Xavier are in it. Tiffany doesn’t buy it, Claire is thinking the alliance is fake. If anything, Frenchie created doubt in the house. Kyland says Frenchie is becoming too much of a liability to his game and got to go home.

Alyssa is definitely down to talking with Kyland about the game, she tells him that whatever he wants to do, her team is on his side.

Time to pick the Veto players. Kyland picks first, he gets Alyssa, Frenchie gets Claire and Britini gets Derek X.

The Veto competition begins and it’s called Fun Tan Lotion, to win they have to fill a container with suntan oil so they can retrieve their whistle in the shortest amount of time. It is the contestants’ job to collect as much suntan oil as they can by catching it in their bucket and filling their container. The Times are Claire 5:33, Kyland 4:54, Britini 5:08, Derek X. 4:42, Alyssa 6:57, and Frenchie 5:06. Derek X. won the POV.

Frenchie has totally given up, he tells Azah and says it is eating him up inside. She tries to tell him not to give up. Azah doesn’t believe in giving up and neither does Derek F. and he tells Frenchie not to roll over and take it, get out there and start swinging. Frenchie goes to see Kyland and Derek X., he asks for a chance and says right now he has zero chance.

Frenchie tries hard to give his loyalty to the two of them. Derek X. thinks it is a good idea, the three of them against the world. Time for the Veto meeting. In the end, Derek X., decides not to use the POV – Frenchie’s last chance blows up in his face. Kyland is thrilled that the nominations are locked and thinks Britini should not worry about going home, Frenchie is leaving.