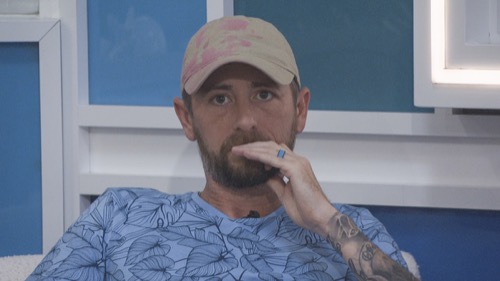 Tonight on CBS Big Brother 23 airs with an all-new Wednesday, July 22, 2021, episode and we have your Big Brother 23 recap below! On tonight’s Big Brother season 23 episode 7 “Live Eviction and HoH,” as per the CBS synopsis, “Tonight on Big Brother either Britini or Frenchie will be sent home.  Following the live eviction, we will have another HoH competition.”

In tonight’s Big Brother episode, the episode begins with the end of the nomination ceremony. Britini plans on just laying low and not getting in the way so people don’t change their minds about sending Frenchie home. Frenchie tells Derek F., that he doesn’t want to go out the enemy, it would hurt his feelings.

At this point, everyone thinks Frenchie is giving up, but he is just playing possum. Whitney and Britini exercise together and Britini drops some rap. Britini is hiding her karate skills from the house, but she is not hiding her rhyming skills.

Frenchie thinks that keeping him in the house is good for a lot of people’s game. One by one, Frenchie does the rounds to try and convince the house for him to stay. Frenchie says if Dan can come back from the dead, then he can cause a ripple effect and stay in the house. Sarah Beth lies down on the bed with Kyland and opens up to him about her dad, the two are getting really close.

Kyland meets with some of the other teams to see where they stand, and the only one that would guarantee him safety is Derek X. Next Kyland meets with the Kings, and he gets a promise from them.

Frenchie sits down with Julie, she tells him that he is a super fan and came out strong. He agrees he came in strong, and he came in with a purpose. He made it a point to give the first week ever thing he had and doesn’t regret that. She asks him if he regrets taking her up on the offer the first night for double or nothing, if he did, he would be safe right now. He says he doesn’t regret it. Julie plays some goodbye messages. Derek F. is emotional and says he is going to win the game for him. Britini says he knows who she is gunning for and she is doing it for him.

Time for the HOH competition. As an outgoing HOH, Kyland is not eligible to play. This competition is called “Tom Talks BB” and here is how it works. Recently, legendary comedian and celebrity Big Brother houseguest Tom Green took to the streets of Canada to talk all things Big Brother. Julie is going to show two videos of Tom and they have to pay close attention, after the first video, she is going to ask various questions about what they just saw.

Get the answer right they stay in the game, get the answer wrong and they are immediately eliminated. Then they will watch the second video and answer another series of questions. The last houseguest standing after seven questions will be crowned the new HOH. Xavier wins the HOH and his whole team the Kings is safe. But, the Wild Card is still in play.