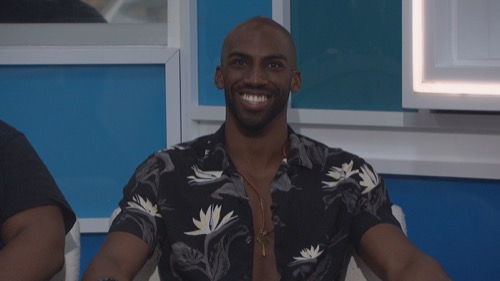 Tonight on CBS Big Brother 23 airs with an all-new Sunday, July 25, 2021, episode and we have your Big Brother 23 recap below! On tonight’s Big Brother season 23 episode 8 “Wildcard and Nominations,” as per the CBS synopsis, “Tonight on Big Brother it is the Wildcard competition.  After the competition, we will see who Xavier puts up on the block.”

The episode begins on Day 16 and Xavier feels great, he is happy to be HOH and he hopes the right person wins the Wild Card so his HOH doesn’t get blown up. Britini is thrilled to be safe, she says it was the longest seven days of her life being on the block.

Brent is happy with his relationship with Xavier, he thinks he has no fear this week. Derek F. has to re-strategize his game with Frenchie going home. Sarah Beth is safe and she is happy that the Queens and Kings have partnered up, they are calling themselves the Royal Flush which includes the Kings, The Queens, and the ace up their sleeve, Derek S. Azah feels safe with Xavier being the HOH but she is worried for Britini.

Hannah has a hard time listening to Brent, she finds him egotistical and annoying and she believes everyone else in the house is thinking the same thing. Hannah says he thinks he is a God that every woman wants. Whitney says he is so in love with himself that he can’t see how annoying he is. At this point in time, everyone in the house wants Brent out of the house.

Tiffany would love to see Xavier go after Brent and Whitney, but more so Brent. Xavier has great relationships with Britini and Whitney, but unfortunately, neither of them are in his alliances so he will do what he has to do.

Hannah has a little crush on Derek X., the two have the same sense of humor, and they are around the same age. Derek X. is not sure where Hannah’s head is at, but he thinks she is cute.

Coming into the house Christian told himself not to have a showmance, but he knows that rumors are going to start because he cuddles with Alyssa a lot.

The target is on Brent, which is perfectly fine for Hannah. Derek X. wants to play the Wild Card competition so he can throw it and there is no way that Brent can stay in the house.

It’s time for the Wild Card competition. Since the Kings are safe, nobody from their team can compete. Hannah, Kyland, and Brent cannot compete because they have previously completed. Aces, Queens, and Jokers have to decide who they would like to play for the Wild Card.

Wild Card players, Aces: Derek X., Queens: Tiffany and Jokers: Britini. This is a really tricky competition. Derek X. doesn’t want to win and keep Brent in the house, but he also doesn’t want Britini to win because she will be able to take herself off as a possible nomination. The only solution is to make sure Tiffany wins.

The Wild Card competition consists of cards and a balance beam. The contestants will be playing Unlucky 13, the goal of the game is to eliminate their opponents. By placing cards that total 13 on their cardholder. Tiffany and Derek X.’s strategy works, Britini is quickly eliminated.

Tiffany knocks out Derek X., she wins as planned. Things could not have gone better, they had a plan and they executed it. Tiffany chooses to decline the safety, this way Brent can go home. Brent thinks that Tiffany not using the safety is the best-case scenario because he believes he is safe in his alliance with Xavier.

Britini finds out that Tiffany and Derek X. were gunning for her and she starts to cry because she realizes that she never had a chance and now lost her opportunity to compete in the Wild Card competition. Meanwhile, Xavier is pulling towards putting up Whitney alongside Brent, not Britini. After some thought though, Xavier doesn’t think it would be good to put up Whitney because it wouldn’t be good for his game.

Xavier goes to speak to Brent and tells him that he wants to put him up as a pawn, it will put just enough doubt in his brain. Brent says no way, if he is put up their relationship won’t be the same going forward. Brent believes it is going to do a lot more damage than good.

Time for the Nomination Ceremony. The first nomination is Brent, the second is Britini who starts crying.