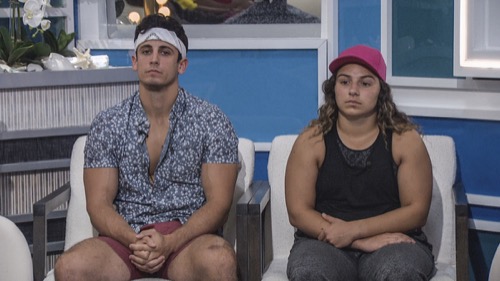 Tonight on CBS Big Brother 23 airs with an all-new Thursday, July 29, 2021, episode and we have your Big Brother 23 recap below! On tonight’s Big Brother season 23 episode 10 “Live Eviction and HoH,” as per the CBS synopsis, “Tonight on Big Brother it is another elimination night and either Brent or Britini will be going home.  Following tonight’s elimination, there will be another HoH competition contest and a new HoH will be named.”

In tonight’s Big Brother episode, tonight’s episode begins with Julie Chen reminding us that it is day 23 in the house and everyone is pulling the wool over Brent’s eyes convincing him that he is safe. Creating a blindside is easy, pulling it off is a whole other matter. Right now Brent thinks the votes are going to be six to five in his favor. This week Brent created the Mafia alliance, everyone knows it is fake except for Brent.

Hannah makes a big mistake while speaking to Derek X. and saying she can’t wait for Brent to go home, Brent walks right near her – but lucky for the house, he didn’t hear.

Everyone is feeling bad for Brent, he is the only one that doesn’t know he is going home and everybody is walking on eggshells around him.

Whitney sits down with Brent and tries to give him some life advice, but Brent just can’t listen to good advice.

Alyssa would like to win HOH so she can put Whitney because she feels like she is a big target. This move worries Derek X. because the Aces will be then down to two and he is not sure if that is the best thing for his game.

Tiffany is in the Royal Flush with the Kings but she doesn’t think it is good to keep a duo in the group. Tiffany asks Derek X. his thoughts.

The Kings are talking and Xavier tells them that they should try for HOH. Hannah’s name comes up and Xavier is worried because she is a part of the Cookout alliance.

Brent admits to Julie that it was the right play for them to make him go home, he is not shocked at all, it is a game of betrayal and he had a target on his back from the beginning on day one. Apparently, Brent had a lot cooking in his brain and she says they are lucky they got rid of him.

It’s time for the HOH competition, it is called Pier Pressure. For this HoH competition, they will be playing with their teams. On Julie’s go, they will race to complete their surfboard puzzle but they must do it, one team member, at a time. And, they are on the clock, a twenty-five-second clock to be exact.

After each turn, they must hit the button to reset the clock for their next housemate. If their clock expires on any turn, they and their entire team will be eliminated from the competition. The winner will be the houseguest on the winning team who puts the final puzzle piece in place and hits their buzzer. It doesn’t take long for Christian and the Kings to win. Surprising that the house doesn’t realize how strong a player Christian is yet!