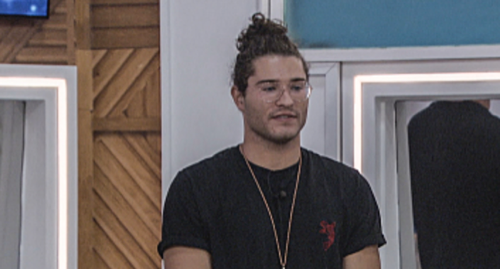 In tonight’s Big Brother episode, the episode begins with Christian winning the HOH, he is so happy to be on the Kings team, he calls them a powerhouse because they have four members left. Xavier as outgoing HOH was watching the competition and he says all teams were neck in neck, but Kings brought it home for him. Aside from Brent’s name being brought up last week, there was Whitney and Hannah, so between those two options, Xavier would like for Whitney to be a target. Britini is safe and she couldn’t be happier, she is so excited. The Kings meet in the pantry room, they jump up and down and celebrate.

Meanwhile, the Jokers are not happy that they didn’t win and Derek F. thinks they are going to be a target this week. Azah tells him not to beat himself up about it. Claire is thrilled that Christian is in her alliance with the Royal Flush, but she is worried that if the wrong people get the Wild Card that she could touch the block as a pawn. Hannah feels ok with Christian being the HOH but she is worried that she could go up as a pawn capacity, so she feels like she needs to nudge him in a different direction, away from her. Whitney is worried because she has no idea who Christian could nominate. Derek F. tells Whitney if he is put up he is going to flip.

The Kings gather again together Christian says he doesn’t know what he is going to do. Alyssa says they have to stick to the plan, put up Whitney and Hannah, everyone has said they want Whitney out. Christian says personally he would rather get rid of Whitney. But Alyssa thinks Hannah is really smart and they underestimate her. Sarah Beth would rather Hannah go up first, she thinks she has a better game and is a bigger threat. Xavier is in a tricky situation, Hannah is in the Cookout alliance with him. Though if Christian put up one of the Jokers, he would have no blood on his hands because he wouldn’t have to put up anyone from the Royal Flush alliance.

Time for the Wildcard competition, the winner not only has safety for the week but it comes with a unique Wildcard decision that will impact the game. Kings, since they are safe nobody from their team will be competing. Claire is the only eligible member of the Queens and will be competing this week. Whitney is the only one from the Aces. Jokers must decide between Derek F. and Azah, they choose Azah.

This competition is in Club BB, and they have to guide a ball that looks like an olive, down a track that looks like a martini glass. The first person to get their olive inside the toothpick area at the top of the martini glass wins. And, during the competition the lights will intermittently go out, they have to be careful. Azah is laser-focused, but her ball is moving really slow. The good thing about her strategy is that the lights going out doesn’t affect her. Whitney is increasingly frustrated. Claire is doing their best, she has already had the olive at the very end, but then she loses momentum. Claire wins! Azah says it sucks that she didn’t win, but she hopes the Aces are the target and not the Jokers.

Claire is congratulated for her win and told she is told that she has to choose safety for her and her entire team for one week. Or, choose to keep herself and only herself safe until jury. Choosing only herself will guarantee her a place on this season’s jury. Claire chooses to take safety just for herself. Claire loves her team but she knows the smartest decision is to save herself. Tiffany tells Claire that she needed that and deserved it. Tiffany is genuinely happy for Claire.

Christian congratulates Claire and tells her anyone would have picked that. Christian is with his Royal Flush members, Claire says Whitney and Hannah make a lot of sense to put up, or one of them with one Joker. Sarah Beth tells everyone that Hannah is a much bigger threat and should be targeted. Tiffany says that Britini is a larger target, everyone feels bad that she was up two weeks in a row, but if she gets HOH she is putting up Britini. Xavier is having a hard time, he needs to keep Hannah safe, but he can’t make it known. Tiffany says she is not fighting for Hannah, she would just put up Britini instead, she feels that for their game as a whole, Britini is a bigger target. Christian doesn’t know what to do. Tiffany wishes him luck and tells him to do whatever he wants to do.

Christian meets with the Jokers and tells him that he wants to have their backs, but he needs to have the reassurance that they would have their backs next week. Derek F. tells him that Whitney said she would put the Kings on the block. Britini tells Christian that this is his opportunity to go forward in the game. Alyssa says nobody is going after Hannah, they all want Whitney out and Christian shouldn’t do their dirty work for them.

Christian decides to have a one on one with Hannah, he tells her that the house is coming after Whitney, and he can’t put up Derek X. because he would go home. She asks him if he is going to put her up as a pawn, he says he can’t say that right now. She says she is not going to get in the way of putting up Whitney, but he should put a Joker alongside her. She says that he is not going up if she wins next week, and she is not sure if the others can offer that. Christian knows that Hannah is smart and extremely convincing, he needs to think about if she is the right person to put on the block.

Time for the Nomination Ceremony. Christian decides to nominate Whitney and Hannah. He says his decision is based on purely what is best for the Kings.