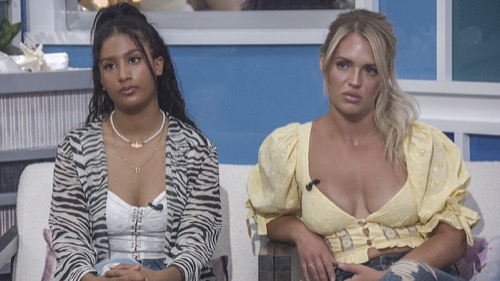 In tonight’s Big Brother episode, the episode begins with Julie Chen saying that last week a plot to take down the Kings was foiled when Christian rose to power making the Kings the only team to be safe. Thirty days in and Big Brother is kicking it into high gear. Christian is thrilled that none of his nominees are going to be changed and he hopes the house continues with Whitney being the target. Although, Hannah is worried that people are going to realize how smart she is.

Sarah Beth doesn’t want a big target on her back, so she is going to keep quiet about her thoughts about voting out Hannah because she is a bigger target. Meanwhile, Tiffany really does not like Sarah Beth and thinks she is spying on her when she walks into a room and she is speaking to Hannah. Tiffany’s goal is to have the cookout be the final six, then two of them in the final two. Sarah Beth is the only one that she is uncomfortable with because of her coming after Hannah, but she is going to include her in her plan for now because she is close to Kyland. Azah likes the plan, it still gives them room to play their individual games. Tiffany has everyone on board with her plan, now she just needs the Cookout to save Hannah and send Whitney home.

Tiffany walks into the hallway, she says good morning to three people, Kyland, Xavier, and Sarah Beth and nobody answers her, she is miffed. Kyland apologizes to her and tells her that it wasn’t the intention. Tiffany says it was off-putting and annoying. Tiffany gets further annoyed because Kyland is defending Sarah Beth and she wonders if their connection is going to be problematic in the future.

Azah goes to speak to Tiffany and asks her what she thinks about going after the Kings, Tiffany says it makes sense. Tiffany doesn’t want to target Hannah and Azah has trust issues with Hannah, now Azah knows she can’t tell Tiffany everything. Tiffany is close to Hannah, they have a master plan, she is uncomfortable about what Azah is saying to her.

Alyssa is clearly joined at the hip with Christian and has his ear, so Whitney decides to speak game with her. Whitney tells Alyssa that she wouldn’t be safe if Hannah were HOH. Whitney tells her that Hannah called Christian a puppy dog and doesn’t make the decision herself. Alyssa tells Christian and the news about Hannah doesn’t sit with him well.

Whitney tells Julie that she is a huge advocate for female empowerment and she shouted it out in the house, so she thinks the guys were really scared of her in that way. She thinks they saw her as a bigger threat. Julie tells her about the Royal Flush alliance, she says she is not surprised but everything makes sense now.

Julie calls all the remaining houseguests to the living room. Julie says the Aces lost another teammate, and the Kings are the only team with four members. But none of that matters now, only one person can win Big Brother, from here on out it is every man and woman for themselves. The team twist is officially over and with it, the Wild Card competition. They are all playing on their own and only they can guarantee their safety.

Time for the HOH competition and this one is an endurance competition. The houseguests look like they are standing on the edge of a cruise ship, it is called “Whale Of A Time” and the houseguest are on a whale watching tour, they only have to hold on. The last person standing will be the new HOH.