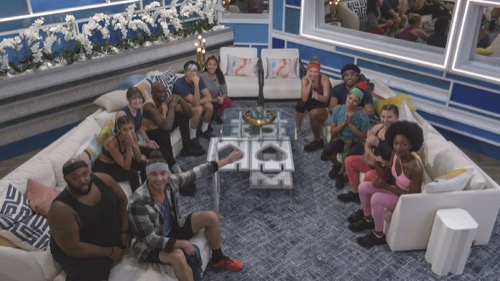 Tonight on CBS Big Brother 23 airs with an all-new Sunday, August 8, 2021, episode and we have your Big Brother 23 recap below! On tonight’s Big Brother season 23 episode 14 “HoH Nominations,” as per the CBS synopsis, “Tonight on Big Brother we will get the results from the endurance HoH competition and following the competition, the new HoH will reveal his nominations>”

In tonight’s Big Brother episode the episode begins with the endurance competition where the houseguests are vying for the HOH win. Christian is stoked because his HOH went as planned, now he wants Alyssa to win so he can sleep in the HOH again this week. Derek F. is the first one eliminated after nine minutes. Tiffany says she will hang on to the wall until her arms fall off, she doesn’t want Alyssa to win.

Claire is safe until the jury, so she jumps off. Sarah Beth is having a hard time and since she believes she is safe, she jumps off while Hannah loses her grip and she falls off. Kyland is also having a hard time and the handles are getting slippery, he falls done – he is bumped, he really wanted to go further and win this. Britini is down after an hour and four minutes, she hopes she is not on the radar this week and doesn’t see the block. Tiffany is super worried that Alyssa could fall, she looks so confident. Azah loses her grip, she is out of the competition.

Tiffany is down, she literally wants to cry at this point. Xavier plans to throw the competition at the right time. Alyssa tells Derek X. that if he drops she won’t put him up, she doesn’t know how much more strength she has. Derek X. won’t jump off so she makes a deal that he won’t put her up, she jumps off. Xavier makes a deal with Derek X. so he makes sure that he is safe this week. The winner of the HOH is Derek X.

Hannah is over the moon so happy that Derek X. won the HOH, her plan is to be in Derek X.’s ear all week. Alyssa would have loved to keep Christian safe as well, but she had to think of herself when she had the opportunity with Derek X.

Sarah Beth was throwing Hannah’s name all around the house last week, so she sits down with her to clear the air and see if they can work together – but she knows she is a smart player and hopes at least that the conversation could tide things over for a few weeks. Xavier let Christian know that he was included in his deal with Derek X. before he dropped. Tiffany flips when she finds out that Derek X. made a deal with Alyssa, she wanted her to go home.

Derek X. is thinking of going after Christian this week who has a 50% win rate in competitions, he needs to get him out because if he doesn’t, he knows that Christian will get rid of him. Tiffany makes a huge mistake and mentions the Royal Flush in front of Hannah when she is speaking to Derek X. Tiffany tells Derek X. to put up Britini as a pawn. Derek X. knows that he has to backdoor Christian because he will win the Veto. Tiffany walks away and Hannah asks Derek X. about the Royal Flush. Derek X. says it was just a one-week thing.

Hannah goes to speak to Tiffany and tells her that she slipped about the Royal Flush, Tiffany feels like an idiot. Tiffany says it is just a cover, it doesn’t matter. Hannah is not stupid, she is going to keep this information in her back pocket and maybe use it later.

Derek X. sits down with Xavier and he wants to let him know that he made a deal for him, not his whole team. Derek X. tells him that he is good, he is not going home. Xavier is confused, his team is a part of the Royal Flush and so is Derek X. so why is he thinking of targeting them. Xavier says he would put up Britini on the block. Next, Derek X. sits with Sarah Beth and she says she would like to see the Royal Flush safe. He asks her if she is willing to go up as a pawn this week.

She says she would really be upset. There is no universe where she comes from where she would be ok with going up as a pawn. Next, Derek X. asks Derek F. if he would be willing to go up as a pawn, he says no so Derek X. continues the rounds, he asks Azah who says no, then he asks Britini who says she doesn’t want to go up on the block. Derek X. wants to make a big move, but he doesn’t know what to do. Hannah wants Derek X. to put Sarah Beth up as a pawn because she is been gunning for her. At this point, Derek X. does with that he did fall off that wall, he has to make one of the biggest moves of his game and he has no idea what he is going to do.

Time for the nomination ceremony, Derek X. nominates Britini and Sarah Beth for eviction with the sole purpose of backdooring Christian, for now. Christian is upset, Derek X. totally blew up the Royal Flush this week and he has no idea what is going on in his head.