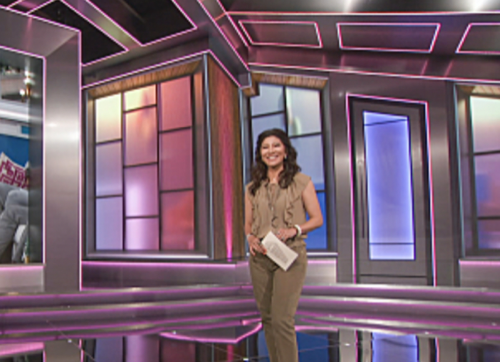 Tonight on CBS Big Brother 23 airs with an all-new Sunday, August 15, 2021, episode and we have your Big Brother 23 recap below! On tonight’s Big Brother season 23 episode 17 “HoH and Nominations,” as per the CBS synopsis, “Tonight on Big Brother it is the completion of The Head Of Household competition, and the new HoH will reveal his nominations.”

In tonight’s Big Brother episode, the episode begins with the HOH competition, the backyard has been transformed and the competition is called Name That Croon. They will hear tunes and have to identify during which competition that tune was played. Alyssa wants to win, with Christian gone, she needs to ensure her safety. Kyland doesn’t want to win, he knows that Sarah Beth is probably the next target, and he doesn’t want to have to nominate her. Claire and Britini are first, Claire is quickly eliminated.

Sarah Beth and Kyland are next, Kyland wins and chooses Britini and Azah to square off against each other. Azah wins, Britini is eliminated. Kyland and Alyssa are next, Kyland is correct and Alyssa is bumped, she is out. Azah and Derek F. are next, Azah wins. Tiffany and Hannah are next, Tiffany wins. Azah and Kyland, Kyland wins and Azah is upset, he didn’t need to win and she told him that she wanted to win. Tiffany is up against Xavier and he buzzes in first but he is wrong.

Xavier says that he threw the competition. The last two are Tiffany and Kyland and she says this is her competition to win. Tiffany is the first to ring in and she is wrong. Kyland is the new HOH, he tried to give it to Tiffany but she picked the wrong answer. Azah says part of her should be happy, but she is livid, she really wanted this HOH, Kyland said that he would throw it to her and he didn’t. Tiffany is crying, she knows that Kyland is not going to nominate Sarah Beth and it is just terrible for her.

Kyland is considering all options for who to nominate. This HOH is definitely going to be much more challenging than his last. Xavier is talking to Tiffany and he thinks it is getting harder and harder to keep the Cookout together. Azah congratulates Kyland, there is an air of awkwardness between them. She asks him why kept on picking her, he says keeping the Cookout hidden is best for all their game. They are talking and have to reset because they both have attitudes. Kyland tells her that he is not her adversary. She says she asked him to throw it and he didn’t. Azah leaves but she feels like she wasn’t being heard by him.

Claire sits down to talk to Kyland, they really have talked much game in the past two weeks so she has no idea who his targets are. She says there are options, joker, and X. She would love for someone who she really doesn’t work with to go home this week. He says he doesn’t know what is best for him but silently, he may have taken her out after she mentioned Cookout members.

Derek F. sits down with Kyland who tells him if there are options that work out for the six then that would be good. Derek F. throws out Alyssa’s name, along with Sarah Beth as a pawn. Kyland asks about Britini or Azah as a pawn, Derek F. says that would be hard. Derek F. offered to put himself up as a pawn to protect Azah and Britini.

Time for the Nomination Ceremony, it is Kyland’s responsibility as the HOH to name two people for eviction. The first houseguest that he has nominated is Claire and the second is Derek F. Kyland says that actions at the HOH competition made him rethink his place in the house. Meaning, Claire said that all her targets were members of the Cookout. Claire can’t believe it, she was nominated by her former teammate and alliance member. Azah is surprised, after her exchange with Kyland, she thought it would be her on the block. Derek F. is not telling Azah and Britini that he went up as a pawn because neither are good at poker faces.

Tiffany tells Claire that she has her vote, losing her this early was not her plan and wouldn’t be good for her game.

The High Rollers Room is now open, Kylan escorts everyone to it. They all of the opportunity to gamble for greatness. They have an opportunity to win a second Veto, take someone off the block, or over through the HOH. The houseguests will have the opportunity to get more BB bucks in the coming weeks, as well, America will be giving them some BB bucks.

Sarah Beth got 50 BB bucks, she decides to use her BB bucks to play in the VETO derby. She plays a shuffleboard game, knocks one off the board, her final score is 4. She doesn’t win.

Kyland calls everyone to the living room to give the results of the VETO derby. Kyland wins, Derek F. is in second place. Claire is in third, Sarah Beth in fourth. Tiffany played in that competition but she is not on the board, so nobody knows she took a shot at it.