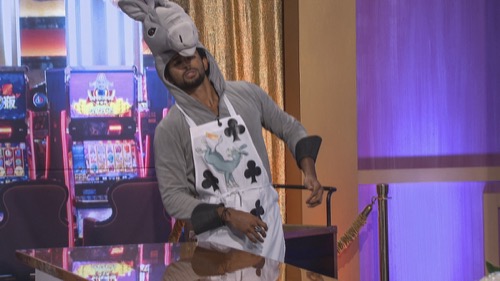 Tonight on CBS Big Brother 23 airs with an all-new Sunday, August 18, 2021, episode and we have your Big Brother 23 recap below! On tonight’s Big Brother season 23 episode 18 “PoV and Ceremony,” as per the CBS synopsis, “Tonight on Big Brother it is another PoV competition and we will see if Kyland’s nomination’s hold..”

In tonight’g Big Brother episode, the episode begins with Veto Derby results; Kyland, Derek F., Claire, and Sarah Beth will play in the derby. Kyland needs to make sure he wins one of these POVs so his nominations stay the same. Even though Derek F. volunteered to go up as a pawn, he wants to make sure he is safe. Britini goes to see Kyland and promises him two weeks of safety if she is safe this week.

Kyland is not targeting any members of the Cookout or Claire, or Sarah Beth because he is working with them. Derek F. still doesn’t know who the target is, he just hopes it is not him. When Kyland first won HOH Azah thought Britini was the target and now Derek F. tells him that he is the target and she is worried, she doesn’t think any of the Jokers are safe. Britini has to win the POV, she want to ensure her team safety.

Tiffany is not ready to lose Sarah Beth, she wants Britini gone instead so she goes to speak to Kyland. She tells Kyland that Claire will listen to her and they should keep her as long as they can. They should get rid of a joker. Kyland now feels confident keeping Claire in the house. His target is Britini or Alyssa, but he has to see how this POV goes before he can lock in his target.

Time to pick players for the POV competition. Kyland picks Alyssa to play for the Veto, Claire picks Azah and Derek F. picks houseguest choice, he chooses Britini. This is the best-case scenario for the Jokers. They are also going to place their bets for the derby. Kyland places his bet, he chooses Alyssa, Derek F. chooses Britini, Claire chooses Kyland, Sarah Beth chooses Azah.

Out in the backyard, it is Otev and he flexes his muscles, the competition is called Otev the Jacked Jellyfish. The players are ready, they are on their knees, they have to slide down and find the answers tokens from the questions that Otev asked them and be the first person to have the right answer and not be the last person up the ramp. Derek F. is the first eliminated.

Tiffany notices that Azah is throwing the competition to Britini and she is not impressed. Azah is eliminated, then Britini. Claire is evicted next and she is really bumped. Kyland has decided that he is going to throw the competition to Alyssa. Claire knows Kyland is throwing it and thinks he looks like a jackass. Alyssa won the competition. Because Alyssa won, Kyland wins a VETO because he voted that she would win. Kyland now says his target is Britini, so he is happy with how everything turned out.

Claire’s punishment is over and she couldn’t be happier, Kyland’s as well. Kyland and Derek F. are talking in the HOH room, Kyland tells him that Britini is going home. Derek F. is trying to stay calm, but in his head, he is screaming and has to get her out of this. Derek F. brings up Derek X., he is a strong competitor and a possibility of a backdoor. Kyland has to make sure he is not letting his emotions cloud his strategic judgment.

Sarah Beth finds out that Britini is the target and she tells her. Britini runs around the house looking for Kyland, she calls him a liar. Britini confronts him and then breaks down, he says he is sorry. Kyland is now wondering if there are other options when he sees Britini in anguish.