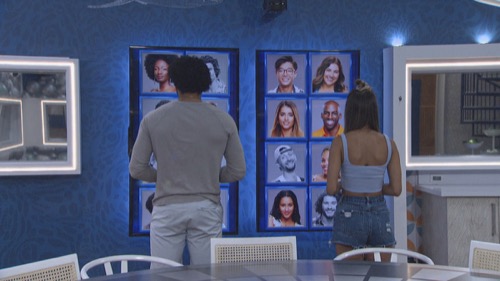 Tonight on CBS Big Brother 23 airs with an all-new Sunday, August 19, 2021, episode and we have your Big Brother 23 recap below! On tonight’s Big Brother season 23 episode 19 “Live Eviction and HoH,” as per the CBS synopsis, “Tonight on Big Brother it is another live eviction.  Of course, the PoV results will be complete tonight and then we will know who is on the block to go.”

In tonight’s Big Brother episode, with emotions running high and two vetoes in play, who will end up on the chopping block? This was the question that the host asked and only Kyland could answer. Kyland was Head of House. He originally set out to put both Britini and Claire on the chopping block and then he talked to Brittany. She convinced him into making a deal that would keep her safe. He agreed to it and so he set his eyes on Claire. Then Tiffany found out. Tiffany was one of Claire’s allies and she didn’t want to lose her. She championed for her friend. She talked Kyland into reversing his decision. He decided to go back to wanting to eliminate Britini but someone told Britini on the sly and now she’s ticked off. She was actually hurt by this decision.

Britini thought she was safe. She truly believed that she talked Kyland into targeting Claire and so truly Tiffany ruined her game. Tiffany and Kyland. They put Britini on the block and they had Big D as the pawn. He was up against Britini but no one truly believed anyone would eliminate him over her and even Britini knew this. Britini burst into tears after the house meeting. She was sick of being picked on. She’s been up four times out of the six and she was tired of it. She didn’t even have the energy to fight. Britini just believed she would be sent home and funnily enough not everyone was set on eliminating her. They were some whispering about Derek F. Big D was the most protected person in the house.

Everyone talked about him being in the finale. This in turn made some jealous because they didn’t want Big D taking a spot that could potentially go to them and so they tried to eliminate him. They spoke to others. Claire was definitely on the side of eliminating him. She tried to talk Tiffany into doing it and Tiffany wasn’t having it at all. Tiffany admitted in her confessional that if Claire didn’t stop coming for someone in the Cookout that she would have to nominate Claire next for elimination. This went the same for Derek X. He too wanted to eliminate his fellow Derek and he talked about it with Claire and Hannah and Tiffany. This meant Tiffany found out about their plan and tried to stop them.

Tiffany told her Cookout alliance about Claire and Derek X. They agreed with her that the two have to be put on the chopping block and so they worked against the two people coming for their alliance. They managed to manipulate Derek X. They made him believe that they needed him around and that he should throw the next HOH. But Derek went to Claire and she told him that those guys were trying to manipulate him. She told him that they wanted him to lower his guard so that they could backdoor him. Derek X. wizened up to what’s going on. He also realized he couldn’t upset anyone with power right now and so he later voted to eliminate Britini and Claire did the same. They didn’t take a shot at Big D when they had the chance.

There was one person who voted to eliminate Big D. Though she was a part of the Cookout alliance, Azah didn’t want her friend Britini to be sent away unanimously. Brtiini was still eliminated. She was sent home. There were some tears and someone said: “you never know, she might come back”. Which is true. She might come back. If she does, she would be put back right on the block and so maybe it’s better for everyone that this is their final goodbye until the finale. Britini didn’t mind leaving. She received some beautiful messages from her friends and so the only one she was angry with was Kyland. Kyland didn’t respect their deal. He broke his word. He put her up for elimination and now Brtini said that others in the house know better than to trust him.

The house later had another challenge for HOH. It was called Dash to Dinner and the house members needed to balance on different beams course in order to get to the buzzer. They only have forty-five seconds to run the whole thing. Claire went first. She accomplished it in the given time and so her time was the one to beat. Alyssa ran the course next. She hit the ground and was eliminated. Big D ran next. He didn’t beat Claire’s time and so she still was the one to beat. S.B ran next and she was fast. She raced through the course and she did it with the fastest time. Azah ran next and she wasn’t as fast as SB and so she too was eliminated. Hannah then had her run. She wasn’t as fast as SB and she was eliminated. Tiffany ran next. She wasn’t fast either and was eliminated.

Derek X. ran the course next. He almost beat SB’s time and lost by a second. Xavier then had his run and he fell and so he had to start over but he wasted too much time by doing that. Sarah Beth became the new Head of Household.

And the voting was now open for anyone who wishes to send BB bucks to the contestants.