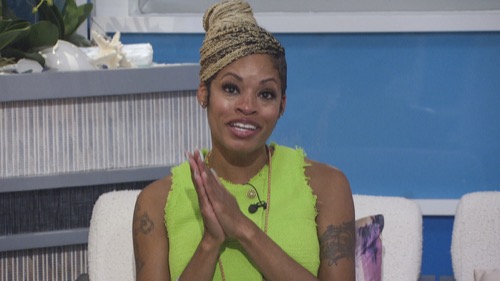 Tonight on CBS Big Brother 23 airs with an all-new Sunday, August 29, 2021, episode and we have your Big Brother 23 recap below! On tonight’s Big Brother season 23 episode 23 “Nominations and Twist,” as per the CBS synopsis, “Tonight on Big Brother it is the new HoH Tiffany has to name her nominations.  However, the high roller twist could change everything.  This is the final week for the twist.”

In tonight’s Big Brother episode, the episode begins with Tiffany’s HOH win, and she admitted that she voted out Derek X. because she couldn’t risk her alliance with the Cookout. Kyland is devasted that Derek X. is gone home, but he knows that he was a big threat and had to go. Meanwhile, Sarah Beth says that Derek X.’s speech was hurtful, but she is going to act cool and act like she is not bothered that Tiffany is on the block.

Xavier asks Sarah Beth how she feels about the HOH, she says she doesn’t know how to feel. But, Sarah Beth is feeling comfortable because of her new alliance with Xavier, Kyland, Alyssa, and herself. Little does Sarah Beth know the Cookout alliance reins this season in the Big Brother house.

Sending Sarah Beth home has been on Tiffany’s mind for weeks because she has no loyalty to anyone. Kyland knows that he can’t protect Sarah Beth any longer without jeopardizing the Cookout.

Hannah tells Tiffany that she feels so guilty having sent Derek X. home, Tiffany reminds her that she choose them before him and that was before she even knew him. Hannah still feels awful and guilty for sending him home. If not for the Cookout, Derek X. would have been her number one in this game because he had her back.

Tiffany is with Derek F. and he tells her that he is happy that she finally got her moment. She starts talking about the Coin of Destiny with him because she knows he has the BB bucks to win. Meanwhile, Derek F. doesn’t trust her and reveals that if it wasn’t for the Cookout, she would have been out of the game already. Tiffany then goes to speak to Sarah Beth and talks about the Coin of Destiny. Sarah Beth lies to her and says that she has the money to play, she is hoping that this will stop Tiffany from putting her on the block. Sarah Beth tells her that if she is safe this week, she has no reason to come after her.

Tiffany got her HOH key and everyone joins her to see her room. Later, Sarah Beth sits down with Tiffany to see if she can get her mind directed towards putting someone else up on the block other than her. She runs Alyssa over with a bus to try and get Tiffany to put her up. After Sarah Beth leaves, Tiffany starts second-guessing herself.

Time for the Nomination Ceremony. Xavier is the third nominee because of the punishment he received last week. The first houseguest that Tiffany nominates is Kyland and the second is Sarah Beth. Tiffany says she is making this “optimal” move to improve her game. Tiffany’s target is Sarah Beth, she is not missing her chance to see her go home, next week she will get Alyssa. And if anyone saves Sarah Beth, they will be Tifanny’s target next week. Kyland knew that he was going on the block, but it doesn’t make it any less painful.

Tiffany sits down with Sarah Beth and tells her that Kyland is her target, she is lying right to her face.

The High Rollers room is about to open for the last time, if a houseguest has enough BB bucks, they can play the Coin of Destiny. This power gives a houseguest anonymous power to dethrone the HOH by a coin toss.

Tiffany calls everyone to the dining room, the houseguests are told that with a score of 3 there is a winner of the Coin of Destiny. While in the High Roller room, the winner chooses heads. Tiffany flips the coin and she gets heads. Tiffany is dethroned, but she is safe for this week and gets to compete in next week’s HOH. Kyland and Sarah Beth are now off the block, Sarah Beth is hoping they won’t be put back up. The secret HOH nominated Kyland and Sarah Beth.