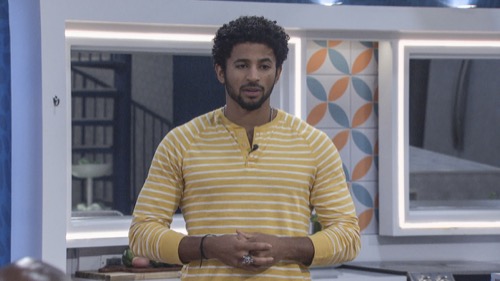 Tonight on CBS Big Brother 23 airs with an all-new Sunday, September 15, 2021, episode and we have your Big Brother 23 recap below! On tonight’s Big Brother season 23 episode 30 “PoV and Ceremony,” as per the CBS synopsis, “Tonight on Big Brother it is another PoV competition and with both Tiffany and Hannah on the block they are going to be fighting hard to take themselves off the block.”

In tonight’s Big Brother episode, the episode begins with Tiffany feeling betrayed because she was put on the block and she has no choice but to fight for the Veto. Meanwhile, Derek F. is dancing and chanting, “Tiffany’s on the block,” and he can’t wait to see her go home. Hannah is shocked, she thinks that Kyland is getting protection from elsewhere since he stabbed her in the back. She sits down with him and says she is assuming she is not the target, but she is pretty shocked at who she is up against. Kyland says there is no scenario where Xavier and Tiffany wanted to go forward in the game together.

Hannah does the math and knows that the men have an alliance. Now that Tifanny and Kyland are on the block, Derek F. hopes that Kyland sticks to the plan and it is the three guys to the end. Hannah goes to see Tiffany and tells her that she wants both of them to be fine. Tiffany says that since Claire left she only has her to trust in the house. Hannah tells her that the men are working together and it is important for the women to work together. In the end, they need Azah to work at winning the Veto and getting one of them off the block. Hannah knows that this week will determine who has control in the game and they need the women to have that place in order for one of them to win the game.

Tiffany says it was inevitable that she end up on the block, she is emotional because it is her son’s birthday. Winning this game would change a lot of things for her and her son, if she doesn’t win that Veto, she is going to lose her chance.

It is time for the Veto competition, they are going to compete for one at a time. This competition is BB Comics. It is their job to find all sixteen authentic BB comics amongst the fake ones and post them for everyone to see. When they think they have all 16 comics placed in the right order they hit their button. They have forty minutes, if they pass it, their turn is over. The player who matches the comics in the shortest amount of time wins the Veto.

Derek F. is first, then the houseguests play one after the other. This game is not easy, the small details are going to get them if they don’t pay attention. Xavier and Tiffany look like they had the hardest time, Hannah got it right on her first try but we will have to see who did it in the shortest amount of time.

Derek F. is proud of himself for coming in second, but he is a little bit nervous because he doesn’t want someone to see him as a threat, as a comp beast.

Xavier wants Kyland to leave the nominations the same, there are too many risks this week and he doesn’t want to lose their numbers.

Tiffany meets with Kyland and she says she had a wake-up call, her ego was in the way, her pride was in the way. When she lost, God humbled her real quick and she is truly sorry that she got them to this point where she has to ask him to trust her again. She doesn’t have a life in the game without him, he has to save her. She needs to have Kyland on her side, it is the only way she can stay and it is beneficial to his game.

Next, Hannah speaks to Kyland, and she is prepared to offer him whatever she can to get pulled off the block.

It is time for the Veto meeting, Kyland decides not to use the Veto and apologizes for any pain it may cause Tiffany and Hannah. He takes no pleasure in being the person to take out the first person in the Cookout alliance home, but this is the best move for his game. Derek F. has been waiting so long for Tiffany to go home, he might vote for her two times. And, he says she is a queen, but he is a Joker, and the Joker always gets the last laugh.