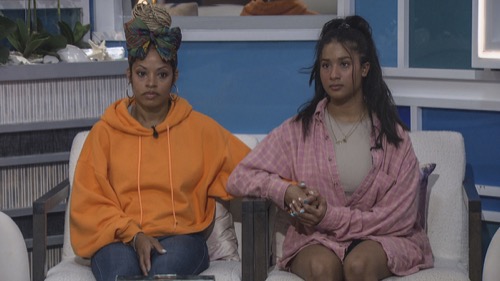 Tonight on CBS Big Brother 23 airs with an all-new Thursday, September 16, 2021, double episode and we have your Big Brother 23 recap below! On tonight’s Big Brother season 23 episode 31 “Double Eviction,” as per the CBS synopsis, “Tonight on Big Brother it is a Double Eviction and before we get to the second eviction both Tiffany and Hannah are on the Block and we will find out who will be sent home.”

In tonight’s Big Brother episode, the episode begins with Kyland’s POV, he put up Tiffany and Hannah, this was the best move for his game. Tiffany believes she will stay in the house, she has a lot of tricks in her bag and she just needs to work on Derek F. and Xavier.

Hannah thinks it is unfair that Tiffany will go home, she is the one who had the master plan of having an African American be the first person to win Big Brother.

Tiffany goes to see Azah and says she thinks she can stay. She thinks Derek F. wants her gone and doesn’t understand why Kyland or Xavier would think that Hannah would be more willing to work with them than her.

Azah asks Kyland how he is doing, he says the game has become easier and harder, then he starts rambling. Azah says to herself that this is the last time she asks him how he is doing.

Xavier is sitting with Kyland, he tells him that he came in with a goal of being in the final two. Kyland tells him that he has a lot of student loans that he wants to pay off. Xavier says that everything he does in his life is motivated by family. He also has a brother who passed away and wants to take care of his nephew that is left without a father. It’s his biggest motivation for winning this game and he is not letting anyone get in the middle of that.

Tiffany goes to see Derek F. that in the end, Hannah is not going to care what she promised to anyone. She doesn’t think she can count on his vote, but she is working on him anyway Xavier is her make her break it, and she needs to convince him that she is what is better for his game.

Tiffany goes to speak to Xavier and work on him to try and get his vote. Tiffany would be a shield for Xavier, but the question is if he can trust her or if she would get rid of him the first chance that she gets. Derek F. tells Xavier that Tiffany is trying her best, Xavier agrees. Tiffany told the two of them that Hannah is coming after the two of them. Hannah is a competitor and well connected in the jury, she may just be a bigger threat.

Everyone is in the living room and Julie announces that indeed this season the first African American will be crowned as the winner of Big Brother. Then she asks Tiffany why was she motivated to create the Cookout and see it through to the end. Tiffany says she could not target any faces that looked like hers, she wanted one to win and they had the same goal and she is proud.

Xavier says it was groundbreaking that they made it to the final six, all their hard work paid off. Derek F. says it was a challenge to keep this group together but it was worth it, he is very happy and loves each and every one of the final six. Hannah says she was a hot mess when she had to say goodbye to Derek X., he put his loyalty and trust in her and she felt like she betrayed him. Kyland says it added a layer to the game that never happened before, at times it was conflicting.

At the jury house, we see Sarah Beth arrive and Derek X. has mixed feelings there are other players he would have liked to see go first. They sit down and watch a video of when Tiffany won the HOH. Then the coin flip where Tiffany is dethroned. On to the secret HOH, and then Hannah winning the Veto and saving Xavier. In her goodbye messages, Kyland told her about the secret alliance and Sarah Beth guesses correctly the members of the Cookout.

Sarah Beth says that she is struggling with all the lies that Kyland told her. Next Claire arrives in the jury house and then Alyssa who thinks there were bigger targets in the house. Together they also watch a video and they see where Tiffany won the second HOH this season and took Claire out. Derek X. can’t believe that Tiffany took out Claire.

Time for the live vote and eviction. Derek F. chooses to evict Tiffany, Xavier for Tiffany, Azah for Tiffany. It’s official, with a vote of three to zero, Tiffany is evicted from the Big Brother house.

Tiffany is with Julie and she says that she had a final two with Kyland, she doubted him but she still included him in her final two but she developed a great friendship with Hannah and wanted to go to the end with her. She realizes that the reason why she got voted out is that she won the two HOH’s back to back. She asked for forgiveness after, but she should have asked for permission to win a second time. Julie calls her the master strategist.

She says it was always in her heart to have an African American win and she did what she did to accomplish that. Julie tells her that it is double eviction night again. Then, Julie calls the houseguests in the living room and announces that she wants to congratulate them for making it to the final five, that’s the good news. The bad news, another one of them will be leaving the game tonight. For the first time ever, they are holding back to back evictions.

The HOH competition begins and it is called BB Ballers and it will be played in two rounds. Each has twelve silver balls on the grass at the end of the ramp in front of them. In front of them, they have colored balls and they will roll them down the ramp in an attempt to knock off the silver balls. They can only retrieve roll-on ball at a time. The first person to knock off all twelve silver balls will go to round two. The winner of round two will become the HOH. Xavier advances to round two. Azah also advances.

The two now face off against each other. In round two, they must roll their balls onto the grass. The houseguest with the most balls on their grass after ten shots will be the next HOH. Azah wins and has a few moments to decide who to put up on the block. Azah nominates Xavier and Hannah. The two have one last chance to be saved in the Veto competition.

Time for the Veto competition and it is a BB classic called What The Bleep. The houseguests ill see a series of videos containing statements made by their former houseguests this summer. Each statement will leave out a bleeped-out word or phrase. Julie will give them two answers, they have to decide which one is correct. It comes down to a tie between Kyland and Xavier, Kyland wins.

As the winner of the Veto Kyland can remove someone from the block, he decides to take Xavier off the block because of the promise that he made to him. There is only one option, Derek F. goes on the block.

Time for the live vote and eviction. Both Kyland and Xavier choose to send Hannah out of the game.

Hannah is with Julie and says when Azah nominated her, her face dropped. Hannah says she thought Azah’s target was Kyland, she was pretty vocal that he was her target. She thinks that for her own game, Azah should have kept her because she thinks the men have a final three. Hannah doesn’t believe that she was Azah’s target. She says she didn’t feel that without Tiffany she had a path to the end of the game and she was right. She tried making deals at the end, but it didn’t work. There were moments that were challenging, she had a hand in sending out two of her biggest allies home outside the Cookout. In the end, she is still happy that there will be a black winner in Big Brother this year.