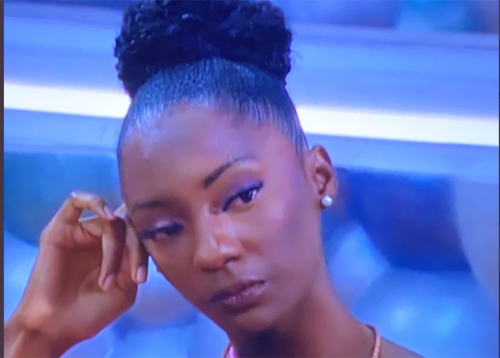 The episode begins with Xavier putting Kyland and Azah on the block. His goal is to ensure that he and Derek F. make it to the final three and he plans on doing everything he can to with the Veto. Kyland has never been this stressed, the Veto is so important. Derek F. wants to go to the final three with Kylland and Xavier and is sad that he may have to send Azah home. Meanwhile, Azah knows that winning the Veto is the only way she is going to stay in the house.

Derek F. shares with Azah that he has a final two with both Kyland and Xavier and she is shocked, she thought they knew everything about Derek F. in the house. But now, she realizes that she is on her own in what is left of this game. Derek F. then goes to speak to Kyland and wants to make sure that they still have their final two deal, Kyland won’t really answer the question and he takes it as a threat like Derek F. is looking for a guarantee if he wins the Veto and sends Azah home.

Meanwhile, Azah goes to speak to Xavier and tries to work him over to try to get him to take her to the final three. Xavier knows that if he sits near Derek F. or Azah he can win the game because they are both floaters, so he is rethinking his strategy. Kyland and Derek F. continue to argue about the whole final two deal and Derek F. is really frustrated and finally says he is taking it off the table for now. Kyland leaves the room saying he thinks he should end the conversation now.

Derek F. sits down to speak to Xander who says he is trying to get him to a final two with him. If the nominations stay the same, Xander wants Derek F. to vote out Kyland and take Azah to the final three. Derek F. says he is worried about Azah winning, but Xander says she is no good in competitions. Even though Kyland has been shady, Derek is still worried about keeping Azah over him. Xander says the gravity of the next decision is huge.

Xander won a reward and decides to take Azah along for the CSI Vegas screening. She gets a break from the game and she loves CSI. There is food and blankets for the two of them, it’s a party for two.

After the movie, later that night when everyone is in bed, Derek F. calls Azah over and apologies to her for not having her back and says that he is still considering taking her to the final three. Azah appreciates it, but she knows that he has his deals with Kyland and Xavier. Azah tells him that Kyland cannot win that Veto.

It is time for the final and most important Veto competition of the summer. Whoever wins the Veto gets the sole vote to choose who to evict this week. The competition is called BB Winning Days, each round the players will be given an event that happened in the BB house and it is their job to determine what day the event happened. They have to collect balls that add up to the number of the day and put them on a cart. If the balls fall off or they fall off a see-saw that they have to start again.

Kyland wants to talk Veto with Xander but he won’t. Azah doesn’t know if she can trust Derek F. to save her and Derek F. is conflicted, he doesn’t know what he is going to do. Meanwhile, Xavier wants Kyland to leave and he has to convince and then trust that Derek F. will do that if he keeps the nominations the same.