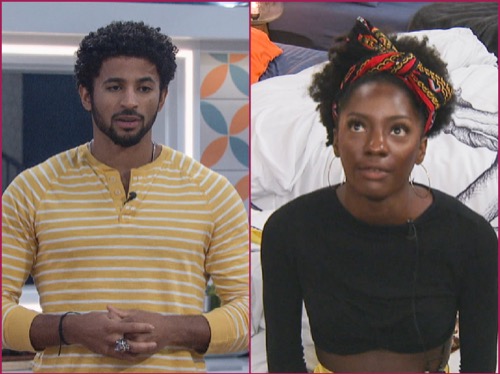 In tonight’s Big Brother episode, the final four sitting in the living room and Big D. has a big dilemma. With Xavier having all the power this week, Big D. could be on the block or he can cast the vote to choose who goes to the final three with him and Xavier. Big D. gives Kyland advice that he gave to Azah, there is a possibility that he will have to send him home.

Kyland doesn’t appreciate the conversation, at the end of the day, he wants Azah to go home and he wants Big D. to have his back. Big D. is not shy to say that he doesn’t know what he is going to do and Xavier is getting nervous. Azah is shocked that Big D. struggles with this decision because he was her ride or die from the beginning. Azah tells Xavier that if he uses the Veto on her she has no problem sending Kyland home. Xavier tells Big D. to be the Big Brother player that he wants to be.

Big D. tells Azah that he carried her through in the game and had he not, she would have gone a long time ago. Azah is upset, she says that is not true. Azah cries to Xander, she doesn’t understand why Big D. has to put her down. Big D. tells Xavier that Azah is getting on his last nerve. Xavier tells him to cut her some slack. Big D. says he won’t speak to her anymore, he is over her. Xavier doesn’t trust that Big D. will do what he needs to be done. So, he is considering taking Azah off the block so she doesn’t do the dirty work for him.

In the jury house, everyone is surprised to see Tiffany who says she views it as an honor to be voted out because they viewed her as a threat. Tiffany tells them that she had a final two with Kyland and was surprised that he put her on the block. Derek X. thinks that this wasn’t a good move for Kyland, he pissed off a lot of jurors and got a lot of blood on his hands. Tiffany says she saw a lot of color in the house and she didn’t want to go after any person of color because none have had one Big Brother in the past. Then she tells them how she formed the Cookout and the jurors were all chess pieces. Derek X. tells Tiffany had she made it to the end, he would have voted for her to win.

Hannah says that she is upset that Azah didn’t take the opportunity to take out one of the strong players when she had the chance. Overall, the jury doesn’t seem to be a fan of either Bid D. or Azah to win BB.

It is now time for live Veto and eviction. Xavier must decide what he is going to do with the Veto. Xavier says that he has decided not to use the Veto. Finale night is a week away and only one of them is going to make it there. Big D. has to cast the last vote. Big D. stands up to cast the sole vote to evict, he evicts Kyland. Kyland looks Xavier in the face and says he kept him when the chips were down, Xavier says it is a game. Kyland starts speaking about Xavier’s nephew and it is getting under his skin, he mentions something about not being a good role model. Julie comes on the speaker system and tells Kyland to leave the house.

Julie is with Kyland who was just evicted, he asks him if he is shocked. He says he made a mental commitment not to be shocked by anything. Julie asks him why he didn’t give Big D. the assurance that they were good for the final two. Kyland says he wanted to play up front, he would have been lying to him had he said he would take him to the final two. He doesn’t wish he lied to him, but he wishes he spoke to him a little bit more. Kyland says that he had every intention of keeping his final two deals with Xavier. Kyland says as soon as Xavier didn’t use the Veto he knew what was going to happen.

Julie announces that they are doubling the prize for America’s Favorite Player, from twenty-five thousand to fifty thousand dollars, and it will be announced during the season finale.