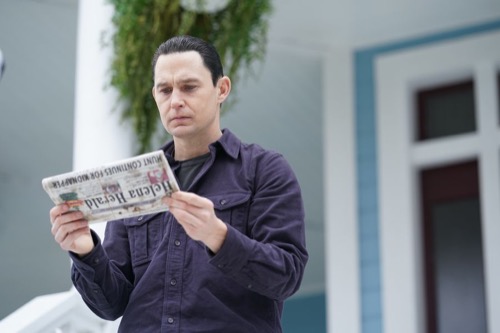 Tonight on ABC their new thriller by David E. Kelley, Big Sky premieres with an all-new Tuesday, February 9, 2021 episode and we have your Big Sky recap below.  On tonight’s Big Sky season 1 episode 8 ‘The End Is Near,’ as per the ABC synopsis, “Cassie and Jenny work against the clock to find Ronald and prove Legarski’s guilt, calling on Grace to join their efforts and bravely help them in the process.

Just when all the pieces start falling into place, Ronald’s emotions get the best of him as he makes an unthinkable decision, even for him. Merilee plays an unwilling and life-changing role in turning the case on its head.”

In tonight’s episode, Cassie and Jenny head upstairs after Ronald and there is a window open, he is gone. They find a hole in the wall, obviously, Ronald was after something. We Then see him, Merrilee is calling him and he takes the phone, smashes into the steering will and then throws it.

Tubb is questioning Merrilee and giving her a hard time. She says she didn’t know who he was, he gave her a fake name. Cassie sits down with Merrilee and she says she is the biggest dope. We see Ronald run into the house, his mother is still sitting in the chair, dead, he stares at her. Then he puts her in a chair and wheels her down to the basement.

Tubb tells Cassie and Jennie he needs to ask them questions. Meanwhile, we see Rick Legarski going into an MRI machine. Then we see his lawyer tell him that his accomplice was in his house last night and they need to find him. Rick says he has no idea who he is. Merrilee walks in, she tells Penelope they want another statement, they think she is involved. Penelope tells her that she needs to get a lawyer. Rick asks if she locked the back door because he always reminds her about that.

Ronald is washing the kitchen floor and he hears on the radio the announcer saying that he is depraved and he gets very angry. He loses it, shouts that he keeps a clean house, smashes a plate on the floor.

Ronald is watching the TV, eating his cereal. Then we see downtown, a paperboy is delivering the daily paper. The boys looks at the man’s face on the paper, it is Ronald.

Tubb tells Jenny that Merrilee is getting a lawyer, but she might talk to Cassie. Jerrie is there, she tells Tub b that she is staying with friends and she should be ok. Cassie is at the hospital, she is speaking to Rick’s doctor who says he has no idea what is going on in Rick’s brain, and Penelope walks up. Cassie tells her that there is a monster in that room. Penelope tells her that they both have a job to do.

The paperboy drops Ronald’s paper, he turns around and looks at the house.

Rick is in the middle of taking a polygraph test, Penelope is watching. Meanwhile, Tubb tells Cassie and Jenny that Rick is getting a polygraph and if he cannot remember, he can’t contribute to his defense and he will be deemed incompetent. Tubb tells them just to wait and see how it plays out. Cassie and Jenny have no intentions of doing that. Cassie tells Jenny that she is going to see Rick, she shot him, he saw her face, maybe she will get a reaction out of him.

Ronald steps out of his house to get the paper and notices his face on the front page. Little does he know, the paperboy recognized him and took pictures with his phone. But he did know and grabs the boy from behind. In Ronald’s basement, there is a cell, and puts the boy inside, he also brings down his bicycle and throws it on the floor. The boy tells him that he will never get away with this.

The boy says he was taking pictures for a school project. Ronald tells him that he is not just a snoop, he is also a liar. He then asks his name, it is Erik. Erik tells him that people know he was coming to take a picture, if he goes missing, they are going to come looking. Ronald screams at him, more than once and tells him that he highly recommends a good scream, he feels better.

Cassie and Jenny are in the hospital, they are both dressed in scrubs. Cassie goes into Rick’s room while Jenny listens in. Cassie closes the blinds and tells Rick to look at her, straight at her. He looks at her and doesn’t recognize her. She tells him her name and asks if he remembers her, he asks her if she shot her with an arrow.

Outside the hospital, Cassie says she just can’t believe that Legarski can’t remember anything. Jessie says maybe she needs to take a try at this.

Erik’s mother knows that he is missing, she goes to see Denise and says he called her and told her that he recognized someone in the paper and mentioned a reward. Denise calls Tubb and tells him about Erik missing, she says she got a copy of his paper route. Meanwhile, Erick asks Ronald if he is going to kill him, Ronald says I’m thinking while he ties up Rick’s hands with duct tape.

The doorbell rings, Ronald puts duck tape on Erik’s mouth and goes to answer the door. Upstairs, the priest is there to see his mother, they had an appointment. Ronald says that her sister has cancer and that is where she went, to help take care of her. The priest says she didn’t mention any of that, she only talked about him lately, and maybe he should let him in so they can talk.

Denise tells Erik’s mom that police are going door to door. Rachel feels terrible, she is his mother and she didn’t have time to listen when he called her at work earlier that day.

Ronald is in the living talking to the priest, he says his mother was worried about him. Meanwhile, Erik is trying to make as much as noise as possible in the basement. Ronald tells the priest that he tried to drown him when he was a baby, the priest tells him that it is called a baptism. He heard his father says hold him under, he needs to toughen up. Erik is making headway, the priest hears it and Ronald says it is just the dog. Erik managed to move himself and the cage towards a table where there are tools.

Ronald tells the priest it is time to go. Erik sees Merrilee dead and starts screaming. Ronald comes running down the stairs and tells him that if he isn’t quiet he is going to kill him. Ronald turns around and the priest is there watching, he makes a run for it and Ronald runs after him. The sink is full of water, Ronald was washing the dishes, he jumps on the priest and sticks his head in, drowns him in the sink, then throws his body down the stairs.

An Amber alert has been issued for Erik, he is believed to be in immediate danger. Jerrie walks in to see Cassie and Jenny, she says she keeps seeing him, but he is not there, it is like it is playing tricks on her. Cassie and Jenny go to the hospital, Cassie goes into Rick’s room and tells him that he killed her husband. Penelope is there and tells him that he is not competent enough to answer that questions. Cassie yells at him at says they have a son. Rick says that if he did what they said he did, he hopes surely to die as well.

Cassie and Jenny are in the car, Jenny tells her that Rick is not there. Jenny says if he goes free, she will kill him, and maybe that is for the best.

Erik is still in the cage, he is crying, he sees the two dead bodies and tries to regain control of himself. He is rubbing his hands against the back of a chair he is sitting in so he can get lost.

Cassie is in a questioning room with Merrilee who says she has no idea what the truth is. Cassie says she believes her, but it doesn’t look good. Merrilee says she doesn’t know. Cassie says her best bet is to tell them what the man was looking for in her house. Merrilee says whatever the pretense was for Mitchell to dance and kiss her, he made her feel something she hadn’t in so long, he reminded her that she is alive. Cassie says there is a boy out there, his name is Erik and they are trying to keep him alive.

Ronald says to Erik, I see you met my mother, she is cold. She is nice, well she was nice. Then he asks Erik if he is going to be nice. He pulls the tape off Erik’s mouth and says he is going to ask him questions, if he lies he is dead. He asks about why he took the photos, he says he recognized him in the paper. All of a sudden, Erik shoots the stable gun at Ronald and then shows him that he has a taser and tells him it looks like fun.

Ronald is pouring gasoline all over the basement and singing, “if you are happy and you know it.” He turns to Erik and asks if he has a match.