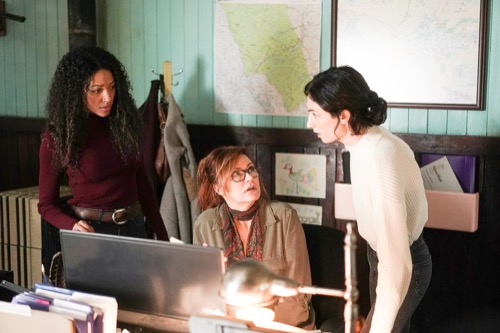 Tonight on ABC their new thriller by David E. Kelley, Big Sky premieres with an all-new Tuesday, February 16, 2021 episode and we have your Big Sky recap below.  On tonight’s Big Sky season 1 episode 9 ‘Let It Be Him,’ as per the ABC synopsis, “In an action-packed episode, while knocking on doors and searching for clues, Cassie unexpectedly comes face-to-face with Ronald, which puts her in danger and triggers her memory from the pair’s prior meeting.

Elsewhere, not feeling like she can trust her husband, Merilee makes a life-changing decision that puts both her and Rick’s fates into her own hands.”

Ronald has staples in his forehead, he goes outside and hides the priest’s car in his portable garage. Erik asks Ronald if he is going to kill him. Ronald tells him to shut up. We see Merrilee, she goes upstairs to her room and thinks back to a day then Rick was in a good mood and they were making breakfast. Erik tells Ronald if he kills a kid it won’t even go to trial, this is Montana, they don’t take kindly to those types. Ronald keeps telling him to shut up, grabs his gun and aims it at him, tells him not to say a word.

Rick is having a nightmare, he sees all the girls that he trafficked, he says he is sorry it just got out of hand. Merrilee is there, she tells him to wake up and asks who he was apologizing to, he says he can’t remember. Penelope walks in and asks to speak to Merrilee, she wants to know whose side she is on. Merrilee says she is on her own side.

Cassie knocks on Ronald’s door, he answers. She asks if she has seen the newspaper boy, he says it is not something that he notices. She asks if Helen Pergman is there, he says she is away, she leaves her card. Cassie has a memory, she has seen Ronald before at the warehouse.

Cassie goes back to the office, Denise and Jerrie are there. Cassie shows Jerrie a photo of Ronald and she says that is definitely him. Cassie grabs her jacket and runs out.

Ronald tells Erik to give him the taser, Erik tells him to go to hell. Ronald has his own taser and zaps the cage Erik is in, he drops the taser and Ronald gets it. Then he starts to spin the cage around and smash it against the walls to scare Erik.

Cassie, Jenny, Tubb, and the rest of the state troopers are at Ronald’s house and in position. Ronald knows they are there, he runs down to the basement and gets Erik. Tubb tells Ronald to come out he is surrounded. He gives one last warning and they go in. They smash the door down and Ronald had a trap, a firearm propped up that goes off and shoots one of the troopers. They hear a funny noise in the house and Tubb says the place is booby-trapped wired to blow up, he tells everyone to get out. But, Jenny is in the basement, she found Erik and says she is not leaving without him.

Jenny gets out, but she didn’t save Erik, it is Ronald’s dead mother. Ronald and Erik are not there and the house is on fire. They must have got out through a basement window. Cassie shouts at Jenny and tells her to never do that again, she doesn’t want to have to tell her son that she is never going home again.

Penelope visits Rick and tells her there has been a development. Police are after his accomplice, he shows him a photo of Ronald, and Rick says he doesn’t know him, but meanwhile, his fingers are tapping. Penelope tells him that if she finds this twelve-year-old boy she can use that on his side. Ronald says he doesn’t know him and Merrilee calls him a liar.

Jerrie says it is so strange to look at a photo of Ronald, and she didn’t peg him as a killer, especially of a child. Then we see Ronald, he is in the priest’s car, and he has Erik. Ronald is singing, he stops the car and goes to look in the truck, Erik is there and tied up. Ronald tells him that if he is nice, he will let him ride in the front like a big boy. Ronald’s name is all of the news, Erik’s mother, Rachel, is with Jerrie and Denise, they are trying to keep her calm. Jerrie tells her that she really doesn’t think he will hurt him.

Merrilee is in her room, thinking back to times with Rick when they were close.

Tubb is in the air, he is in a helicopter, Cassie and Jenny are in a truck and looking for the Tesla. Cassie and Jessie see them, the same plates. He must have seen them, he is flying down the road. Tubb says he is on his way.

Merrilee goes back to see Rick, she tells him that she has been reminiscing about their marriage, their vacations, the drives they took to just be together. He says that’s nice. She says the songs he used to sing, he would sing them for reasons. She says it dawned on her that one night, he was about to bash her skull with a hammer. She brings the hammer and pulls it out of his purse. He tells her that he doesn’t like her tone. She says she has a hard time with him killing two people, thinking about killing her and he goes free. He tells her that her menopause is talking. She says that is the wrong answer and means his memory is back, she lifts the hammer and smashes him over and over again with it. Rick is dead, there is blood all over Merrilee. Nurses are running in the room and they find him dead, full of blood, and Merrilee sitting on the bed.

Cassie and Jenny get close enough to the Tesla to see that Erik is alive. Jenny tells Cassie to pull over near the car, she is going to try to shoot the tires. They see the priest behind the wheel, the car is on auto-pilot, the only way to stop it is to get in front of the car, it will sense the vehicle and stop. There is debris on the road, Cassie spins out the truck and they stop. The Tesla stops within inches of them. Erika is ok, he was tied up in the passenger seat. Erik tells them that back at the bridge, Ronald jumped. Erik says he can’t believe he is not dead. Tubb gets a call, he tells them that Rick is dead, he won’t be going free, his wife killed him. Jenny says that is some kind of justice, Cassie says yes, but not the kind she was looking for. Cassie says they are going to find Ronald, Jenny says damn right they are.

Erik is reunited with his mother. We see Merrilee being arrested and she is smiling, Rick is behind her in a stretcher. Then we see Ronald, driving his rig down the highway that he painted blue, and he is smiling.