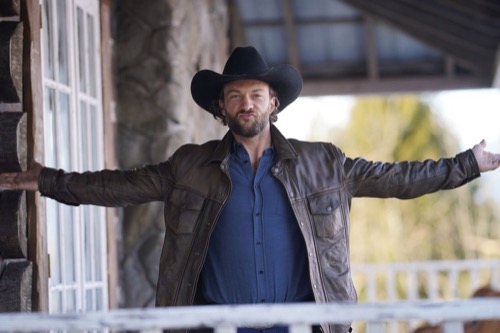 Tonight on ABC their new thriller by David E. Kelley, Big Sky airs with an all-new Tuesday, April 27, 2021 episode and we have your Big Sky recap below.  On tonight’s Big Sky season 1 episode 13 ‘White Lion,’ as per the ABC synopsis, “Cassie and Jenny hear that a body has been discovered on the Kleinsasser ranch and, fearing the worst, Jenny takes the investigation up a notch, but the Kleinsassers have a plan of their own.

Meanwhile, Cassie teams up with Lindor to follow a hot lead on Ronald, who, suspicious that his whereabouts have been revealed, decides to do some damage control—or perhaps just damage.”

In tonight’s Big Sky episode, the episode begins with Cheyenne running out of her hiding place in the woods to check on Blake who John Wayne hit with a shovel. Cheyenne finds the belt buckle that belonged to Cole Danvers, she drags Blake out of the ditch that he fell in.

Cassie and Jenny are with Rose, she said that she told the sheriff it was Rand and John Wayne who hurt her and nothing happened. Cassie tells her that her story matter and they believe her. They hear someone pulling up and Gil walks in. He tells Cassie and Jenny to leave and not to come back, they don’t know what the Kleinsasser’s are capable of, they are ruthless, every last one of them. Jenny leaves her card, she tells Gil that she hopes he will change his mind and want to talk to her.

John Wayne returns where he left Blake and finds him gone.

John Wayne and Rand bring Horst to where Blake’s body is found, at the bottom of a cliff, Horst says he is going to call the sheriff, the two say they had nothing to do with it.

Arthur, aka Ronald, meets with a guy to buy a rig from him. He gets inside to see how it feels and talks to his mother’s picture on his cell phone, he tells her that it is not what she is thinking, he is happy now he found somebody special, a woman who understands him and she is wonderful. Then he gets upset and says, “I don’t care what you think.” He imagines himself driving down the highway.

Cheyenne looks up Cole Danvers on the internet and discovers that he went missing. Cheyenne hears her mother screaming outside, she goes out and Horst tells her Blake is dead, he fell off a cliff.

Cassie asks Jenny if she heard from Blake, she says no. Jenny asks her what are the people afraid of. They start talking about their lives, Cassie talks about her life and how she moved on. Jenny gets a call from Denise, she picked up something on the scanner, a body was found on the Kleinsasser ranch, possible suicide and 6 am that morning. Jenny tells Cassie that it is Blake, she is going to see the sheriff and speak to the girl that works for him, Angela, she looks like she wants to talk.

Horst and the sheriff are at the scene where Blake’s body was found, he tells Blake’s mother it was suicide and she slaps him in the face. Cheyenne turns to John Wayne and says, you can thank me later.

Arthur is with Scarlett and her daughter and tells them he wants to take a picture of all three of them, then he tells Scarlett to be in the middle. Before he takes the picture, he says you know what they say when three people are photographed together, the middle one dies first. Her daughter says that is so creepy. He takes his photo.

Jenny arrives at the sheriff’s office, she asks Angela what happened at the ranch, she confirms it is Blake. Angela writes on a sticky note “talk later,” just as the sheriff walks in and tells her to go back home there is nothing there for her.

Cheyenne pours her mother’s drink, she asks her if she remembers when she was little and she painted her nails all different colors. Blake told her how beautiful her nails looked and her mother told her she could be anything she wanted to be. Cheyenne tells her to stop crying, it won’t change a thing. John Wayne walks in and asks Cheyenne if he can have a word for her in private.

Outside, John Wayne asks her what she is doing, she kicks him in the privates and he calls her a bitch. She calls him a piece of trash who killed Blake and she will tell everyone unless he pays attention to her. She tells him to mess with the white lion and see what happens. John Wayne says when the old man dies she is going to find herself in a trailer park. Cheyenne roars loudly right in his face, pats the side of his face, and walks away.

Scarlett and Arthur are in the car driving, her daughter is in the back seat. Just before he drops off Scarlett she says she left her phone at home. Arthur offers to go back and get it, but she says no, she can’t be late. Arthur continues on his way, we hear a text, Scarlett’s phone is in the van and she gets a text from Mary that reads, “Arthur isn’t who you think he is. Call me!” Arthur heads to Mary’s house, he asks to go in, she says it is not a good time. He says they got off on the wrong foot, he believes in do-overs and wants to fix his mistake. He tases her and goes into the house.

He is then eating cereal, Mary is wrapped up in a blanket, sitting on the couch, with duct tape all around her. He tells her she has been a busy lady who can’t seem to let things alone. He has an Exacto knife in his hand and he cuts the front of the blanket, there is blood. He goes to her computer and checks her search history, he sees Dewell & Hoyt Private Investigators. He says she has been busy as a bee, she just had to tell him the truth, he is a fair man. He sings, “liar, liar a woman in a blanket on fire.” He shouts at her, “am I a killer?” She tells him he is a monster and he starts stabbing, again and again, blood is squirting everywhere.

John Wayne is with Rand, he tells him that Blake knew about Cole Danvers, he was going to tell everyone. The two are putting the remains of Cole in a barrel with chemicals. Rand smells one small bone and John Wayne grabs it and puts it in the barrel. Rand asks if this is why Blake killed himself and John Wayne says to forget about that but keep an eye on Cheyenne she is asking too many questions.

At the office, Denise is listening to Mary’s voicemail where she says that she knows where Ronald is. Jerrie is there, so it Mark and Cassie who leave to check it out. Meanwhile, Jenny meets with Cheyenne, she asks her about Blake, how did he die. She says he fell off a cliff. Jenny says they can trade, she will tell her something, if she tells her something. Jenny says that it was Rand and John Wayne who attacked Rosie, not Blake. Cheyenne says, “Cole Danvers.”

Cassie is in the car with Mark driving to Mary’s house. He asks her about her son and she says what with the interrogation. She tells him to reveal something about him. He lost someone to something he is sure he could have prevented. He lost something, to which he kept driving and driving until he ran out of road. When he stopped there was a poster, “death smiles at all of us, all we can do is smile back.” That poster saved his life. She says, his name is Andrew, he died in the line overseas.

He says he is sorry to hear that, he lost his sister. A man named Richard Middleton confessed to talking to her from a mall parking lot. He sent her into the store and was waiting for her. She didn’t come back and he knew something had happened. They never did find her body.

Arthur is cleaning up Mary’s living room, he is singing, “Mary tried to call the police, pop goes the weasel.” Then he picks up one of the dolls and says, you see mom we keep a clean house, I clean up my mess. There is a knock at the door, it is Cassie and Mark. Arthur drags the body away from the living room and crouches down behind the sofa. Mark tries the door, it is locked.

Jenny calls Denise and gives her Cole Danvers name, there was a missing person’s report filed but because he was an adult, it was dropped. Cassie tells her to check in on Justin, she will be back later that evening.

Cassie asks Mark if he thinks they should grab a bite and come back. He looks on the floor and finds one of her dolls on the floor, he says he just found probable cause to kick her door in. They go inside with guns drawn, Mark sees the basement door and they both head downstairs. In the basement, they find a freezer with a lock on it. Mark removes the items on top, grabs a hammer to break the lock and inside they find a dead body, but it is not Mary, this guy has been dead for a while. Mark says he will call it in.

Angela goes to see Jenny, she says she is scared, but she was careful. Angela opens her purse, she gives her proof that the sheriff knew what happened to Rosie was no accident and he covered it up. And, she doesn’t think Blake killed himself. Angela asks for a drink then asks Jenny if she will promise to protect her. Jenny says she will do everything she can.

Arthur is in his new rig, with one of the dolls sitting in the passenger seat.