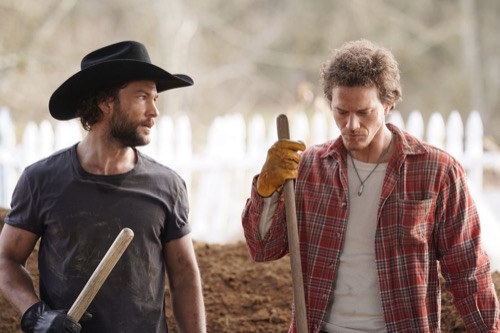 Tonight on ABC their new thriller by David E. Kelley, Big Sky airs with an all-new Tuesday, May 4, 2021 episode and we have your Big Sky recap below.  On tonight’s Big Sky season 1 episode 14 ‘Nice Animals,’ as per the ABC synopsis, “Cassie, Jenny, Jerrie, and Lindor work to get things back on track when the motel is reduced to rubble and both the Kleinsasser and Ronald cases not doing much better.

At the ranch, Cheyenne seizes an opportunity to shift the family power dynamic in her favor and all it will take is the truth.”

In tonight’s Big Sky episode, the episode begins at the motel when the truck ran through it, Jenny is alive, Angela is covered by rubble and there is blood around her head. Mark and Cassie are at Mary’s house, she sees a door opened and neither of them did it. Mark says it is Ronald, he did it and took her body. Cassie gets a call from Jenny who tells her what happened. Sheriff Wagy comes over to Jenny, she tells him that the Kleinsasser’s did this and Angela is dead because of him, he won’t get away with it.

Jerrie shoes up at Mary’s house, she sees them bring the body they found downstairs in the freezer and asks if Ronald did that as well. Mark says they can’t rule it out. Jerrie tells him that Mary had a sister who doesn’t live that far away.

At the Kleinsasser’s house, Wagy is there and tells Horst that Rand killed Angela and she was one of his people. Wagy wants to know if Horst ordered this, he says no. He tells her that Jenny witnessed it and she is alive. Horst says he has witnessed as well that puts Rand on the ranch. Wagy goes on to say that Angela was speaking to the detectives, he needs to figure this out, he can’t protect him.

Wagy goes into his car and finds Cheyenne in the back seat, she asks Rand or JW, who did it. He tells her that she doesn’t know who she is messing with, she tells him it is the other way around.

Arthur surprises Scarlett and her daughter with the truck, he says he has everything ready to go and a place they can stay, but they need to get there before someone else does. Arthur tells Scarlett he found her phone, he tells her this spot is special and he is in a hurry to have fun and smores for breakfast.

Horst asks Rand whose bright idea it was to drive through that motel, Rand says it was him. Rand tells him he should be speaking to Cheyenne, she was speaking to Jenny. Horst hits him with a stick and tells him that is not a way to solve a problem. He tells Rand and JW that tomorrow they are going to bury their brother and after that, figure out what they are going to do with the barrels down at the back pasture. He tells the two to dig a grave for Blake, by hand. A look at the hole they dig and consider what is going to happen to them if they do something like this again.

Denise asks Jenny how they knew Angela was meeting her in the first place. Jenny says she wouldn’t be dead if she didn’t meet with her. Denise tells Jenny she should go home and have a bath. Denise hands Jenny a paper, it is the address for Nora Danvers, the missing ranch hand’s mother.

Arthur drives his family out to the wilderness where there is no cell phone service. Arthur tells Scarlett to take Phoebe and go explore, he will unpack.

Mark tells Cassie they found more blood in the living room, it looks fatal from the amount. Mary’s phone, the laptop is missing from the house. The man in the freezer, the prints came back for a man named Steve Loring, disappeared eight years ago, he died from an ice pick to the back of the head, not Ronald’s style.

Jenny goes to see Nora, she tells her she is there to find out what happened to her son. She says Blake Kleinsasser hired her, Nora says that name is cursed and she doesn’t want to hear it. Jenny asks her if she wants revenge, Nora sits down to sit with her. Nora says Kleinsassers are white trash. Her son was on the ranch and saw something that was wrong, then he disappeared. They sent some man named Gil to tell her that her son stole a truck and ran off. Cole never called her after that, he just vanished.

Rand and Blake are digging the hole to bury Blake. Rand says he is scared, JW tells him he is not going to jail, he is going to take care of him. Rand says when they take over the ranch, he wants to make one of those mazes and scare folks. He says he has all these ideas he comes up with when he is alone in the woods.

Margaret tells Horst that she wants to say a few words at the service today. He tells her that she can say what she wants. She tells him that before she puts her son in the ground, she wants him to tell her one truth for once. He says every time he looks at their kids all he can see is what is wrong with her. He basically tells her she is not worth anything, she is dog meat.

She tapes the side of his face and says there you are Horst, with all your truth, that is the most honest thing he has ever said to her and she hears it loud and clear. She tells him that when he is gone, what he has won’t be worth a jar of spit. Then she goes close to him and whispers in his ear, she will kill him. He says he expects nothing less, she kisses him and they walk out.

Cassie and Jenny go see Gil and say that Nora said he went to see her about her son. Rosie comes out, Gil tells her to go inside. Gil says he tried to help Cole, he told him to keep his head down, but he started to ask questions. He started causing problems, one night he got into it with Horst, Rand saw it and killed Cole. Gil says the only reason he is alive is that they paid him off.

Gil takes Jenny and Cassie to the water, he says Montana gets the majority of its drinkable water from natural sources. Horst made a deal where waste could be dumped, Wagy brokered the deal. Gil didn’t see the harm of it in the beginning.

Cheyenne is in the kitchen with Rand, he tells her that he can’t be speaking to her. She asks him what is going on in the back pasture. She says she knows lots of things, what happened with the ranch hand, at the motel. JW comes in and Cheyenne tells them everything she knows, she says they have a big mess that needs sorting and all they have to do is ask.

Cassie gets a call from Mark, the guy in the freezer, apparently, he fathered a child with Mary’s sister, Scarlett. Scarlett’s been unreachable, but Mark has an address, he is heading over there and Jerrie is going with him.

Arthur is in the woods, he has Mary’s body and dragging it through the dirt. Scarlett calls out to him, he doesn’t answer. Her daughter finds blood on a leaf, they turn away.

It is time to bury Blake, Margaret hugs JW who says he will miss him, she whispers in his ear that she knows what he did.

Arthur runs up to Scarlett and her daughter, he says he heard something and went to look to see what it was, but he found nothing. Phoebe tells him that she found a leaf with blood on it. Arthur then explains to her the circle of life, a little too graphically and Scarlett reminds him that she is only ten.

Mark and Jerrie are in the car outside Scarlett’s house, he tells her that he lost his sister to a man like Ronald. He asks her how she feels about guns, she says her dad used to take her to the shooting range, he hands her a gun before they go in.

Cassie and Jenny are with Gil, they go down to where the barrels are. Gil opens one of them and there is a skeleton inside.

At the Kleinsasser’s house, there is a gathering after Blake’s funeral. Wagy tells Horst that he is going to have to take Rand in for questioning. Margaret comes downstairs with a hammer and takes a painting off a wall. She gives her kids something to hang and tells them to do it now, she wants them to see what lives in this house. Horst tells everyone to get out. Horst tells his family they are going to come together. Margaret says she wants to go to Paris, she stands up, Horst tells her to sit down, she walks away.

Jerrie and Mark knock on the door, there is no answer. A neighbor sees them and tells them Scarlett left with her boyfriend in a big rig. Mark shows him a photo of Ronald and the neighbor confirms it is him.

Wagy sees the three near the barrels, he calls Horst and tells him that he has a problem.

Scarlett and Phoebe are asleep, Arthur leaves the tent and leaves.

Gil sees the lights of a truck and tells Jenny and Cassie to run.

Arthur aka Ronald is digging a grave for Mary. We see him drag her body inside the grave and cover it with dirt. He looks up and Phoebe is there, she asks him what he is doing.