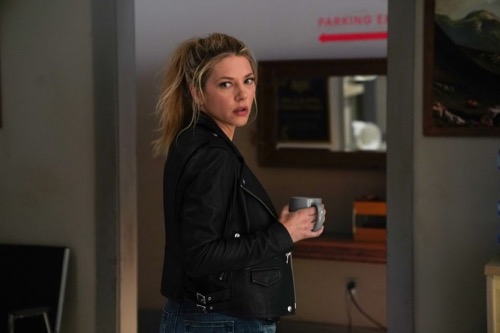 Tonight on ABC their new thriller by David E. Kelley, Big Sky airs with an all-new Thursday, October 7, 2021 episode and we have your Big Sky recap below.  In tonight’s Big Sky season 2 episode 2 ‘Huckleberry,’ as per the ABC synopsis, “Cassie takes on a missing person case brought in by a concerned girlfriend while Jenny continues to search for clues relating to the mysterious truck accident. As they check in with each other, the two eventually realize they are working on the same case.

However, they are not the only ones looking for answers as a new face comes to town hellbent on taking what she believes is rightfully hers. Meanwhile, Max, Harper, Madison, and Bridger are at odds over the stolen money.”

Tonight’s episode begins with the Rick Legarski look alike, he opens the door and says good morning to Ronald, he says his name is Wolfgang Legarski, his nickname is Wolf. He asks if Rick ever told him anything about him, Ronald says yes, he said he was weak. Ronald says Rick was his friend. Wolf says his brother had no friends, he used him. And now it is his mission to undo all the evil he unleashed in the world, and he starts with him, he is there to help him master those urges. Ronald wants to know where Scarlet is, Wolf, says seeing her is a privilege that he has not yet earned. He is the alpha and Ronald won’t get anything unless he gives it to him. He slides a plate of breakfast, Ronald says when he gets out of there he is going to kill him. Ronald picks up a piece of bacon and Wolf pokes him with a pole, he tells him to put the bacon down and ask for permission. Ronald puts it in his mouth, Wolf hits him with the pole, turns over the plate contents on the ground, and says “bad dog.”

Elsewhere, at the crash site, Jenny is there and she notices that the vin# on the truck has been scratched off. She finds some blood inside on the back seat, takes a sample of it.

Madison and Bridger are talking, he is worried that maybe somebody saw them at the crash site, people camp up there. She tells him that nobody saw them, he needs to relax and be cool for once in his life.

Mark drops by Dewell and Hoyt’s office to pick up Jerrie and take her fun shopping. Cassie asks him for a word first, she asks him if he found out anything on Dewey, he says no. She tells her that she is worried Dewell was working with Ronald, she doesn’t like that he had a photo of her and her son. She tells him to keep at it and if he has anything real to let her know.

Ren arrives in town and she wants explanations, she tells her associate, Donald, “just follow out money and see where it takes us.”

Madison texts Bridger, she is looking for him. He doesn’t answer her, but he is seen walking into the police station. He goes to the desk and says he is there to report a crime, he says he to sign in and grab a seat, they will get someone for him. Badger hears someone whistling, it is the same sound he heard at the crash site when the driver was shot – it is deputy Crowder.

Jenny is told that Badger is waiting to report a crime, she goes out to the reception area and he is gone.

Tonya walks into Dewell and Hoyt, she reports to Cassie that her boyfriend is missing, Big Sam, and she is worried that something bad happened to him.

Ronald tries to escape and Wolf stops him, he hits him to the ground and tells him that he is less than a dog and if he doesn’t want to be in the pack, he doesn’t deserve to live.

Ren and Donald are in a store, she tries on some clothes and tells him to try some on too. She buys some knives and some clothes, they leave.

Ronald sees Scarlett gardening and tries to run to her but Wolf won’t allow it. Wolf says she is a creature full of light, a fine woman.

Mark and Jerrie are out to dinner, she asks him why he asked her out, with no judgments. He says he wants to be there. Then he tells her that he needs her advice on how to get through to Cassie. Jerrie says it is not about him, Cassie has walls, high ones. Don’t try so hard, then maybe she will come to him.

Max, Harper, Madison, and Bridger meet and he tells them about the cop that was whistling, it is definitely the guy who shot the man at the crash site. In the dark distance, we see the same man watching them. Max tells them she had to use some of the money, just a little, her mom was in so much pain, she took two thousand and told her it was babysitting money. Max says she brought them two thousand each, just to make them even. Max tells them that they should throw the drugs in the river. Madison wants no more surprises.

Max and Harper are walking home, the man from the woods walks up to them and says he saw them, Max sprays him with pepper spray, calls him a creep and they both make a run for it.

Cassie messages Travis, he doesn’t answer, so she makes her way up to his room. She hears voices inside and finds Travis sitting on a bed, he is drinking a beer and kisses a woman.

Crowder meets up with Ren and Donald, she wants to know where the money and drugs are, he says he is handling things. She wants to know where Big Sam lives and says she’s got it from here.
Travis shows up at Jenny’s house, he tells her that he knows she showed up at the motel and she could have gotten him made. He says the woman is a front for the case he is working on.

Jerrie finds out the Big Sam had to flights booked to Cabo the night he vanished.

Cassie goes to see Tonya and asks her if she knew about the plane tickets, she says she was entirely sure. Renn is in the café, she turns around to Cassie and asks her where she can get her nails done in town. Renn and Donald are served by Tonya, Renn says they are friends of Sam and have questions for her.

Cassie shows Jenny a photo of Sam and says his girlfriend is looking for him. Cassie says his truck was run off the road, and there was blood in it but he is nowhere to be found.

Max arrives home, her mother and boyfriend T-Loc are sitting on the couch, he asks Max where she got the money. Later, Max tells Harper this is getting messy, Harper tries to reassure them that everything is going to be ok. Max says they have to tell Madison and Bridger everything. Max asks Harper if she can help dump the drugs, Harper wants to sell them. Harper says she works with this guy, they wouldn’t even have to do anything, they would just get a cut. Max is really worried, she says it is dangerous and they could get hurt. Harper tells her she is cute when she is scared, then she kisses her.

Cassie and Jenny are driving to go back to speak to Tonya, Jenny thinks she knows more than she is telling.

Max takes a sample of the drug, then she goes to unlock her bike and T-Loc catches her. He asks her what is in her hand, she says no. He manages to grab it out of her hand and asks her if it is an illegal substance.

Cassie and Jenny arrive at Tonya’s place and it is turned upside down. Then we see Tonya, with tape on her mouth and her hands tied, she is in the backseat of a truck that Renn is driving with Donald.