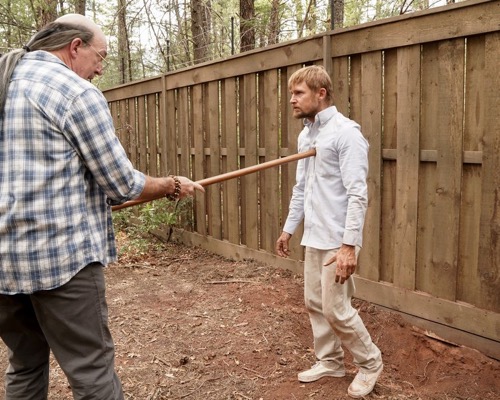 Tonight on ABC their new thriller by David E. Kelley, Big Sky airs with an all-new Thursday, October 14, 2021 episode and we have your Big Sky recap below.  In tonight’s Big Sky season 2 episode 3 ‘You Have To Play Along,’ as per the ABC synopsis, “After officially teaming up, Jenny and Cassie sit down with Tubb who reveals that this one goes far beyond their jurisdiction. Realizing Travis may be a man on the inside, Jenny reaches out for intel and learns the cartel is involved.

With Tonya still missing, Cassie and Jenny fear the worst and kick their search into high gear. Meanwhile, the kids’ plan continues to fall apart, with secrets and scheming threatening to land them in hot water.”

Tonight Big Sky episode begins with Ren, she is with Tonya and tells her that she needs to know where her boyfriend hid the money and the drugs. Tonya tells her that she is just a waitress. Tonya says she doesn’t know where anything is and she doesn’t know who is was working with. She didn’t ask because Sam didn’t like questions. Ren says he is dead and if she doesn’t answer Donald, her associate, is going to do what he does best. Donald finds a business card of Dewell and Hoyt’s office amongst Tonya’s posessions, she says she hired them to find Sam.

Cassie and Jenny are with Hoyt, He says he got a call from state, Sam was on their radar and they want to compare notes. They need to talk to his guy on the ground or they will shut them down.

Jenny and Cassie meet with Travis, he is the guy in the ground. Cassie doesn’t like the way he is talking to them. When he leaves, Cassie remembers that Travis was at the bar the under night. She asks Jenny if Mr. Undercover is good under the covers, Jenny smiles and Cassie says she will let this one slide.

Bridger bought a police scanner, he shows it to Madison and asks what she is going to buy with her two thousand dollars, she doesn’t know yet. Meanwhile, Max finds her mother’s boyfriend going through her personal things in her room. She gets frustrated with him and tells him fine, go through the stuff, she doesn’t care.

Tonya tells Donald that she needs to go to the bathroom, he pushes a garbage can towards her. He is doing a crossword puzzle and she gives him the answer, he tells her she earned herself a bathroom break. He unties her and takes her outside, she grans a piece of wood and stabs him in the leg and makes a run for it.

Wolf and his wife are talking, he says he has no progress Ronald. She tells him that Ronald only sees him as his captor, he needs to be his friend; they have to do everything they can before they put an animal down.

Max goes to see Harper at work, she tells her that T-Loc found the drug sample that she took out for her. Harper calms her down and tells her it will be fine. Dylan comes out of the restaurant, he is the one Harper was going to sell the drugs to.

Travis finds out that the cartel send someone and perhaps they have Tonya.

Cassie goes back to the office, she gets a call from Jenny, two bodies were found at Canyon Creek. Cassie tells Denise and Jerrie that she hopes one of the bodies are not Tonya.

Ronald is cleaned up, sitting at the table with Wolf, Scarlett and Wolf’s wife to share a meal. Ronald complains about the meal, he prefers to have cereal and Wolf tells him to give a list to Agatha and she will get some for him. Ronald refuses to eat, there are beats on the plate and he hates them. Agatha tells Scarlett to take Ronald to the barn.

Jenny and Cassie are at the scene of the two bodies, one is Sam, the other they don’t know. Bridger is nearby and so is Ren, she starts talking to him. She tells him that her first kill was a machete to the head. Bridger doesn’t know if she is joking, he grabs his bike and says goodbye.

Tonya is running, she is screaming for help and Donald is running after her. Meanwhile, Crowder goes to see Ren, she tells him she knows about the bodies that he got rid of and were found. He says he heard Tonya is missing, is there something she has to tell him. Ren says she only cares about the drugs and money, find her stuff.

At the farm, Ronald tells Scarlett that they need to get out of there. She tells him that at the farm they are protected from the men who are after him. She grabs him by the arms and tells him to give in, it will be easier for the two of them. He says he is not going to break, they are a family and he is going to do everything he can to protect them. She begs him to try. He tells her that he is getting Phoebe and they are getting out of there. He runs off, Scarlett stands there with tears rolling down her eyes and says outloud that she tried to warn him. Wolf walks up and tells her to go finish her lunch, he will take over from there.

They have identified the second body, Daniel Delcarpio, aka Ringo. Crowder walks in and he asks Cassie and Jenny if the two bodies were related to the crash the other day. They really don’t answer him, he smiles and says they know where to find him. Jenny asks him how he saw the wreck, it was far away from the road. Crowder say he drives through there every day. He tells them that he hopes work like this doesn’t stop them from chasing the monster Ronald Pergman. Jenny gets a text from Travis, he has some information.

Tonya is still running and Donald is following her. She sees a café, runs inside and begs for help. At the office, Denise gets a hysterical call from Tonya begging for help. Donald comes through the door, he kills a man in the kitchen with a bat then goes after Tonya and tells her that she shouldn’t have done that.

Jenny meets Travis, he says word is that the cartel sent a cleaner; that’s all he has right now. Cassie calls Jenny, tells her about the call from Tonya.

Ronald digs his way under the fence and finds Wolf on the other side. Wolf tells him he showed him the face of a friend and he acted like a little boy and now he gets a nap, Wolf hits him across the head with a stick and Ronald lands in the hole he dug.

Cassie and Jerrie are at the café, they call for Tonya and nobody answers, Jenny arrives.

Harper and Max are in the shed, they take the bags out of the hiding place, Harper says she is going to keep it at her place. Just then, T-Loc arrives back home only to find Max and Harper kissing inside the shed. He doesn’t know what to say, they shocked him, he walks away.

Ren is back, she finds Donald trying to get some of the fragments out of his leg and Tonya tied and gagged.

Crowder enquires in the station about the kid that came in to the station the other to report a crime and vanished. Madge gives him the kids name, Bridger Ryan.

Donald tells Ren that he killed someone because of Tonya, Ren says they now have a problem. They hear a truck outside, Donald says they have a bigger problem and Ren better take care of it or he will. Meanwhile the truck outside is Jerrie and Cassie.