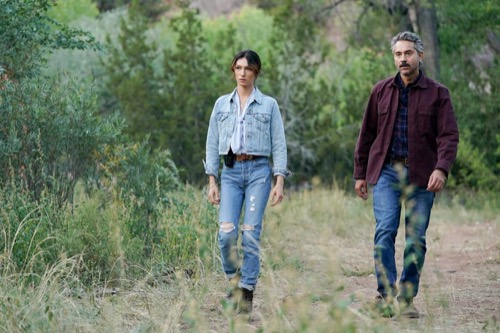 Tonight on ABC their new thriller by David E. Kelley, Big Sky airs with an all-new Thursday, October 21, 2021 episode and we have your Big Sky recap below.  In tonight’s Big Sky season 2 episode 4 ‘Gettin Right To It,’ as per the ABC synopsis,“Cassie and Jerrie search a development site and run into someone unexpected. Meanwhile, Wolf believes he is making progress with Ronald, and Deputy Harvey comes face-to face with Bridger.”

Tonight’s Big Sky episode begins with Harper, she notices a van parked outside her house, she goes out there and sprays pepper spray at the window and screams.

Cassie and Jerrie are at the location where Tonya is being held by Ren. Ren comes out of the house and acts innocent, asking what are they doing with guns. They say they are looking for a missing woman. All of a sudden, Cassie hears a noise and asks if they can take a look around, Ren says yes. They don’t find anything outside, Cassie asks if they can look in the trailer and Ren tells them to go ahead.

Inside, Tonya is not there, obviously, Ren’s associate did away with her. Jerrie tells Ren that maybe she shouldn’t be out there alone. Ren finds Donald and Tonya in a closet, she is passed out and he says she is not dead, he had to apply force when she bit him. All of a sudden, Tonya opens her eyes and screams.

At the farm, Ronald is trying to get the color off, Wolf tells him it is not going to come off, it is a special choke collar and if he builds a pyramid of trust, then it will come off. Ronald tells him not to threaten him. The collar tightens at the press of a button by Wolf who tells Ronald that he wants him to proceed. Wolf tells him that the Legarski name was tarnished and he wants to restore it.

Ronald tells him that his mother was religious they just need a rosary and can repent. Wolf says he is looking for a new Ronald. Whenever Ronald says something that Wolf doesn’t like, he tightens the color. Wolf says his mother was a doozy, she did love Rick though and he could do no wrong in his eyes. Ronald says his mother believed he had potential, but he fell short and didn’t reach that potential. She would give him this look and he could see it, the disappointment. He blames it on his urges.

Jenny is at the restaurant where Tonya tried to escape to and Renn killed the cook. Cassie and Jerrie show up, they tell her they met with a construction manager at a construction site, they searched and found nothing. Cassie tells Jenny in private, that she thinks she should speak to Travis in case he has any information about who the cartel sent.

Jenny heads on over to Travis’ motel, he has a cold beer waiting for her. She tells him that Tonya is still missing. He tells her that if someone from the cartel has her, she is dead. She says she escaped for a little bit, there is a chance that she can still be alive, and wants to know if he can help her.

Bridger is at home when he hears someone at the door. He goes to answer it and when he looks out the spy hole of the door he sees a man’s face that looks suspicious. It is actually deputy Harvey from the sheriff’s office. Once the deputy leaves Bridger goes outside to leave and the deputy is there and grabs him.

Harper tells Max about the van, they are going to tell Madison and Bridger after they try to sell the drugs. Max gets a text from Bridger that says they have a problem, they leave and take the drugs with them. Madison arrives home, she hears Bridger’s phone ringing, it is on the ground and he is not there.

Mark shows up at the office, Jerrie is alone and says they got three calls on a tip line. A land surveyor says that he saw someone that looked like Ronald near a cabin. Jerrie and Mark head out to the cabin to take a look.

Jenny tells Cassie that she spoke to Travis and he is going to check with Dietrich, a guy that runs the town to see if he knows anything about what happened to Tonya. Jenny asks Cassie if she is going to give Mark a chance, she says she is going to take things slow. Jenny gets a call and the two head out.

Travis goes to see Dietrich and says if he ever needs something done, like finding the shipment he didn’t get, he wants to be his man. Deitrich asks why he is staying at a motel, Travis says he is in-between places. Then, Deitrich asks if he is carrying and he says yes, he tells him to watch his back as Renn and Donald walk in.

Bridger is in the back seat of Harvey’s car and he says the woman he works for wants her stuff back and if she doesn’t get it, it won’t be good for him.

Ren tells Dietrich that his man stole from her father and she is going to find her stuff with or without him. He tells her that she is not going to like to see how things are going to go.

Cassie and Jenny are down by the water, they found a scrap of her clothing on a bush when she was running by it. Jenny says Travis thinks someone took Tonya because they think she knows something about the missing drugs and money.

Madison meets with Max and Harper, she tells them that something bad happened to Bridger and they need to find him now.

Wolf and Ronald are in the woods, Ronald asks if he can remove the collar. Wolf says he can have a bowl of cereal tonight and some time with Scarlett. Ronald goes to speak to Scarlett and tells her that she could get the remote from Wolf for the collar. She says that she believes that Wolf is trying to heal him and he makes the rules.

Jeffie and Mark approach the deserted cabin in the woods, Mark calls out to see if anyone is there and nobody answers. Mark says maybe it wasn’t worth the drive. Jerrie thinks he was there, he says it is like looking for a needle in a haystack. Mark then tells her that she has a great voice, she says that was another life. She takes his hand and tells him that she needs to see this through and she is glad that he is there to see it through with her, she kisses him and walks out of the cabin.

Bridger is tied up, Harvey offers him a cola then tells him he is going to do his worse if he doesn’t start telling the truth. Harvey grabs him by the collar and tells him that he thinks he did something that didn’t belong to him. Bridger gives him a name, Madison, his sister. Harvey calls Madison and tells her that she has something that does not belong to her and he has her brother, who he wants to trade. She has one hour and better not call anyone, or else.

Tonya walks into the office, Cassie is shocked to see her there. Jenny is there as well, she says deputy Harvey said he wanted to speak to her, then he hit her and messed up her nose. He picked her up for questioning and wouldn’t let her go. She escaped and went into the café for help, she feels bad that someone died. She goes on to say that Harvey said he killed Sam and would do the same to her.

Renn and Donald are driving, she tells him that Tonya is smart, she is going to point the finger at Harvey.

Madison, Max, and Harper have the bags.

Cassie and Jennie bring Tonya to see Tubb, he doesn’t believe Tonya, he tells the women that those are big accusations. He says like it or not Harvey is a cop and he needs more. Tubb orders Jenny to follow his lead and he walks away. Cassie turns to Jenny and says we’re not following his lead, Jenny says no.

Renn and Donald show up where Harvey is, she tells him that she will take care of Harvey herself and he wants him to make sure nobody comes down the road. Meanwhile, the girls are already there and hiding behind a tree. Max has a plan and Madison asks her if they are a special ops team. Max crawls around to the window of the house and lets Bridger know that she is there. Madison goes to the front door, she knocks and Harvey answers it. She tells him that if he wants the bags he is going to show her that her brother is ok. He pulls her inside the house. Then Renn shows up, she puts on gloves and takes out her gun. Cassie and Jenny are driving towards the house when shots are fired at them, it is Donald and he has a machine gun.