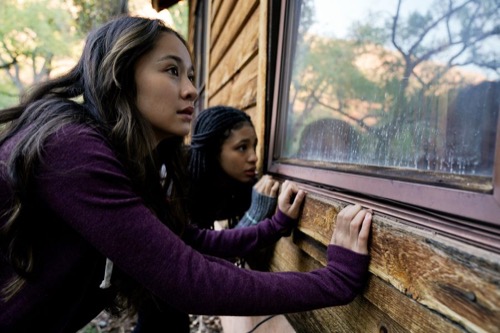 Tonight on ABC their new thriller by David E. Kelley, Big Sky airs with an all-new Thursday, November 11, 2021 episode and we have your Big Sky recap below.  In tonight’s Big Sky season 2 episode 5 ‘Mother Nuture,’ as per the ABC synopsis,“Cassie and Jenny struggle to dodge Donno’s attacks and the kids attempt to save Bridger as Ren is forced to figure out what happened to her plan.

Meanwhile, change is in the air when Ronald seemingly experiences a breakthrough and Jerrie receives an unwelcome visitor from her past. Later, Jenny’s unwillingness to drop a lead lands her in hot water with Travis and his not-so-forgiving bosses.”

The Big Sky episode begins with Badger, who is still tied up. Madison tells deputy Harvey that if he cuts her brother loose she will tell him where the money is. He won’t cut her loose, he tells her to show him where the money is, her life depends on it. Madison and Harvey head out of the house, when Max and Harper see them leave, they go to rescue Badger. Meanwhile, Jenny and Cassie are being shot at. Jenny calls for backup.

Inside the house, Badger tells Max where there is a knife to cut the tape and free him. All of a sudden, there is a knock at the door, it is Ren. She goes inside, her gun aimed, and looks around to see if anyone is there when she sees the knife on the floor with the duct tape. Meanwhile, Badger and Max are in the closet hiding. Ren calls Donno who is shooting at Jenny and Cassie, she tells him that something strange is going on and she needs him at the house, to handle his trouble and get there quickly.

Deputy Harvey tells Madison that he is tired of the nature walk, she tells him not much further. Ren then calls Harvey, she hears his cell phone ringing in the house, it is on the floor near the closet.

Jenny and Cassie are looking for Donno, they find some shell casings and take a sample. Mac and Badger hear Madison scream, then Madison kicks Harvey and makes a run for it. Ren and Doono are in the woods as well, they are wondering where the shots are coming from. Harvey shouts out loud that next time he won’t miss. Madison picks up a wooden stick, behind her is Harvey, then Harper has the bag of money in front of them and when Harvey tells her to drop the bag, Madison hits him with the stick and he stumbles, the man in the woods runs forward and jumps him. Harvey shoots him, the man stabs Harvey dead and tells them to run. Sirens are going off, Sherriff Tubb is there with his men. Ren and Donno find Harvey’s dead body, she tells him that works and it wasn’t their mess. Donno hears the sirens and tells her that they have to go.

Back at the station, Jenny doesn’t think Harvey was working alone. Inside his office, he tells her that she is starting to become a liability. She tells him that if Harvey was working for the cartel, Tonya and others are still in danger. He says if she is right the state investigators will find something, she has to stand down. Jenny leaves and calls Travis, telling him to call her back.

Cassie tells Jerrie that the more she thinks about it, she thinks something was off with Tonya. A man walks into the office, he is looking for Jerrie, it is her father.

Tonya goes back to the trailer, she tells Ren that she doesn’t want to leave town, what if she stayed to work for her. Tonya says she knows that she uses her profits from drugs to invest in legitimate businesses. People are distrusting outsiders and she needs a local to get them on her side. She made the police believe that Harvey was responsible for kidnapping her. She wants more for her life, not just a waitress pay. Renn says there is maybe something they can do.

Ronald and Wolf are having coffee, Ronald tells him that he is not going to let him hypnotize him. Ronald starts feeling funny, Wolf drugged him. he gets Ronald to lie down, he tells him to think about his mother, Ronald doesn’t want to. He says to picture his mother in this room, what she looks like and feels like. He thinks back to when he killed his mother and starts screaming stop. He says his mother was a hypocrite, she had her secrets too. Wolf asks him to tell him the secret, Ronald says she killed his father, she hated him and he saw everything. Wolf tells him he is a good boy and comforts a sobbing Ronald.

Badger, Madison, Max, and Harper meet and he says this needs to end now before anyone else gets hurt. Max says they need to return everything to that woman that was at Harvey’s house.

Cassie finds out that Tonya quit her job and she put her boss in quite a bind.

Max and Harper are out walking, Harper says the man who saved them didn’t look like a bad guy, they should try to find him. Max is afraid, she doesn’t want anything bad to happen to Harper.

Jerrie is sitting in the office staring into space, Mark asks her what is wrong. She tells him that her mom is dying, she found out today. They weren’t close, when she came out, everything changed and they haven’t spoken since she kicked her out. He asks her if she wants to see her mom again, she says yes and no. There is so much she wants to say, but when she was trapped in that cage by Ronald, she said if she had a second chance she would want to see her parents. But, why should she rush there after everything she put her through. Mark says he is slow when it comes to relationship dynamics, but he is an expert at not getting closure. She should go for herself, not for her mother so she can get closure because she won’t get it when her mother is gone.

Later that night, Ronald goes into Scarlet’s room. She asks him if he is making progress, he says he doesn’t buy it but he is doing his part. He tells her that they can escape, she doesn’t want to, she says she can’t look over her back for the rest of her life. She kisses him and asks him if he trusts her. Then she throws him on the bed and jumps on top of him.

Jenny and Cassie are together, they are looking over information on the case, Jenny tells her that Travis is pushing her out and she thinks she really likes him.

Its late, Max can’t sleep so she goes into the kitchen to talk to her mother. Max starts to cry, her mother says whatever it is, she can tell her. Max asks her not to tell anyone, not even T-Loc. Max spills the beans.

Cassie and Jenny are at the bar having tequila shots.

Wolf tells his wife that he had a breakthrough with Ronald, being forthright with his past will help him take ownership for his past. And, when he confesses the Legarski name will be wiped clean.

Mark helps Jerrie to pack, she gives him a book “Good dog, bad Dog,” by Wolf Legarski, she says it is pretty out there. He gives her a CD of music for the drive, they hug each other. She asks him if he thinks they could have ever been together He kisses her, she smiles. He tells her to call him when she gets there.

Wolf is dancing with his wife, then he dances with Scarlett, she tells him that Ronald is still talking about escaping.

Cassie and Jenny are in the bar when Jenny sees Dietrich and tells Cassie this is their chance to see who he is working with. They are found out by Dietrich and his men, Cassie manages to get a hold of one of their guns and pulls it on Dietrich who tells her this is not a good idea. All of a sudden, Trevor is there and he points his gun and Cassie, he tells Dietrich that she and Jenny are cops.