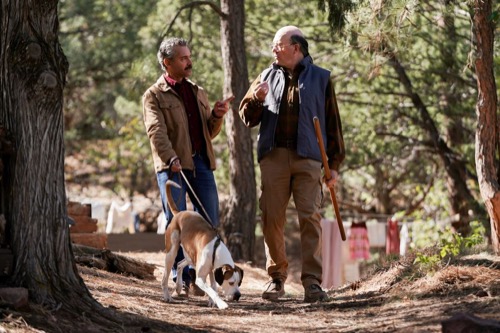 Tonight on ABC their new thriller by David E. Kelley, Big Sky airs with an all-new Thursday, November 18, 2021 episode and we have your Big Sky recap below.  In tonight’s Big Sky season 2 episode 6 ‘Heart-Shaped Charm,’ as per the ABC synopsis,“Cassie grows suspicious of Max after noticing her keychain matches one found nearby the crime scene and decides to confront her. Jenny and Travis get together to talk in secret, or so they think, as Smiley’s curiosity gets the best of him, and he follows Travis to the meetup.

Later, to his dismay, Travis comes face to face with Ren and Donno who are determined to get answers out of him; and Lindor pays Wolf a visit.”

Tonight Big Sky’s episode continues with Dietrich asking Jenny and Cassie why they are following him and Trevor giving them up and saying they are cops. Cassie tells Trevor to drop the gun and they will go. Dietrich tells Cassie to lower her fun, she does. Cassie and Jenny leave, one of his men says they should have taken care of them. Dietrich grabs him from the scruff of the neck and tells him there are security cameras, this is not the place to do it.

Harper sees a grey truck outside, she goes to speak to the man inside, he is the one who helped them. He tells her they should not have been there. She thanks him. He tells her they are not going to stop looking for her, she says she knows. Meanwhile, he is hurt, he has blood on his hand after he touches his side.

Cassie goes to see Max after she leaves her keys at her house, Max asks her about a keychain that is similar to one found at the crime scene. T-Loc comes to the door and introduces himself, he invites her in but Max says she has to run. Cassie says she will rain check and looks suspicious at T-Loc the way he looks at Max.

Harper tells Max that she lost her keychain, Max wonders if that is why Cassie had an interest in hers.

Mark is looking at a photo of Wold Legarski on his laptop, Denise looks at it and says creepy.

Travis meets up with Jenny, she is upset about what went down, he says it could have been a lot worse. He tells her that they need to cool down, they can’t crossover like last night, next time it could be bad news for both of them. Little does Travis know that Smiley followed him.

Max arrives home, T-Loc is at the table with his mother, she told him her secret. Max sits at the table, she tells her mother that she promised. T-Loc says he will give it to the police, anonymously. She tells him that she found a bag of drugs and little money, but she spent it all on her mother to repair her tooth. He tells her to bring the drugs to the house now, he will take care of everything. Max laughs.

Donno is preparing a meal for him and Ren, she is talking about her brother and how he doesn’t listen to her. He asks her what they are going to do about Dietrich, she says she has an idea that he might enjoy.

Mark and Cassie are at lunch, he asks her what she wants to pick her brain about. He shows her a photo of the keychain that was found near Harvey’s body and her babysitter has the same one. She knows Max, and she knows she is lying. Mark tells her that he has an address for Legarski’s brother, he is going to pay him a visit. She says every time he asked her out she should have said yes, until now, if he is cool with that.

Max tells her friends the plan, she says if she doesn’t do what T-Loc wants he is going to make her go to the cops. And, she didn’t tell him about the four of them. Max just wants this to be over. Harper tells her to give the drugs to T-Loc then they still have the money.

Trevor is getting a drink from a vending machine, Smiley sends him a text saying that he knows that he is sleeping with the cop. Trevor goes up to his room and inside is Donno, with a gun pointed at him.

Cassie sees Max walking down the street and stops her, she tells her they found a keychain on the scene of Harvey’s death, just like the one she has. Cassie tells her that if she knows anything, she can tell her. Max says she didn’t and walks away.

Jenny goes to see Cassie, she tells her that Trevor wants to cool things down. She knows he is right, but she likes him.

Cassie tells Jenny about the keychain, Jenny doesn’t think she was involved.

Max returns home with the bag, his mother tells her that T-Loc is risking himself for their safety. Max throws the bag on the kitchen table, he looks inside and sees the drugs, and smiles.

Ronald asks Scarlet where she went the night before, she tells him not to interrogate her. Just then, Mark pulls up in his truck with his dog. He makes sure his gun is loaded and puts it in the back of his pants. Wolf’s wife goes outside and tells the two to go with her. Wolf walks up to Mark and says hello friend. Wolf says he is there to get advice about his dog’s behavior. Mark says he is a roofer, Wolf doesn’t believe him. Wolf tells him that dogs are not the only animals he can read, this is about his brother and he knows it.

Max is sitting outside when Harper walks up to her, Max says her mom is an idiot for trusting T-Loc.

Jenny goes to Travis’ room and sees that he is not there and he left his gun, she knows something is wrong. Meanwhile, Donno has Travis tied and hanging from his hands and is beating him with Ren watching. Donno takes out a jagged long knife, Travis starts talking a bit more and Ren says she wants an address.

Jenny goes to see Dietrich, she tells him that she has an arrest warrant for Stone for pulling a gun on an officer.. Dietrich says he doesn’t know where he is and if he sees him, he will drive him down to the station himself.

Cassie is outside with her dad having a drink, he tells her that he would like to buy the ranch, she tells him it would be amazing.

T-Loc goes to see Smiley, he gives him a sample of the drugs. T-Loc says he has plenty more, he didn’t steal it, he can get it for him to give to his boss, or they can sell it themselves, nobody knows about it.

Mark tells Wolf the truth about who he is and he is looking for Ronald Pergman. His wife says her husband didn’t know what Rick was up to, he wished he could have helped him. Wolf says he will have some coffee.

Smiley leaves T-Loc a message, he says he is in. Then, Donno and Ren break down Smiley’s door. When Smiley almost overtakes Donno, Ren stabs him in the back with a kitchen knife. Dunno finds the drugs, Ren says Deitrich had their drugs the whole time and killed Harvey. It is time to show this guy who is boss.

Cassie goes to the cage where Harper works, she introduces herself. She notices the heart tattoo on Harper’s wrist.

Trevor is back in his place, Jenny arrives there and they get into an argument. She sees he is hurt and he won’t tell her what happened. She opens his shirt and sees the bruises and cuts. He says he is under the wing of the cartel now, they trust him and this is the only reason he is alive.

Mark thanks Wolf for his time, he gets in his truck with his dog to leave. A little up the road, Mark stops and looks at his dog and asks him what he thinks Wolf meant by saying he could have fixed Rick.

Harper is outside putting out the trash when she sees the van, she goes over to look inside and sees a boot, she opens the side door and sees that the man who helped them is lying down and he is hurt.

Jenny are Travis are sitting on the bed when Dietrich bangs on the door, Jenny jumps on the floor beside the bed to hide. Dietrich breaks down the door and tells Travis they are going for a ride, he takes Travis’ gun.

Mark goes back to the farm, gun aimed, and is sneaking around Wolf’s place.