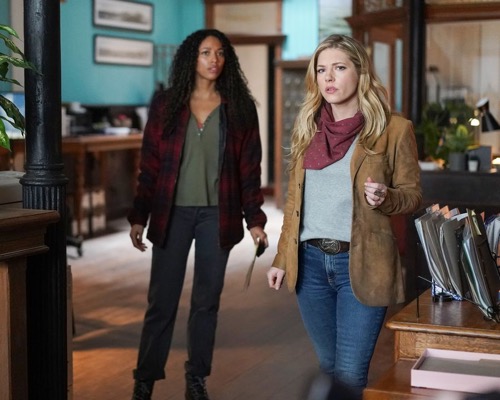 Tonight on ABC their new thriller by David E. Kelley, Big Sky airs with an all-new Tuesday, April 13, 2021 Spring premiere episode and we have your Big Sky recap below.  On tonight’s Big Sky season 1 episode 10 ‘Catastrophic Thinking,’ as per the ABC synopsis, “Three months after Ronald’s escape, Cassie and Jenny have officially partnered up to take down a fresh slew of troublemakers, but all isn’t coming up roses.”

In tonight’s episode of Big Sky, the episode begins with Cassie and Jenny in the car, Cassie is dazed out and sees Ronald come to the window, break the glass and strangle her. Jenny breaks her out of her trance, Cassie says the job is getting to her. Three months after Ronald’s escape, Cassie and Jenny have partnered up. Cassie says that last night her son asked her if he was safe, she can’t tell him yes because they let Ronald getaway and here they are working domestics. Jenny says she thinks about it too, Cody and the girls that they saved from Legarski and there is something to that.

They are parked outside of Hillcrest Motel and are taking pictures and watching some guys arrive at the motel to meet a man that is inside one of the rooms. The man inside gives them a briefcase and asks them how it looks, they grab the case and are about to leave. They try to take the case and leave, Jenny and Cassie burst in and pull their guns on them, Cassie says she called the cops and they have thirty seconds to leave before they are greeted by the party. The man with the briefcase runs into the bathroom and jumps out the window. Cassie and Jenny let the other two guys go.

The man with the briefcase’s name is Alan Headley, his wife hired the girls to watch him because of possible infidelity. Tubb is there, he tells them that he will try to track the pick up the two men arrived in, in the meantime, they need to know what is going on there, so when they speak to Alan’s wife Naomi, be easy on her.

Tad Jacobson, the superintendent gets a call from Horst Kleinsasser, he wants to speak to his son Blake. Tad says he passed the message on, his son doesn’t want to speak to him, he used his call to call a lawyer. Horst says he is coming down there.

Alan gets a text message, it says to sit tight, she is coming for him.

Cassie and Jenny go see Naomi and tell her that her son is not cheating, what they walked into looks like a deal gone bad. She says he has been sober for ten years, he wouldn’t be involved in drugs. They explain that the men he is involved in are really bad. She says Alan told her that he would do anything he can to protect their family.

Cassie and Jenny are in the office, Jerrie gets a call with someone heavy breathing, a blocked number and then they hung up. Denise then says she got a similar call the day before. Jenny gets a text from Naomi, Alan did show up at home last night.

At Naomi’s house, she tells Cassie that she feels helpless. Her father comes into the room and she introduces him to Cassie and Jenny. He asks to have a word with them outside, where he asks how much they are getting paid. He says his daughter can’t afford it and Alan isn’t missing, he called him an hour ago and said he will be home that night.

Alan is selling his collectibles, he finds buyers on Craig’s List and whatnot. He is not getting rich, but he is doing what he has to do and he knows Naomi would be upset that he sold them. Cassie asks why he wouldn’t come to him for a loan, he says pride. He tells them to send the bill to him and thanks to them for what they have done.

A guy walks into the office, his name is Mark Lindor, and he is a US Marshall about the Ronald Pergman case, he asks Cassie to go for a walk. She tells him that she has been calling the feds for months. He says the case is pretty cold, but he put in for a transfer just to work it. She tells him that she and Jenny are on the case, it is personal for both of them. Mark says Ronald will slip up; they always do. He tells her that they can skip the dance and work the case, he has an informant in the Canadian Security Intelligence Service. Cassie tells him the walk is over, it looks like he has a whole lot of nothing. He asks her if they got off on the wrong foot, he gives her his card and says they can get him together.

Jerrie tells Denise that Alan has made some weird purchases in the past month, karate lessons, a hot tub from Costco, vitamins. Denise tells her to keep refreshing the feed, he will have to use his card again. Jerrie gets another blocked call with the heavy breathing, she says it is him, Ronald.

Then we see Ronald, he is smashing a cell phone in the dirt.

Cassie and Jenny are back in the office, Denise tells them more weird calls. Jerrie says they are all the same, she thinks it is Ronald, it’s him.

Cassie goes to see Mark and tells him about the calls Jerrie is getting. If it is him, she may be able to recognize his voice. She wants to trace it, he reminds her that Ronald is smart. He says he will go back to his old ways, that is how they will find him. The key to Ronald is to understand his past, something triggered him, probably his past. Something he can’t stop, an action or pattern that he does without thinking.

Cassie sees a photo of one of the men from the motel, she asks Mark about him. His name is Cal Grove and he goes by “The Snail,” top gun for hire. She tells him about this electrical spear gun thing that he had, Mark says it is his signature. He the thorough time, if she is tangled up with him, she is going to need some help.

We then see Ronald, he has changed his appearance. His hair is long, he is wearing glasses, sitting at the dinner table with a woman, Scarlett, and a girl, Pheobe. The woman’s sister Mary stops by, she introduces him to “Arthur,” the name Ronald is going by. She joins them for supper. Arthur is in another room with Scarlett and he says he thought she wasn’t close to her family, she says she is not but her sister just dropped by to be snoopy, she is a gossip. Ronald goes into the bathroom and finds his taser gun, he presses it, grimaces in the mirror, then return to the dinner table. He tells her it is awful, he has been pinged to work, he does food delivery and he has to go.

Back in the motel, The Snail is dead and his partner finds Alan’s cell phone left behind.

Mark is in the car with Cassie and Jenny, they are talking about their relationship with Tubb. They arrive at the motel and are let into the room, inside they find a briefcase full of thoroughbred horse semen. The jars are worth over a hundred thousand but are ruined now. Jenny doubts that Alan is involved in this, it doesn’t make sense. They see some blood and a bed sheet missing.

Jenny is with Tubb they are doing some practice shooting, she updates him about Alan, they trailed him to the motel. He tells her that he doesn’t buy this PI business for her, she says it is a job.

Jerrie has Alan’s phone records, he was calling his father-in-law, they know he is in on this now. They head back to Naomi’s house, she answers and says she is a little busy, and it’s not a great time. Alan just got home. They know something is up, Jenny says ok, they will come back tomorrow. She closes the door, and they head around to the back of the house. In the house, The Snail’s partner has Naomi’s father tied to a chair, he has a gun and is demanding to know where Alan is. Then we see Alan, he has just arrived home, and in the back door, Jenny and Cassie have come into the house. The guy is shot, Jenny tells Cassie to call it in.

Naomi’s father says he wasn’t involved, Tubb knows he was involved. Tubb tells him to get himself a good attorney, and in the meantime, go be with his daughter. Tubb tells them good work, he looks at Jenny and says remember what we talked about.

The next morning, the phone rings in the office, it is a blocked number. Jerrie puts it on speaker, it is Blake Kleinsasser and he says hi to Jenny, he says he wishes it was under better circumstances and he needs her help. Outside the office we see Ronald, he is in a car and looking through the office window from his car