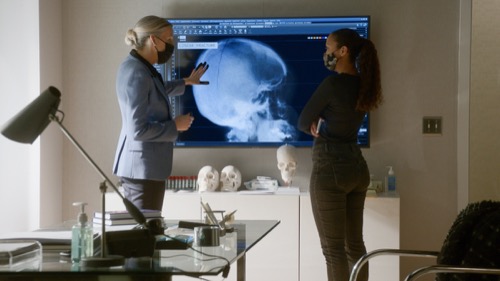 Tonight on CBS their drama Bull inspired by Dr. Phil McGraw airs with an all-new March 15, 2021, episode and we have your Bull recap below.  On tonight’s Bull season 5 episode 10 called, “The Boy Who Cried Murder,” as per the CBS synopsis, “Izzy asks Bull to petition the court to have her best friend’s body exhumed when the woman’s son alleges she was murdered, despite her death already ruled accidental.”

In tonight’s Bull episode, Isabella Colón’s best friend died. She’s known Maryam for years. They knew each other before either of them was married and so Izzy went to the funeral. She went to the funeral in spite of the health risks. She even hugged both the widower and his sons. Izzy wanted them to understand that she was thinking of them. She loved those boys just as much as she loved their mother. She also wanted them to know how much their mother meant to her.

However, Maryam’s son had wanted a word with her. He wanted to speak alone to her because Taj suspected his mother’s death wasn’t an accident and so he told her his theory. His mother allegedly died after trying to change a light bulb. She slipped and fell and cracked her head on the marble. This was the official story and it was odd to Taj because his mother never changes lightbulbs.

Maryam usually left such tasks to her husband. Maryam was also wealthy. Her parents both died when she was young and she inherited a fortune. The money that the family lives on now is hers. Maryam told Izzy before she died that she suspected her husband was having an affair. Maryam would have divorced him if she found out it was true and he would have lost everything. Also, there was the earring.

Maryam visited her son Taj earlier the day she died and she was wearing earrings. Taj later found an earring in his parents’ upstairs bathroom and that too didn’t make sense because his father Jai claimed Maryam never went upstairs the night she died. Taj found one of his mother’s earrings upstairs in the room. It was under the radiator and the Persian rug in the room was also missing.

Something happened in that room. Taj believes his father murdered his mother. He also knows people won’t listen to him because of his previous drug use. He was the family screw-up. He needed Izzy because he wants her help in reopening the investigation into his mother’s death. Taj doesn’t think it was an accident like his father was claiming and the medical examiner ruled it an accidental death after only forty minutes. It was a rushed autopsy.

This gave Taj the excuse he needed to reopen his mother’s case and so Bull’s team was helping him prove his theory. Benny argued his side in court. It was enough to get his mother exhumed and so next came the harder part. They had to prove Maryam’s death wasn’t an accident.

The team ordered a second autopsy. This new autopsy found that Maryam had been hit over the head with a rounded object and therefore couldn’t have died by her head hitting the ground. The ground was a flat service. It wouldn’t have left the same impressions in her skull and the evidence continued to pile on from there.

Jai was having an affair. He was a college professor and he was having an affair with another professor at the university. Her name is Linda Campbell. She was also there the night Maryam died because both Maryam and Jai turned off their alarm with their fingerprint access, but someone used a passcode to get in and out. The passcode user must have been Linda.

Linda and Jay were using what little time they had together to have sex. They didn’t know his wife was coming home and so she surprised them. She probably surprised them in the bedroom. There were two statue figurines in the bedroom and one of them had recently been cleaned with bleach. It didn’t make sense why someone will clean art with bleach. The figurines also matched the wounds to Maryam’s head. One of them (the one covered in bleach) was used to kill her and so Taj had been right. His father murdered his mother and then covered it up. Taj’s brother didn’t believe him when he tried to tell him the truth and he doesn’t believe the report now. Arin thinks Taj is confused because Taj is back on drugs.

Arin and their father Jai have had Taj followed. They have footage of him buying drugs in a park after his mom died and so Taj later had to explain that in court. He told the jury that he bought drugs because he was feeling depressed. He then went home and he thought of his mother and how disappointed she would be. Taj claims that he flushed the drugs down the toilet. He was still technically clean and he has been clean for seven months.

Taj’s father and brother ripped his character to shreds on the stand because they wanted everyone to know that Taj’s suspicions were unfounded. Only Benny came back by putting the mistress on the stand. He asked Linda where she was the night Maryam died and Linda said she was at a hospital two hours away.

Linda can prove that she was in the hospital. She also went straight home afterward and there security footage in her apartment building that can prove she didn’t have time to stop at the Malani house. So, if it wasn’t her that used the passcode, who did? The team went digging through Jai Malani’s phone records and he cried to everyone the night his wife died. The only one he didn’t call was his son Arin. Arin’s mother had just died and his father didn’t call him. This must mean Arin already knew his mother was dead. The team did some research on Arin. Arin has started over three businesses that his mother has funded and two of them failed and his current one was having money troubles.

Arin had needed a hundred thousand dollars in a hurry. Benny theorized in court that Arin must have gone to his parents’ brownstone to ask them for the money and he had receipts to back up his theory. Arin dropped off his car two blocks from his parents’ home.

He walked the rest of the way and he tried to get his hands on the figurines. They were willed by his grandfather to him on the day he married. Arin wasn’t married now, but he couldn’t wait anymore because just selling one of the statues would be enough to get him out of debt and so he was holding one of the statues when his mother told him what would be the point. His mother said he was just sinking money into another failed business.

Arin and Maryam argued. She turned away from him and he snapped. He hit her over the head with the figurine. Arin killed his mother. His father then tried to cover for him and they would have gotten away with it if it hadn’t been for Taj. If Taj hadn’t opened an investigation into his mother’s death, Taj and his brother and even their father Jai would all be together.

Now, Arin was going to jail and Taj will be left alone.