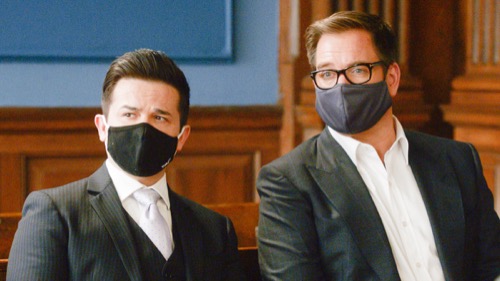 Tonight on CBS their drama Bull inspired by Dr. Phil McGraw airs with an all-new April 19, 2021, episode and we have your Bull recap below.  On tonight’s Bull season 5 episode 12 called, “Evidence To The Contrary,” as per the CBS synopsis, “Bull and the TAC team worry about jury bias when Bull mounts a murder trial defense for a Black Lives Matter activist who is also the son of the wrongly convicted man who inspired Bull to start his trial science company.”

In tonight’s Bull episode, Arthur Craddick was finally released from prison. He was expecting to be picked up by his son Leo and the two planned on grabbing a pizza from the first place they saw. However, Leo was unable to meet his father. Leo was arrested for the murder of Detective Joseph Kaminsky and now he was the one in jail.

Leo was being represented by Bull and his firm. They later met with Leo at the prison and they told him not to worry about his father because his father was being picked up as they spoke. Bull and Chunk also tried to get Leo to focus on his defense. Leo held a serious grudge against the detective and his fingerprints were found on the detective’s car. It also didn’t help that someone matching Leo’s description was seen running away from the scene.

The evidence all points to Leo. Leo was angry with the detective because the detective was the one who put his father behind bars for twelve years and Leo was known for supporting BLM. Otherwise known as Black Lives Matter. Black Lives Matter has become a political movement and they believe in stopping the violence against black lives, but the prosecution in Leo’s case wanted to use his past with BLM to justify the claim he was anti-police.

Chunk asked the judge to prevent the ADA from bringing up BLM. The judge agreed to that. She also struck down Chunk’s other idea of preventing the ADA from bringing up Leo’s past convictions. He was arrested at a BLM protest. He spent a night in jail and, so if he takes the stand, it was only fair the prosecution gets to ask him about his criminal history.

The judge gave and took away at the same time. Her motion prevented Leo from taking the stand in his own defense and unfortunately, he doesn’t have a great alibi. He claims he was home alone on the night of the murder. He was apparently asleep as Detective Kaminsky was murdered. He also said he never went near the detective’s car and that his fingerprints must have been planted.

Both Chunk and Bull realized that their defense will have to come down to the people they put on the jury. They eliminated people who were black and white about life and they looked for people who embraced the gray. Chunk ended up eliminating three jurors because they didn’t fit his mold. They were also all white and so ADA Olson accused Chunk of discriminating against white people.

Olson made her case before the judge. She demanded that white people be allowed to join the jury and so the one person that neither Chunk nor Bull wanted on their jury was now a part of their jury. Olson also later put Kaminsky’s wife on the stand. The wife picked up Kaminsky from work and she remembers seeing Leo while she was waiting. He asked her if she was in Kaminsky’s spot. She said it was and then she went into the precinct to tell the watch commander about it.

Kaminsky’s wife had been worried about Leo. She thought he was looking for her husband to hurt him and not long after that, her husband was murdered. Leo claims that he was there because he wanted to apologize for his earlier words to the detective. And he might have touched the car while he was there.

This could explain his fingerprint at the crime scene. If he touched the car days before, the prosecutor couldn’t use that as evidence Leo was there at the night of the murder. Olson was a great prosecutor. She knows how to push people’s buttons and she did that several times in the court. She made it seem like Leo had to testify.

Olson wants him to testify so that she could bring up BLM and call him anti-police. Bull and Chunk saw right through her actions. They did their best to downplay what she was saying and they still kept Leo from the stand. The next few days brought up a surprise witness. Olson found someone who lived in the same building as Leo and this Ahmaud Coleman testified that Leo was asking around for a gun.

Leo explained himself to Chunk. He said he was thinking of buying a gun because there were a lot of break-ins in his building. Leo never went ahead with buying the gun and he never mentioned the detective. Chunk crossed examined, Ahmad. He ripped his story apart and he showed that Leo never actually bought the gun. But it still didn’t look good. Leo was stalking the victim. He was considering buying a gun. He was also still angry about his father. The prosecution is claiming he killed the detective in revenge. Chunk couldn’t put Leo on the stand. So, he put Arthur on the stand. Arthur claimed Leo couldn’t have killed Kaminsky because he himself paid someone twenty grand to kill the detective.

Arthur broke his parole by lying on the stand. Chunk and Benny both asked for a break while they talk to Arthur and so they later told Arthur that he violated the terms of his parole. He perjured himself. It can be proven he perjured himself and that will hurt Leo’s case. Everyone will think his father did that to create reasonable doubt. Which is why he did it. Arthur would rather go back to jail than see his son imprisoned and so the team did their best to keep both men out of prison.

They found out that Kaminsky was dirty. He was a part of a shakedown operation and he and his friends (other dirty cops) had recently robbed a bodega owner who was also a drug dealer on the side. Kaminsky was threatening to turn on his partners. They texted him that night that they were going to kill him and then eventually someone killed him.

Kaminsky was killed by dirty cops. Bull and Chunk handed over the evidence to ADA Olson and it was now up to her to decide whether or not she was still going to go after Leo. Arthur in the meantime was going to be okay. His sentence was vacated and the judge had even apologized to him for the twelve years he was falsely imprisoned. Arthur later got to attend Leo’s trial as a free man, but things got better from there. Olson dismissed all charges against Leo and so now he gets to go home with his father after twelve years apart.

And the juror that Bull didn’t want to be included, later asked her why she looked upset and she told him that she had been so sure Leo was guilty. And now she was learning she was wrong.