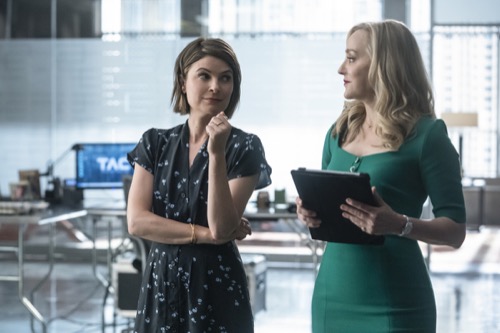 Tonight on CBS their drama Bull inspired by Dr. Phil McGraw airs with an all-new October 14, 2021, premiere episode and we have your Bull recap below.  On tonight’s Bull season 6 episode 2 called, “Espionage,” as per the CBS synopsis, “A client is on trial for going public with classified government documents; Bull experiences emotional turmoil following his daughter’s kidnapping.”

In tonight’s Bull episode, the feds raided Jerry McDonnell’s apartment. His friend Kelsey turned out to be an FBI Agent and she had been spying him. She’s been collecting evidence. She must have found all the proof the feeds needed because Jerry was arrested. Jerry was apparently arrested under the Espionage ACT. He was being accuse of spying on his country because he collected the movement of nuclear material and printed it online.

He didn’t accept any money for it. He did it because the nuclear plant was near his community and he noticed people were getting sick. He wanted to warn them. He collected information and printed it in order to keep his community safe. And for that, he’s facing thirty years.

The Espionage Act guarantees thirty years in prison for everyone found guilty of it. But Jerry wasn’t a terrorist and he wasn’t a traitor to his country. He was just an average citizen trying to warn people about the harmful effects this nuclear plant was having on the people nearby. Jerry didn’t deserve thirty years in prison and yet it was going to be impossible to defend him because people will naturally shy away once they hear the word “espionage”.

Chunk was assigned this case and Bull decided to follow him. Bull had almost gone through a recent tragedy. His daughter was kidnapped and both he and her were almost killed by a mad woman. Bull got his daughter back. And the woman was arrested.

They were all going to work together to get Jerry out of the thirty year sentence. The first step in doing was jury selection and so they chose people that were naturally suspicious of the government. They even tricked the AUSA into agreeing to someone but the AUSA had an entire Justice Department working behind him and he found out the juror was anti-government by finding some obscure posts of hers.

Bull later yelled at Taylor for not finding the same posts. Taylor got upset because the Justice Department has better resources and computers than she does. She was also hurt because deep down she felt the same. Taylor has been secretly seeing her ex-husband and so she got his advice and he told her what she was really upset about.

They also talked about where their relationship was going. He thought they working towards something and she agreed to see where it goes. Taylor later returned to work and she and the others noticed that Bull has been snapping at everyone. Bull isn’t okay. He’s suffering from PTSD and he isn’t on his game.

Bull cam up with the idea that Jerry should confess. He wanted to put Jerry on the stand and have him confess to the crime. Bull thought if Jerry revealed why he did what he did that maybe the jury would sympathize with him. It was a huge risk and the rest of Bull’s team felt unsure about it.

They thought it would too large of a gamble because it wasn’t their lives. It was Jerry’s. The team went ahead with Bull’s plan and it was working until Bull lost it in court and potentially blew up the whole case. Chunk later took him to task for it. Bull realized the mistake he made and he went home. He was finally ready to stop pretending he was okay. He was a mess. He revealed to his wife Isabel that he was mess and that he had been mean to people.

Bull only tagged along on the case because he met AUSA Carto and he thought he was a jerk. He decided to take the case then because he wanted to show him up. Bull now realizes that wasn’t the best way to handle a case or someone’s life. Bull was apologizing to Danny for snapping at her earlier when she revealed. AUSA Carto was known to wiretap people. He did so without warrants and that’s why he got kicked out of the FBI.

The team tricked Carto into wiretapping their offices and, in exchange for not turning him in for illegal wiretapping, Carto agreed to a plea agreement in which Jerry would serve no jail time. Jerry was deliriously happy when he learned about the deal. He was a free man now and so Bull had made it up to him for almost losing the case.

Bull returned home. He’s still struggling with his mental health but he’ll get better with time and the team is willing to give him that time.

But Taylor realizes she’s still the person she’s always been and so she ended things with her ex because she didn’t want to confuse their son any further.