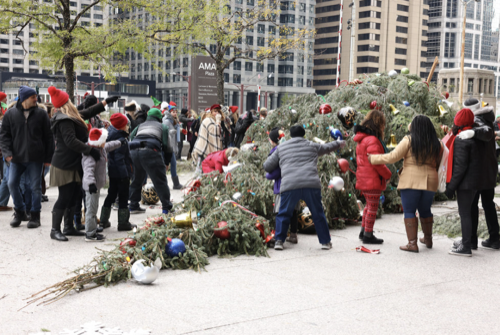 Tonight on NBC Chicago Fire returns with an all-new Wednesday, December 8, 2021, season 10 episode 9 called, “Winterfest,” and we have your Chicago Fire recap below. On tonight’s Chicago Fire season 10 episode 8 as per the NBC synopsis, “Gallo, Violet and Ritter debut their microbrewery business at Winterfest; Brett prepares to present her paramedicine programme to an oversight panel; Firehouse 51 gets in the holiday spirit.”

Tonight’s Chicago Fire season 10 episode 9 looks like it is going to be great and you won’t want to miss it.   While you’re waiting for our recap make sure to check out all our Chicago Fire recaps, news, spoilers & more, right here!

In tonight’s Chicago Fire episode, Severide is of two minds about Kidd. He loves her. He believes she loves him too. But she’s been gone for a while now and he’s not sure if there’s a future for them or if she might come back at all. Severide was still thinking about it when they got a call. The station was called to Park Plaza where they hold their big Christmas tree and it turns out the tree fell. He was standing up right and being beautiful and then it just fell out of the blue. Right onto a several people.

The poor people were still trapped under the tree when the fire department was sent to respond. Severide has seen a lot on a job. He’s just never seen anything like that and so some would have found it humorous. The professionals on the other hand worked on getting everyone out in one piece. And they to do so they had to start cutting away at the tree.

They started to cut the whole thing. They were taking off trunks of it as they were helping people escape and unfortunately one man couldn’t escape on his own. His name is Hugh. He was actually impaled by one of the branches and so he was rushed to the hospital. He didn’t go alone. His wife went with him and Hugh’s impalement stayed with Mouch. Normally, he could shake off the job. This time he couldn’t do so and that’s why he turned to his best friend Hermann.

Hermann said the people they helped used to stay with him in his mind. It was hard to shake it off and he wasn’t entirely sure if he wanted to. He said the best thing he found he could do was to keep doing the job. Keep putting everyone they help first. Until there was a next one and a next one.

Brett meanwhile was focused on her Paramedicine program. She had the backing of Chief Hawkins and she knows that’s in large part because it’s a great program and its because Violet is attached to the program. Hawkins has a thing for Violet. Brett noticed it and she tried to bring it to Violet’s attention.

She told her friend how worried Hawkins was when Violet had her appendix out. How he made sure that Violet got one of the best rooms that great insurance could buy. Violet didn’t notice these things on her own because she was focused on the brewery with her friends and how they had to market their beer at the Winter festival. And then there was the fact that Violet also failed to notice how Gallo has a thing for her.

Gallo even turned down someone else because he had feeling for Violet. He ended his thing with Cara. She was helping him and his friends with their company. But he still risked that because he doesn’t feel for her what he should feel. He was going to confess at the Winter Festival to Violet and then they won for best beer and were slammed with customers. They had to wait until they got back to the station. Gallo wanted to come forward then and there was always something in the way. This time Hawkins came back with bad news. His family friend who’s on the board listening to Brett’s pitch had suffered a death in the family and so she couldn’t make the meeting. She has to travel to Texas to bury a loved one.

Sad and also inconvenient. Brett and Violet also got called to a scene who was choking on a Christmas ornament and they had to use the Heimlich maneuver to get the ornament out without breaking or had anyone swallowing the glass. The two women save the guy’s life. They went from there to making a pitch for the program and Violet was supporting Brett while Gallo was being told that Mr. DeWitt will no longer interested in supporting their brand and so now the guys have to find a new place to brew their beer. Gallo was also one step too short in admitting his feelings to Violet because she finally picked up on the signals Hawkins was giving. And she’s letting it be known that
She’s interested.

Severide meanwhile tried to get into contact with Kidd. She was so hung up on expanding the Girls On Fire program that she wasn’t even worried about having a job when she comes back and so Boden asked her to make a decision by the next shift or else he’ll have to make permanent changes. Boden didn’t hear from her and so Pelham was officially offered the job to stay at the firehouse. And once the job was off the table, that’s when Stella Kidd showed up.

She showed up with her bags at Severide and there’s no telling what will happen next.