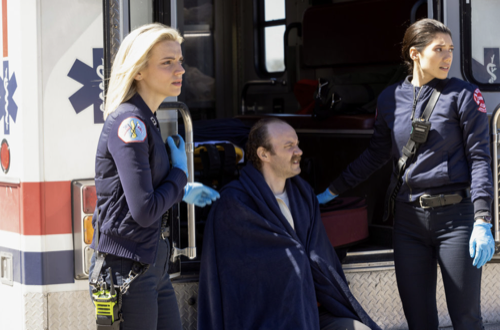 Tonight’s Chicago Fire season 9 episode 16 looks like it is going to be great and you won’t want to miss it.   While you’re waiting for our recap make sure to check out all our Chicago Fire recaps, news, spoilers & more, right here!

In tonight’s Chicago Fire finale, the episode begins with Casey, he is looking down at his watch when Severide approaches him, it’s his uncle’s Rolex – his uncle carried it around for fifty years, he was lonely his whole life, it is like he was just sitting around waiting to die.

He feels like he is sending him a message, don’t sit around like he did, live. He tells Severide he told Brett how he feels and nothing, he thinks he gave her a lot to think about. Severide tells him that he proposed to Kidd and she said yes. She walks in and laughingly says she couldn’t say no, it would crush Severide.

Mouch and Herrmann are walking into the station, Herrmann says he was thinking about the medal he got, maybe they should have a medal night. Mouch tells him that he only thinks about bringing in business.

Time for briefing, Severide has spring cleaning assignments for everyone, then he surprises everyone by saying that Kidd is his fiancé. Brett walks in a congratulates Kidd. The siren goes off.

They arrive at the scene of a motorcycle accident, a bird flew into the bike. The driver looks in bad condition, everyone helps to get the bike off the driver as Brett and Violet pull the guy out. Brett seems distracted, Casey brings her back and tells her to concentrate. Brett goes in his mouth and takes out two broken teeth. They put a collar around his neck and get him on a stretcher.

Back at the station, Chief Boden has some news, he tells Mouch and Herrmann that he would like to get their take on it. Commissioner Hill has reached out to him, and she said he moved on to her radar, she would like to know if he would accept being considered for a deputy chief role.

Herrmann says it is great, Mouch says he doesn’t look excited. Herrmann tells him to think about it, he would miss him, but they need him as high ranking as possible. Mouch says a lot of the white shirts are not firefighters. Herrmann and Mouch give their support.

Casey is in his office, he is thinking when Ritter passes by, he asks him if Brett and Violet are back, but they are not.

Severide goes in to see Casey who says he is getting the message from Brett loud and clear, he is done and backing off completely. Severide says that he wants him to be his best man. Casey says he will be honored. Severide says he wants one hell of a bachelor party, he wants to end up on the rooftop with Mike Tyson’s tiger. They both laugh.

In the kitchen, Gallo is making homemade pizza. Violet walks in and he mentions the other night when she kissed him, he says he thinks maybe they should go on a date soon and see where it goes. She says she was thinking of that too until she found out that he dated the last paramedic that was there. So that is his type, whatever paramedic he happens to be working with. Ritter overhears and thinks awkwardly. Violet turns him down.

Ritter goes to see Violet, he tells her that he wants to back up Gallo, he and Mackey were not really a thing. Violet says that Gallo looks like a player. Ritter says they can all be friends and hang out.

Kidd goes to see Boden, he tells her double congratulations. He tells her that he is so proud of her. She says thank you to him, and he means everything to her.

Casey and Brett come face to face in the hallway, the siren goes off and Brett leaves without them saying anything. On the scene, a man named Pat fell and he is bleeding. They enter the house, Pat walks up and says he doesn’t need an ambulance, he has his arm bandaged, then he passes out.

Kidd tells Severide she loves this house, when she gets her placement she doesn’t know how she will love another house like this one. He tells her she will plant it and it will grow. She tells him that he is wonderful, he says he loves her.

Casey is in his office, it is late, 1 am, Brett is asleep in the house. Boden is awake as well, he is in his office looking at a photo of his family. He gets up and looks at old photos of firefighters from the house. Casey goes outside for a walk, Brett goes outside and tells him that they belong with each other. He says we do. She says they are right for each other, he says they are. She says when you know, you know. She tells him that she is in love with him, he runs to her and kisses her.

At Molly’s bar, Ritter tells Gallo and Violet that they need a side hustle.

Cruz tells the team that Chloe’s baby shower is going along as planned. Kidd notices that Brett and Casey are missing. We then see Brett and Casey, they have some wine and a romantic evening together.

The next day, Boden is leaving the house when a man and a son walk up, they moved in a few weeks ago. He asks Boden if he is a fire chief, his son Ezra watched fire fighter videos all day long, he wants to be a firefighter. Boden offers to have him drop by the firehouse, they will give him the full tour. The father says it is nice to have neighbors that his son can look up to.

At the fire house, Boden arrives and wants to speak to Hill right away.

Capp’s girlfriend shows up at the station, the men are floored when they see how pretty she is. The siren goes off, no time to get to know each other. They arrive on the scene, the boat exploded, one man has swum to shore and he is ok. He tells Severide that there is another man still inside the boat. They get on their diving gear and get inside the boat underwater. 61 arrives and both Brett and Violet are on the scene, the man says the divers have been out there a long time. Severide, Capp, Cruz are in the boat. Severide hears a knocking sound, there is a survivor.

They find the man who was trapped, he is still alive. Mouch, Kidd, Casey, and Gallo arrive on the scene; they heard the call on the radio when they were out. All of a sudden, the boat starts to sink a little more and the exit is blocked. They have been in the water for 22 minutes and can’t get out of the boat. The survivor asks how much time they have before their air runs out, nobody answers. The boat is sinking, there is no more room to breathe and they are going under.