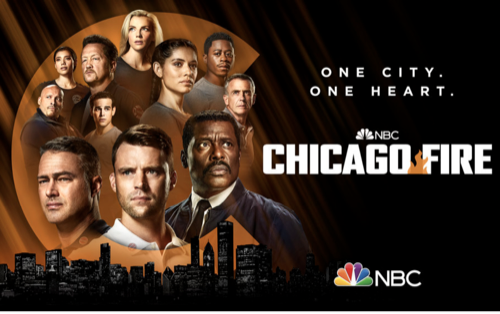 Tonight on NBC Chicago Fire returns with an all-new Wednesday, September 26, 2021, season 10 episode 1 called, “Mayday,” and we have your Chicago Fire recap below. On tonight’s Chicago Fire season 9 episode 15 as per the NBC synopsis, “Firehouse 51 deals with the aftermath of the capsized boat rescue; Gallo, Ritter, and Violet discuss plans for a side gig.”

Chicago Fire Season 10 premiere begins tonight with the crew watches as several of their crew members are under a sinking boat. Matthew Casey (Jesse Spencer) looks anxiously at Stella Kidd (Miranda Rae Mayo). Sylvie Brett (Kara Killmer) revealing that everyone is inside the boat. Everyone on shore watches helplessly as they realize the boat has hit the bottom and there is no sign of the divers. Meanwhile, inside the boat, Kelly Severide (Taylor Kinney) instructs everyone with him to drop their tanks and anything secure around their waists to the bottom as they are 30 feet below the surface, and look for a way out.

Casey demands the Zodiac to come back to him. Randall McHolland “Mouch” (Christian Stolte) and Blake Gallo (Alberto Rosende) help him look for anything the diving team may have left behind on the rigs. Stella attempts to board the boat with Matt but he orders her to remain ashore; when he sees her face he says he will bring him back. Meanwhile, one of the men in the boat under the water, blow something up and was able to create an opening for them to swim to the surface, everyone anxiously awaits above, but Joe Cruz (Joe Minoso) is simply floating with eyes wide open.

Casey scours the waters, everyone beginning to point out the divers; no one sees Cruz. Four divers are up and there is a time of panic when Severide brings Cruz to the side of the boat and CPR is being used. Stella pleads for some answers and after a few minutes Joe throws up some water and there is a huge sigh of relief from everyone. The crew surrounds him at the hospital as Dr. Crockett Marcel says all he needs is a little rest. A very pregnant Chloe Cruz (Kristen Gutoskie) comes in and is thrilled to see him okay, even when he apologizes for ruining the baby shower.

Matt and Brett celebrate at home, kissing and enjoying some alone time. Stella and Severide spend some private time together. He tells her to stop staring as it is getting weird and he hates the silence as the game is going to be on soon. She scoffs at how weird their wedding would have been having him drowned on their wedding day. He grabs the remote but she has another way to convince them he is alive and begins to kiss him, saying if she kisses every part of him then her brain can tell her heart that he is really all there, OR does he really want to watch the game? He throws the remote.

Chief Wallace Boden (Eamonn Walker) goes to meet with Gloria Hull, Deputy Fire Commissioner, who informs him there has been a decision about the position.

Cruz returns to the firehouse and pauses in front of the memorial dedicated to Otis, He scoffs at the job Mouch is doing and it is like he isn’t even there. Stella asks Mouch to hand him the rope bag and Cruz asks if this is the welcome he gets after begin gone for 2 weeks? They joke about how cold it got, acting like he’s a spirit and shouldn’t go into the light, but Matt squashes their joke and welcomes him back along with Severide.

In the dining area, Gallo sits down with Christopher Herrmann (David Eigenberg), Violet Mikami (Hanako Greensmith), and Ritter (Daniel Kyri) who hands him his running tab at Molly’s. They discuss new business opportunities.

Severide tells the crew that Boden wants an up to date list on their equipment, but when he walks away Joe learns that Severide got into trouble for helping him as he Kelly pushed himself way past his limits, saying he was either going to come up with Joe or not at all. Joe pauses and looks at Severide.

Meanwhile, in Boden’s office, he pauses and takes a deep breath. He receives a message saying the press release is going out and he is free to make an announcement. Chief Boden walks into the dining area and announces that he is getting a promotion to Deputy District Chief and everyone celebrates, hugging him. Stella asks if he won’t be working out of 51 anymore. He admits that is true but they will see plenty of him still. Suddenly a call comes in for the crew and there are some sad faces among the teams. The ambulance arrives and a man says to call CPD as the queen is on a rampage. Sylvie says it’s Cleopatra! Sylvie manages to calm the queen down, reminding her that her pills calm her down.

Ritter asks Severide about them answering to some Italian chief out of Station 19, named Murphy. Severide says Boden will keep an eye over them, but no one is really convinced. Joe is happy to be back but reveals that he knows Severide got into trouble for saving his life. He doesn’t know how to thank him, Severide says to give him a beer later and call it even, they shake on it; Kidd smiles.

Violet, Ritter, and Gallo continue talking about opening a flower business at Molly’s while Sylvie manages to take a low-key exit with Matt. Mouch and Herrmann joke that everyone knew they were together a year before they did. Stella makes Severide a drink, hoping it will help him call his mother and tell her they are getting hitched. He isn’t afraid to call her, just doesn’t want to hear her reaction. Chief walks into the bar, but not for a drink only wanting to talk to her as he saw she was concerned after he made his announcement.

Stella says the house actually is a family because of Boden and not because of her because she is gone when the next LT spot opens. He thinks she wants him to turn down the job but she says 51 will change the minute he leaves and finally admits he can never leave.

Sylvie talks to the previous shifts’ medics and doesn’t like their attitudes. Ritter, Gallo, and Violet continue to bicker about silliness when it comes to their proposed business. In the meantime, Boden goes to see Gloria, asking to have his headquarters at Firehouse 51. She reminds him of the politics involved and she is not going to make an enemy of the Alderman appease Boden; he is very displeased.

Joe is struggling on the phone with Chloe about his baby shower costing more than his wedding. Herrmann offers the patio for free for the shower. Severide tells Stella that his mother surprised him, saying that his marriage will fail just like Benny’s, but they have no chance to discuss it as the alarms sound and all crews head out.

There is a structure fire, a mother informing Boden that her son is on the third floor. Casey and Severide bark out orders to their crews; Joe Cruz having a difficult time placing on his mask for the first time since he’s almost drowning. Casey tells Kidd and Gallo to get the roof as a kid is spotted waving from there. The aerial ladder is raised and the team gets to work. Boden orders them to be careful as he cannot see how quickly the fire is moving, Casey assures him they are being careful.

Casey is stuck in the opposite corner of the kid as the roof collapsed; Kidd and Gallo are on the 4th floor where the fire is blazing. Severide and Cruz are also on the 4th floor, but there is a wall between them. Matt attaches a rope to him that Mouch holds onto and he crawls along the side of the roof toward the young boy. Boden learns Severide has Gallo and Kidd, he orders them to wrap up their search and evacuate. Matt tells the boy to hold onto him tight and he swings off the roof, everyone smiles and gasps, Mouch tells him “nice swing” and Matt says, “nice catch!”

Once everyone is safe and back on the ground, Boden observes everyone with pride. Back at the firehouse Boden stops everyone and tells them he has never been prouder of this group, not just because of the incredible job they did today but because of who they are and always looking out for each other for over 10 years and that is unheard of in the fire service, Big changes are coming but the most important things coming and what he wants them to remember most is that they will always be a family, no matter where they must go.

Gallo talks about what it feels like falling through a roof and all the thoughts but not one of them was thought about a business. Herrmann finds Cruz and demands to know what is going on. He says he is “off”, but it’s probably the mother-in-law and the baby shower. Sylvie tells Matt she never wants him to do that ever again. Tony calls them lovebirds and they simply take it in stride.

Ritter, Violet, and Gallo are at Gallo’s and taste his homemade beer, suddenly realizing that THIS should be their business. That they should create their own brewery; there is a knock at their door and Herrmann interrupts them, saying he needs to talk to Gallo’s cousin.

Meanwhile, Herrmann and Mouch bring a blindfolded Chloe and Joe into Molly’s back patio for the baby shower. Chloe is thrilled. Stella walks up to Chief Boden, apologizing. He says she doesn’t need to apologize. He reminds her that her leaving will affect the firehouse just as much as he’s leaving and every change makes a little shift in the foundation but they just have to trust it is strong enough to hold.