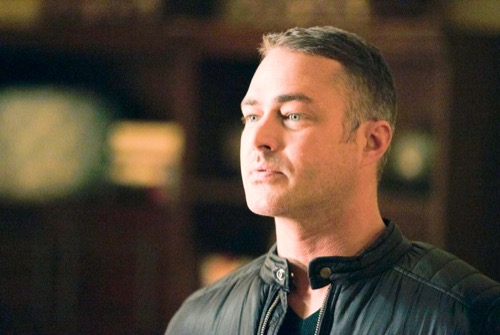 Tonight’s Chicago Fire season 9 episode 5 looks like it is going to be great and you won’t want to miss it.   While you’re waiting for our recap make sure to check out all our Chicago Fire recaps, news, spoilers & more, right here!

In tonight’s episode Casey asks Severide if he is going to speak to Kidd because she stayed the night with Brett, he says no. Station 51 gets a call, it is a fire and Herrmann said his fortune cookie said it was his lucky day. The fire is downtown, Casey tells them to expect some stair climbing. Herrmann asks a guy named Trevor, who is a maintenance worker, to take them up to the eight floor. Cruz and Holly, who works in the building, is also in the elevator. All of a sudden, the elevator stops, then there is some kind of blast.

Trevor has some barrels that fell on his leg, Herrmann and Cruz try to get them off of him. Trevor’s leg is freed but the elevator fell a few feet and looks unstable. Herrmann calls chief Boden, but nobody hears him. Trevor’s leg looks broken, Cuz tells him they find something for a splint, wood and duct tape. All of a sudden, they kind of hear Casey and Severide on the radio but it is scratchy and they can barely hear each other. Herrmann calls out for anyone, nobody hears anything. Holly says she shouldn’t be there, she only started three weeks ago, she was a restaurant manager and because of COVID lost her job. She worked fine dining, a Michelin star, she had no choice but to take this job. Cruz and Herrmann manage to open the elevator doors, they stuck between doors and still nobody can hear them.

Cruz sees a hatch door, he stands up on some barrels to get up there. Victor talks about his son, who is a navel officer. Cruz says that Chloe just told him that she is pregnant this morning, she tells Herrmann that he can’t tell anyone. Herrmann tells him that he is going to make a great day, kids are the best thing in the world. Another cable lets go and the elevator falls again. Cruz gets the wind knocked out of him. Holly asks how many cables are there, Cruz says there are two more and one is strong enough to support them. Cruz says he learned from his buddy Otis about elevators.

Holly goes to sit with Trevor and console him. Cruz and Herrmann are behind one of the barrels, he tells him that if they fall again, they fall all the way and he doesn’t know what to do. Holly asks if they are going to die, Herrmann says he is sure they are not going to die, his fortune cookie said today was his lucky day. Herrmann asks Cruz what Otis would do. He says open the panel and work his magic, try to bring the car up a few feet so they can get back up on the rails.

Holly says they are never going to make it out of there, they are going to suffocate. Herrmann tells her to talk about something else. She says everything is falling apart, a disease wiped out so many people, her sister had miscarriage with no warning and blew her marriage up. Herrmann talks about when his wife was pregnant for the first time, she fell on patch of ice when she was six months pregnant. They went to the ER and she kept saying she was fine, she was right. That is the story of his first born and he is twenty one now and he is a great kid. He says there is more good than bad out there and he promises her that. Victor says he had his kid young, just out of highshool, it just happened. Then his son married a mean woman, she poisoned him and he hasn’t talked to his father in over a year. He doesn’t know how to rectify that.

Herrmann tells Cruz to think like Otis. He has the panel open when they hear chief Boden, Herrmann tries to reach out to him, but nobody hears them. All of a sudden they hear a loud noise and the elevator drops again. Holly smells smoke, Cruz tells her it is going to be ok, they are going to get out of there. Herrmann keeps shouting into the mic but nobody hears them. Holly sees a reset switch and goes to flip it, sparks are everywhere, she gets electrocuted but she is stable the best they can tell. She has second degree burns.

Cruz is back to working on the panel but it is fried. Victor says he can tell by their faces that this is not good, he would love t play poker with them. Victor tries to move over to Holly, he wants to keep an eye on her. Herrmann says he is sorry that Holly is hurt, but grateful for the peace and quiet. Victor says she is not that bad, she is really nice, she works hard and she brings him coffee every morning. Herrmann asks Cruz if he remembers what he said the first day he met him and Mouch, he said my name is Joe Cruz, you don’t know me, but you can count on me.

Cruz smiles, says he kind of remembers that. Cruz digs a hole in the floor of the elevator, Herrmann makes a funnel, they pour some flammable paint thinner out to take some of the weight off, then they hear Mouch on the radio, he is in distress. Herrman tells Cruz that Mouch is going to be ok, he knows so. Cruz asks him what if Holly is right, he says she is not right. Cruz starts to panic, he says the pandemic, he started to freak when Chloe told him, the country hates each other. Herrmann tells Cruz that they came from different worlds and made a happy home and that is the country his baby is going to wake up to everyday. You have to have a solid family to balance things out.

Holly is awake, she asks Herrmann how he stays hopeful. She tells them they are so nice and she was being so awful, she is not good at handling being scared. The elevator drops again. All of a sudden, sparks start again and hit the paint thinner, but after a little smoke they are ok. Cruz tries to go back up through the hatch, but they stop when they hear them trying to save Mouch. Herrmann tells Cruz to keep working. Holly asks who is Mouch, Herrmann says about the best guy you could ever meet. They have been firefighters together for over twenty years. Holly says she hope he is ok.

The smoke is pushing down on them, there is an air pack, Herrmann tells Victor to share it with Holly. Cruz finally got he cover off the hatch. One by one, they start to leave the elevator. Cruz is the last one and he loses his footing, but manages to get out and on top of the elevator. They hear about Mouch, he is ok. Herrmann calls on the radio, chief Boden now hears them, they are stuck in the east elevator shaft. Herrman says he told them they would have his luck when they needed it. A door opens, they are saved.

Brett says Victor’s leg really looks broken. Holly apologizes to Victor for panicking, then he asks her if she will have lunch with him some time, she says yes.

Herrmann tells Cruz that he is happy to have been with him in that elevator today. Cruz says he felt like Otis was with them. Mouch comes out of the building, Herrmann runs to him.