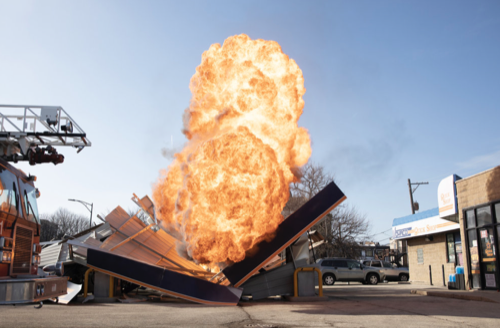 Tonight on NBC Chicago Fire returns with an all-new Wednesday, February 10, 2021, season 9 episode 6 called, “Blow This up Somehow,” and we have your Chicago Fire recap below. On tonight’s Chicago Fire season 9 episode 6 as per the NBC synopsis, “Gallo makes a split-second decision during a dangerous fire rescue, leaving Casey steaming that his direct orders weren’t obeyed; Kidd feels a strain in her relationship with Severide; Brett and Mackey search for answers after some suspicious calls.”

In tonight’s episode, Brett tells Casey that she knows she asked for space, but she is glad they are speaking again. Gallo is making breakfast, Herrmann asks Cruz when he is going to tell everyone his news, he says in a few weeks just as Mouch walks up asked why the two stopped talking, was it about him. Cruz says no and he is saved by the bell, the alarm goes off.

They arrive on the scene of what appears to be an accident near a gas station and there is free-flowing gas. All of a sudden there are sparks, Casey shouts for everyone to pull back as there is an explosion and fire. Casey asks Herrmann where the foam is, Severide says they can’t wait so he and Casey go inside. We can hear a baby crying, Severide rescues him.

Everyone returns to the station, Kidd goes to speak to Severide but feels tension, so she walks away. Gallo walks into the kitchen, Mouch tells Mackay that Gallo saved this girl who was under a canopy just before the whole thing blew up. Casey calls Gallo into his office, he tells him that he gave him an order on that call. Gallo says yes, but he spotted the victim and the shut off wasn’t going to help if she was all covered in gas.

Casey says the order he was referring to is no one move in until he says so. Gallo says she would be dead if he didn’t go in. Casey says he was lucky that he is not dead, he should have called for backup. Gallo says with all due respect, he knew when he hired him that he was quick to act and he deserves the benefit of the doubt. Casey tells him to pack up and go home, he can’t be his babysitter, and he can return when he gets his head on straight.

Mouch corners Cruz in the hall says he knows what the whispering was about and he should just say it to his face.

Mackay is in the ambulance with Brett when they get a call. There is a woman on the ground, she is having a seizure. There is a man with her, but he says he has only known her for a few months. Brett tells her that if she hasn’t had one before it is really important for her to go to the hospital, this can be really serious. The woman walks off and the man runs after her and says he will try to speak to her.

Cruz tells Herrmann what Mouch said to him in the hallway. Ritter walks in, they tell him something is going on with Mouch, they need his help since he is close to him. Ritter says no, he doesn’t want to do it. Mackay walks in and asks the guys if they think Casey was a little hard on Gallo, he saved that woman. Herrmann says the captain has to make tough calls.

Severide tells Casey he saw Gallo packing up his things and banging around some stuff. Meanwhile, Brett is speaking to Kidd and says it is rare for Casey to lose his cool, is something up with him. Kidd is really not listening, then she asks Brett what if everything she thought they had is wrong. The alarm goes off, Brett tells Kidd she is there for her, anything she needs.

On her way out, Brett bumps into that woman Casey rescued on a call, Sidney. Brett doesn’t take any notice and just gets in the ambulance and leaves. Brett and Mackay arrive at the call, a man is bleeding a lot. He is in a lot of pain, she gives him the maximum dose of Fentanyl but it doesn’t do anything to help. Meanwhile, at the station, Kidd goes to see the chief and thanks him for some books he gave her to study. She asks him if it would be possible to postpone the test for a year. He tells her that waiting is a gamble. She says she is grateful but she doesn’t want Girls On Fire to fall through the cracks. He tells her to take a few days to decide, don’t make a decision right now. She says ok.

Chief Colson comes into the station to speak to Brett, chief Boden is there as well. There is an issue with the victim who almost sawed his leg off. She says he was stable when she brought him in. Colson says the docs were concerned that he had no response to a maximum dose of Fentanyl. They did some tests, he had no Fentanyl in his system. He asks her how well she knows her new partner Mackay, they have seen this before, swapping out drugs for saline. Colson says he has to open an inquiry.

Ritter drops by the bar and sits behind Mouch to have a drink. They start talking, Ritter asks him if there is anything new with him. Mouch asks what he means. Mouch is suspicious, Ritter says he is just making conversation.

Brett, Mackay, and Cruz are talking, they try to figure out how the meds could have been switched. Brett remembers the girl that didn’t want to go to the hospital who had the seizure. When Brett and Mackay attended her their bag was left on the ground and her boyfriend could have switched something out.

Casey is out with his new friend, she invites him up to her place but he says no. She asks him if it has anything to do with a certain paramedic, it is impossible to see how he looks at her. He tells Sidney that he wishes he was in the right place for this now, but he is not. She tells him he has her number.

Mackay goes to See Gallo to make sure he is ok, she says she was hoping he is not moping around and feeling sorry for himself. Gallo says everything that happened with Casey is on him. He offers her a beer, she says no, but goes inside.

Mackay stayed the night, she tells Gallo that she has to go. He asks what is this, she and him. She tells him it is just fun for now, no rules. Gallo says nobody can know at the firehouse, he can’t have Cruz knowing about this.

Casey is having a coffee, Severide says he is keeping his distance from Kidd because he wants everyone to know that she did it on her own. Once she takes the test, they can patch things up. Casey tells him that is one heck of a gamble. Casey tells him being with anyone else but Brett is hard.

Brett and Mackay go to 911 to speak to Hannah and try to narrow down who the man and woman was with the seizure, but they have no luck.

Gallo is back in the station, he sees Boden and says he doesn’t even know if he should be there. Casey walks up and asks him if he is ready to work, he is going to run some ladder drills.

Kylie slips that Kidd is skipping on her test to Severide, he is concerned.

Hannah at 911 calls Brett, they just got a similar call to the seizure one the other day. She and Mackay head over there, it is the same two people. Mackay called for backup, the two get taken into custody. Chief Colton is there, he tells them nice work.

Cruz tells Herrmann that docs said everything is ok, they should be telling people next week. Mouch walks up and they stop talking again, he says he doesn’t care who knows he has had enough of this. Mouch pulls down his pants and bends over, he got a tattoo of Trudy’s name. Mouch says he lost a bet and was trying to keep it in the marital vault, but someone had prying eyes. Cruz says that is a secret he didn’t want to know just as Gallo walks in, he says she showed up at his place, he didn’t ask her to go over there, it just happened. Gallo thought the comment was for him, Cruz says he is going to kill the two.

Mackay thanks Brett for having her back. Cruz walks up and tells Mackay that she has some explaining to do, Brett says she is going to mingle. Casey sits down with Gallo, he says he is his captain, he has to answer to his safety and he doesn’t want to lose him. He tells him that he robbed him of his accountability and it can’t happen again.

Kidd hears a knock at the door, it is Severide. He tells her that she has to take the test, he has been MIA because he thought it was better for her. People are saying the only reason she is moving up the ladder is because of him and he didn’t want people to think that. She says she doesn’t care what people are saying. She says he shut down on her like the bad days. He says that bad attitude is why he knows she has this and he knows that he screwed up, and he is never going to let her go. They make up.