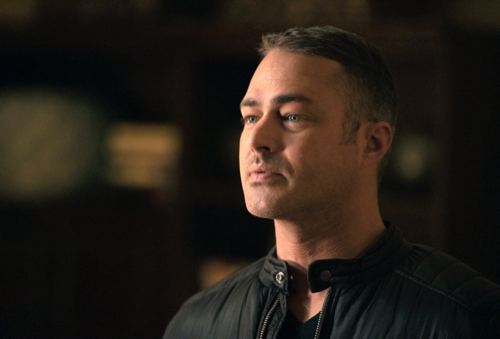 Severide thinks he and Stella should get away for a while. They were dealing with freezing temperatures in Chicago and he thought they should go somewhere warmer. Like a beach or something. Severide made the suggestion because he wanted them to focus on getting their relationship back on track, but Stella couldn’t go anywhere because she wants to take the lieutenant’s exam, and as it turns out Boden hadn’t removed her name from the list. He knew that Stella would change her mind again. He also knew that someone like Stella couldn’t put off this test for long and so he did her this favor. He kept her in the running. She can now take the test like she originally planned and it’s what she wanted more than anything.

Stella was happy she could still take the test. She was celebrating when she heard even better news from Cruz. Cruz and his lady were having a baby. He revealed it to everyone tonight. He also handed out Cuban cigars and so that made everyone extra happy. Hermann got two cigars for keeping this secret this long. He had been feeling the heat to gossip and so he was happy that the news was out there now. They can all be happy for Cruz. He was going to make a wonderful father. He and the others later got called to a fire and Cruz almost got beheaded by a piece of shrapnel that flew in his direction. Cruz got lucky that the piece of metal only cut his face. He told his friends that he was glad that he still gets to see his firstborn and so he was ready to make a joke of what happened.

Only people had been genuinely worried. Gallo had tried asking Cruz about it after everything was settled down and Cruz almost bit his head off. He didn’t want to talk about almost dying. Cruz had come close to losing everything and he seemed extra sensitive about that when he wasn’t making jokes about it. He didn’t know that Gallo was asking because Gallo knows how much Cruz means to Gianna. Gianna and Gallo were secretly seeing each other. They couldn’t see each other out in the open because she grew up with Cruz and he treats her like a sister. He’s super protective of her. He doesn’t want her dating firefighters and she was breaking one of his rules by seeing Gallo outside of work.

Cruz wasn’t going to like it once he finds out. Thankfully, he was clueless right now because he was focusing on the baby and not letting Chloe know how close he came to dying. Chloe saw a bandage on his face. She asked what happened and he claimed it was a cord that got loose. Cruz blatantly lied to her. He thought he was protecting her by keeping the truth to himself and yet how can she feel secure being lied to. Cruz was making a mistake with her. Meanwhile, the fire they responded to might not have been an accident. The fire happened at a homeless encampment and so everyone just assumed that one of them caused the fire with whatever heater they were using but then a girl came to the firehouse with her concerns.

Vanessa told them that the man that runs the encampment runs a tight ship. Big Jim tells everyone which could of heater they can use and he sends people away if they break the rules. He did that to a guy named Dixon. Dixon made a big scene about being kicked out. He threatened to come back and that’s what the girl thinks happened. She thinks Dixon started the fire. Vanessa informed Casey and Severide and they tried to return to the scene to investigate, but by then, all the evidence had been swept up by bulldozers. Someone from the neighborhood called it in and so the bulldozers arrived first thing the next day. They swept out everything. The encampment was no longer visible and so the guys didn’t know how to find the evidence they needed to open an arson investigation.

Only they later ran into Dixon. Dixon had been going through the clothes that were salvaged and the moment they asked him his name – he ran. He got away from Severide and Casey and so that made them even suspicious. They next went to see Big Jim. He was going to be okay because he suffered some burns and so he was able to talk to the guys. He told them that he had found contraband at the encampment. He found propane tanks and he was about to search for the culprit was when someone began shouting fire. Big Jim said he found the propane tank outside his tent. It was clear to both Severide and Casey that someone had been trying to kill him and so they brought this to the arson investigator.

The investigator told them he couldn’t do anything with what they brought him. He didn’t have a crime scene because it had been clean up and he didn’t have a suspect because Dixon had runoff. The arson investigator said he would have to put this case at the bottom of his pile. Neither Casey nor Severide were happy with that and they did their best to keep their case alive, but they didn’t have evidence and they were just about to give up when they found out some of the guys turned Cruz’s shrapnel into a plaque for him. They wanted to commiserate the day he was almost Ned Stark’d. And Cruz hated it because he admitted to the guys he lied to Chloe so that she wouldn’t worry and he didn’t want the plaque destroying his well-crafted lie.

But it didn’t matter anyway because Severide broke the plaque to get the shrapnel. He thought the shrapnel could be considered the evidence and the arson investigation turned into a murder investigation when Big Jim died. His death had taken everyone by surprise because they had been told his wound was superficial and that he was getting better and it turns out there was more going on underneath the surface. Big Jim. He was a good man and the guys got justice for him. They checked into the nearby stores that sold the propane tank and they found their guy. It wasn’t Dixon. It was one of the upstanding neighbors. The neighbors have been complaining about the encampment because it brought down property value and so one of them started a fire.

Alan Wicker was later arrested for the murder of Big Jim. He was going to miss on the increase in property value now and in the meantime, Darren got Vanessa a place to stay. He felt for her after she lost her home when her tent burned down. She also hadn’t been able to go to a shelter because those places weren’t safe for women and so Darren found her place that would be safe.

Also, Cruz found out about Gallo and Gianna’s situation and he ignored it because he has bigger concerns with a baby on the way. He was so disinterested that Gallo was worried that Gianna would lose interest as well. He thought he appealed more to her as the forbidden fruit and now he’s just plain fruit.

And Brett agreed to a date with Granger after he was there for when she got called to a clown funeral. It turns out she’s deathly afraid of clowns and so it’s a good thing Granger was there to protect her.

And Cruz was going to come clean with Chloe about his accident, but then she told him they were having a boy and so he completely forgot about his lie.