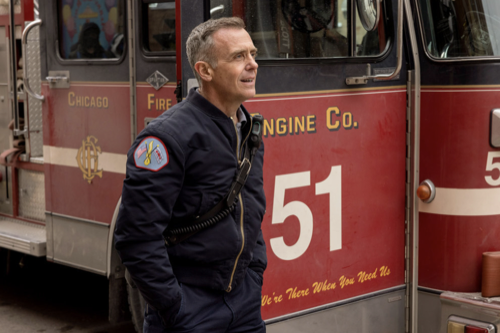 Tonight’s Chicago Fire season 9 episode 12 looks like it is going to be great and you won’t want to miss it.   While you’re waiting for our recap make sure to check out all our Chicago Fire recaps, news, spoilers & more, right here!

In tonight’s Chicago Fire episode, the episode begins with Brett at the doctor’s office with Casey who is inside with the doctor getting examined. Casey comes out of the room and tells Brett that he has to get an MRI, it’s possible that repeat trauma has left behind permanent damage. He is having mini seizures right now and it could turn into full-blown seizures. Brett tries to calm him and tells him not to panic before they have all the information.

Casey tells chief Boden and Severide about his doctor’s visit, they both say they will help out to fill the void in the meantime.

Before roll call, Ritter and Gallo ask Herrmann if they can take up a small space at Molly’s to meet with a group of young firefighters, he says ok. Chief Boden walks in and tells everyone that due to medical concerns, Captain Casey is going to take the next two shifts out. The alarm goes off, everyone leaves.

They arrive at the scene of a fire, Mouch, and Kidd go inside, there are small explosions all around. Gallo pulls out a woman who is screaming for her daughter, she can’t find her. Herrmann and a man inside the building save another person while Mouch is inside still looking for the six-year-old girl.

The fire cannot be contained, Chief Boden calls everyone out just as Mouch finds the little girl. Mouch comes out with the little girl in his arms just as a blast goes off and knocks him to the ground, but he is ok and so is the little girl. Gallo congratulates Mouch, Herrmann laughs and tells Mouch that he had to steal his thunder – he did this pretty sweet rope rescue, him and this guy who is a natural-born firefighter. When Herrmann looks around for him, he’s gone.

Gallo and Ritter tell everyone about Mouch’s save when they get back to the station, Casey congratulates him.

Herrmann heads back to the scene of the fire and finds Mason, the natural-born firefighter, and finds out that he was stationed in Colorado. Herrmann tells him that he has been doing this long enough to recognize raw talent, he can always apply with the CFD. Mason says he was a firefighter in prison, the CFD won’t hire felons.

Casey thanks Gallo for staying on him about the headaches, it is what prompted him to get it checked out.

Herrmann sits down with Mouch at Molly’s and tells him about Mason, he stole a car when he was a teenager, he did three years for it. Mason walks in, Mouch tells him that it was impressive what he did. Meanwhile, Brett apologizes to Grainger for canceling the ski trip with him, he understands and says they could do it another time. To make up for it, she invites him to an omelet festival.

Casey is having a beer with Severide, he says he grew up with a family full of secrets and he is working on opening up more. Casey tells him that since Brett found out, she has been by his side every step of the way and she will be with him at the MRI tomorrow.

Casey is at his MRI, Brett is with him and she prepared a play list that he can listen to while he goes through the procedure.

Herrmann confronts Kitt and tells her that he needs a big favor, a meeting with Deputy Commissioner Hill.

Brett asks Casey how terrible was the playlist, he says it was horrible, they both laugh.

Ritter tells Gallo that they have fifteen confirmations for their meeting but they need an agenda. Mouch overhears and says they need the bullet, Mike “The Bullet” Thompson, he is retired now and goes around the country speaking to groups – Mouch says he will reach out to him for them.

Chief Boden finds someone parked in his spot, again, so he puts a note on the guy’s windshield.

Kitt knows why Herrmann wants to speak to the Commissioner, she tells Severide and says she doesn’t know if she agrees with it because there are a lot of other deserving people out there. Casey goes to see Brett and tells her that when he gets the results he is going alone, he is making too big a deal of all this and her tagging along just doesn’t make sense. The alarm goes off and Brett has to go.

On the scene, Amber has her arm stuck in a ball machine at a tennis court. They take the machine apart and get her arm out, but she is bloodied and cut up pretty well.

At the station, the note is still on the vehicle in Boden’s parking spot. Kitt tells Hermmann that she got him a meeting, ten minutes, and they need to practice what they are going to say, no room for error, she wants to make a good impression.

Gallo and Ritter tell Mouch, they don’t need “The Bullett” they want him instead. Mouch says he will check his schedule and see if he is free.

Casey is back in the station, she tells Brett that she is going with him at, end of the story.

Herrmann and Kitt are in the meeting with the commissioner, he tells her about the policy for felons, he wants to know if something can be done to change it. She says she appreciates their passion, but the CFD is an elite group of men and women and some people can’t be firefighters no matter how much they want it.

Chief Boden heads outside and catches the guy parked in his spot, he comes out in a rage and finds a man with a nun in a wheelchair and Boden feels bad. He tells the guy he can park there anytime, the space is his all day every day. The nun tells Boden to say ten Hail Mary’s for the filth that was on his note.

Herrmann and Kitt tell Mason that he has an interview with the St. Paul fire department.

Brett is with Grainger on her omelet date when Casey calls her, she tells Grainger that she has to go. He tells her that she left out the friend that she is helping is Casey. He tells her he doesn’t think it is a good idea to reschedule, she has some stuff to figure out. Brett arrives at the doctor’s office, Casey is told the pain in his shoulder is likely caused by the injury he is recovering from, not from the brain. His MRI is clean.

Brett asks about the headaches, the doctor says it is most likely from a concussion. Brett hugs Casey, he swings her around. She looked like she was going to kiss him, but the moment passed. He tells her time to head to Mollys and celebrate.