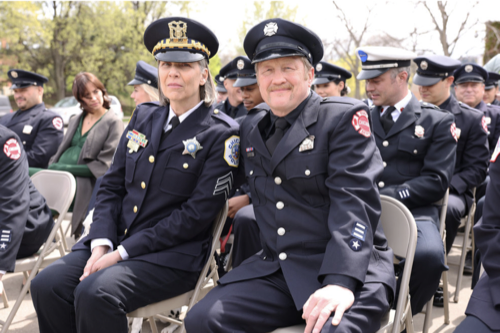 Tonight’s Chicago Fire season 9 episode 15 looks like it is going to be great and you won’t want to miss it.   While you’re waiting for our recap make sure to check out all our Chicago Fire recaps, news, spoilers & more, right here!

In tonight’s Chicago Fire episode it begins with Kidd, she wakes up and finds Casey and Severide in the kitchen, she says she is grateful for passing. She is heading out to have coffee with someone else who passed and will meet them at the firehouse. Severide tells Casey that maybe this whole marriage thing was not the best idea. Casey says it is the nerve talking. Severide remembers her saying she would never marry again because she doesn’t want to be in a position where she can’t leave.

Cruz and his wife are looking at a new place to live, she says it is a little more than what they were expecting, he says they will figure it out. He leave her to work out the paperwork, he has to get to shift.

At the firehouse, Boden says that one firefighter will get the award of valor, Mouch. Although, due to the pandemic, it cannot be the usual big event. It will be a small socially distanced event, and both Gallo and Ritter will be making the arrangements.

Brett tells Casey that she misses the cat, he tells her she needs other entertainment. Casey gets called to the phone, its Dawson. The alarm goes off. At the scene, there is a small plane that appears to have landed on the side of the building. The pilot says the cable snapped. Cruz tries to reassure the pilot that he is going to be ok and this will be a great story at cocktail parties. He gets him down, Brett and Violet take a look at him. The man says Cruz is a Rockstar.

Boden calls in Casey and Severide, he wants to talk about Kidd’s future because there is no place for her at 51, unfortunately, she will have to go elsewhere and he wants to place her at a good house. He asks them not to mention it to her yet, he doesn’t want to get her hopes up.

Casey tells Brett that Dawson says hello, you can see that Brett is annoyed. After, Violet asks about Granger and Brett tells her that they broke up.

Gallo and Ritter are planning the event, they want to do it at Molly’s on the patio – when Violet overhears, she steps in to help.

Mark Newcomb, the pilot who Cruz saved, drops by and gives him a bottle to thank him. He goes on to say he googled him and saw his invention the Slamigan. Mark tells him his worries are over, Venture Capital is what he does. Mark wants to give him cash to take Slamigan to the next level. Cruz is shocked that he wants to invest in his company, Mark says no, he wants to invest in him. He says he is going to change Cruz’s life.

Cruz is so excited, he tells Brett about Newcomb, she has always believed in him, so he wanted to tell her first. He says he has to provide for his child. Brett thinks he may have to quit the CFD, Cruz says no, he will do both.

Gallo, Ritter, and Violet tell Trudy about their plans to host the event at a swanky private club, she says no, not for Mouch, it should be on soldier field, on the fifty-yard line. One of them needs to go down to the stadium and plead their case in person, Ritter says they are better all going together.

Severide asks Casey how it was speaking to Dawson, he says a little weird, it has been a while. Severide gets a call, the lieutenant at 66 may be retiring this year.

Cruz meets with Newcomb and finds out that he has to choose, be a firefighter or be rich. Cruz says he needs to sleep on it. Newcomb tells him that he is trying to change his life, Cruz says he likes his life the way it is.

Cruz goes to speak to Brett, she asks her if he made a huge mistake. Brett tells him that he is his own man and that means a lot in this world.

Casey goes to 66 to pitch Kidd in case the lieutenant there retires. They can’t make any guarantees, but they will put her at the top of their list.

Violet, Gallo, and Ritter are at the stadium, they support first responders but they have something planned already for a fundraiser. The three don’t stop, they keep pitching and then Violet says he is dying, Gallo says he is blind – they are desperate. Back at the station, Trudy is there, she wants to know how it is going – but Boden walks in and says that the event will be held in the fire station, the three are relieved.

Cruz receives a huge bundle of baby toys and a card from Newcomb that says they are going to make a lot of money together.

The siren goes off, Violet and Brett arrive on the scene. Two women got into a fight, one grabbed the other braids and has blood all over her hands. The fight was because of a boy. The girl has cuts on her hands and will need stitches.

It is time for the ceremony, Boden is at the pedestal talking about Mouch, Commissioner Hill is there, she takes the medal and puts it around Mouch’s neck. Mouch says 51 is the best place in the world, he loves them. Newcomb pulls up, he sees Cruz’s wife, and says hello. Cruz walks up and asks him if he can speak alone with him. Cruz asks what he is doing. Newcomb tells him that he doesn’t like to let opportunities slip through his grasp, they have an oral contract. He wants Slamigan, and he means to have it. This doesn’t have to get ugly, he is offering him a deal of a lifetime, he tells him to take the money.

The siren goes off and 51 responds to a fire. Inside, Severide and Kidd are fighting through, they have to break a window to get out. She tells him that she will never leave him, he takes off his helmet, he tells her he never wants her to leave him, she takes off her helmet. Severide gets down on one knee inside the fire and asks her to marry him, she says yes.

Boden and Casey are leaving the firehouse, he tells him that some changes might be coming to 51, time will tell.

Cruz heads back over to see Newcomb who says it is a nice surprise. Cruz grabs his hand and tells him that he needs him to understand something, he has no idea who he is and what he is capable of, and if he comes near his wife or his firehouse again, he will find out. Newcomb tells him that he can’t stop him from walking away from a fortune.

At Molly’s, Casey says the next drinks are on him. Gallo goes to the washroom and bumps into Violet, who kisses him. Brett leaves the bar, Casey sees her leave, he tells her that after the ceremony that he and Dawson had a great conversation. It made clear what he already knew, they will always care about her, but he is not in love with her. She is his past, her, he is in love with her and nobody else. Even if that doesn’t change anything for her, he needed her to know it.