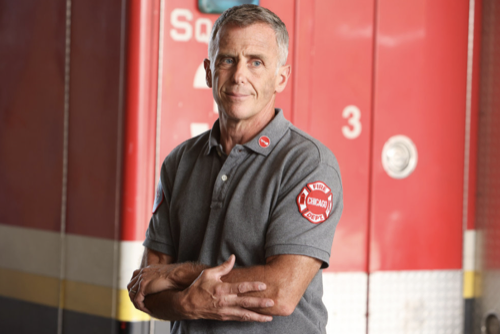 Chicago Fire begins tonight with Sylvie Brett (Kara Killmer) is studying about a private ambulance service when Matthew Casey (Jesse Spencer) walks in, saying nice work as she explains she is going to write up a plan for CFD to see if it will work; the two hugs and kiss as he calls her amazing.

Chief Wallace Boden (Eamonn Walker) is getting help packing up his office meanwhile Casey walks in to catch Ritter (Daniel Kyri) and Blake Gallo (Alberto Rosendo) are watching a video about a guy nicknamed “Firefly”. They are talking about making a Tiktok account for Casey and he declines. Randall McHolland (Christian Stolte) and Christopher Herrmann (David Eigenberg) are talking about the little library they built at the end of the driveway for people to take a book or leave a book, Tony (Anthony Ferraris) brings some books to add. The alarm sounds and the crews are off.

They arrive to find a car stuck underneath a tractor-trailer. Casey and Kelly Severide (Taylor Kinney) quickly assess the situation, while the fire crews use fire extinguishers and hoses to put out the fires. Joe Cruz (Joe Minoso) begins to panic in his mask.

Joe pulls back and rips off his mask as Severide and Stella Kidd (Miranda Rae Mayo) take over under the trailer, bringing the patient onto the board. Cruz watches as they lift the patient and Stella looks at Cruz. Ritter and Herrmann stay to see if the fire will reignite also putting a chain on the car to remove it.

Back at 51, Stella checks on Cruz, saying she was there and it was no big deal to step in. Two girls approach the firehouse and want to take a selfie with Casey as he is now a celebrity on video, but he suggests they also take a picture with Stella who runs a program calls “Girls on Fire”; and they proceed to follow her. The guys mock him for “showboating!

The crew remaining at the scene, manage to remove the car from under the trailer and hear a noise, when they peel the roof back they find a car seat and a tiny toddler laying on the floor; the nearest ambulance is 15 minutes out. They feel he needs medical right now. He calls Brett on her cellphone who just ended her current call and she says they are 2 minutes away. They rush as Herrmann tells the child that help is on the way.

Brett and Violet Mikami (Hanako Greensmith) intubate him and rush him over to Chicago Med, leaving Christopher Herrman an emotional mess. Herrmann returns to firehouse 51, revealing there was a child in the car, devastating Severide who missed him. Joe Cruz can’t handle the news either.

Boden comes to see Matt in his office, saying the yelling of teenage girls is driving him crazy in his office but Headquarters wants it to continue because it is great publicity; Matt doesn’t like it. Meanwhile, Mouch is showing all the books he is placing in the little library he is placing outside.

Sylvie finds Herrmann in the locker room, revealing that the kid is stable. He admits that he called Cindy to take count of all the kids to make sure they were all safe and accounted for. Boden wants to see Sylvie and Herrmann immediately. In the office, they are forced to admit that they got the call and did an unauthorized call, which can cause suspension or termination. Herrmann says if anyone is at fault, it is him and he lied to Brett, saying that he got the consent from dispatch; outside the office, Brett says he didn’t have to take the hit for her.

Sylvie comes outside, seeing that Matt was asked to do an interview as per CFD’s request. He’s okay with it, as long as they chat to Sylvie too. Mouch is in trouble for putting some adult-rated books in the library and he promises to make some adjustments.

At Molly’s, Stella asks Joe if he is doing okay and he says he is okay but he deflects and says he is heading home as Chloe is going to be home soon. The patrons ask for them to turn the TV up as Matt’s interview is about to start, but something completely different airs. Severide arrives and Stella wonders if he’s noticed anything off about Cruz lately, so Severide promises to take a look at him. Cruz is found standing at the pier where he went down with the boat.

Casey is walking in with Stella and Severide when someone shouts that her friend thinks he is hot. Stella jokes that his news segment may not have aired but he is still a hot news item. In the meantime, Herrmann knocks on Boden’s door, asking if he needs to see him; it’s Boden’s last shift at 51. Boden hoped he could let this slip by but this time of action puts a serious mark on his record, asking if he wants to take this. Herrmann says it’s a small price to pay for a child’s life. He begs him not to say this to not mention it to Brett. Herrmann tells him not to make it sentimental and to have weekly coffees at a local deli.

Violet and Brett talk about their patients, trying to estimate how much time they spend on their frequent fliers. Their conversation is interrupted when Tony grabs two fire extinguishers and is screaming fire; the little library is on fire and Mouch calls it arson and wants to call the CFD fire investigators. His suggestion is interrupted when the alarms sound and all crews head out.

A man is stuck on the fire escape stairs and pinned down. Severide asks Cruz to go down on the harness with him, but he refuses so Capp goes with Severide instead. Casey is with Gallo, who uses a pulley system attached to his body to drop Gallo down to the stairs. Stella stays with Mouch who is using the ladder. Together Severide and Gallo are able to lit the patient up for Sylvie to take him.

Back at Firehouse 51, Gallo is given a lot of praise from the crews. Mouch asks Severide to stay as he needs his expertise to prove arson. Severide finds Mouch’s reading glasses, which were facing the sun and the library was wood, so that caused the fire. Boden drives in and orders him to clean it in by end of the shift.

The woman who was trapped in the car comes to the firehouse with her son, and she is introduced to Herrmann and Joe, congratulates him on the soon-to-be birth of his own baby. Cruz walks away into the locker room when Severide comes in, demanding to know if he is okay. Joe says he is 100% and feels great. Severide says that is good to hear.

Boden closes his empty office as Sylvie approaches him, saying she will hold him to being around. She explains she has a project to present but has to go through her new chief, which is Chief Hawkins, the one who hopes he never sees her again.

Ritter tells Casey that there are fans out to see him but he doesn’t want to deal with it. Matt hugs the man in the hallway as he is a dead firefighters son. He admits he needs help.